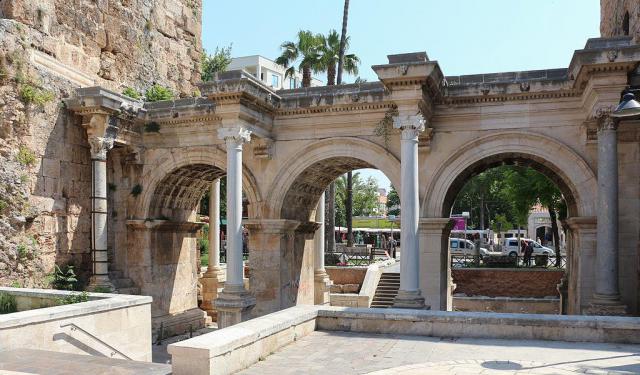 The principal appeal of Antalya is its wonderful natural splendor. Antalya boasts the finest Mediterranean climate: long summers, mild winters, and plenty of sunshine. Take a trip to this wonderful destination. The natural chic of Antalya is perfectly harmonized by its various ancient features. Kaleiçi is the heart of Antalya''s historic past. Check out this list of the top tourist sights that you might like to visit.
How it works: Download the app "GPSmyCity: Walks in 1K+ Cities" from iTunes App Store or Google Play to your mobile phone or tablet. The app turns your mobile device into a personal tour guide and its built-in GPS navigation functions guide you from one tour stop to next. The app works offline, so no data plan is needed when traveling abroad.

Karaalioğlu Park is a very large park in Antalya, situated just south of the Kaleiçi district. The park's attractions include the mayor's office, the city theater, and the ancient citadel, Hıdırlık Tower. The view from Karaalioğlu Park includes beautiful cliffs and the exhilarating Gulf of Antalya. Authorities plan to inaugurate a new history museum here in 2010.
Image by Ont on Wikimedia under Creative Commons License.
2

The tomb and Masjid (mosque) of Akhi Yusuf was constructed in 1249 to honor Akhi Yusuf, a sheik of the Akhi. Traveller Ibn Batuta visited the area in the 14th century and described the Akhis life of camaraderie in Antalya. He remarked that Akhis had done an auspicious work the like of which he had never seen before. The tomb is located south of the masjid with an entrance on its north side. Near the east wall of the masjid is a small fountain.
Image by Brbbl on Wikimedia under Creative Commons License.
3

Iskele Mosque is a very small, charming mosque in the old Yacht Harbor area. Historical documents are not specific about its time of construction, except that it was renovated as part of the Inner Bailey restoration project. Situated near the marina, this eye-catching 19th century mosque was built of white stone with a short minaret and is supported by four columns.
Image by Beth Rankin on Flickr under Creative Commons License.
4

Formerly the city walls enclosed the outside of the gate and it was not used for many years. This may be the reason why it has not been harmed, and it was only revealed when the walls collapsed. It is considered as Pamphylia's most beautiful Gate. The upper part has three apertures in the shape of a cupola, and except for the pillars is built entirely of white marble. The ornamentation is very striking. The original Gate was two storeys but little is known of the top storey. On either side of the Gate are towers, which are known not to have been built at the same time. The southern one is known as the Julia Sancta tower and is a work of the Hadrian era. It was constructed of plain stone blocks. While the base of the northern tower belongs to antiquity, the upper part is left over from the Seljuks.

Image by Cobija on Wikimedia under Creative Commons License.
Sight description based on wikipedia
5

The oldest structures in Kaleiçi are the remains of the city fortifications that surround this old-town area. Only the Clock Tower remains of the 80 towers that once formed this citadel. The beautiful Karaalioğlu Park surrounds this structure, which was converted to a Clock Tower in the 19th century. Overlooking the cliffs, this square structure is composed of both rough and hewn limestone.
Image by Emre Ergin on Flickr under Creative Commons License.
6

King Atallos II of Pergamon is thought to have founded Antalya in the 2nd century BC. His monument is located on Republic Square in Antalya, opposite the Clock Tower. It is an old monument but well preserved to this day, with an excellent location that draws thousands of tourists on a daily basis.
Image by Brbbl on Wikimedia under Creative Commons License.
7

7) The Yivli Minare Complex (must see)

Besides the famous minaret and mosque, the Yivli Minare complex includes other notable structures, such as a building once used as a lodge for the Mevlevi Dervishes. Two domed tombs are also located on the grounds: the tomb of Zincirkıran Mehmet Bey was built in 1377, and another was built in 1502 as a memorial for Ayşe Hatun who was the consort of Sultan Bayezid II, and mother of the next sultan Selim I. A former Islamic seminary, Atabey Aramgan Medresseh has been restored to function as a bazaar.
Image by Emre Ergin on Flickr under Creative Commons License.
8

Also called the Independence Monument, this stirring statue of Atatürk was built in 1932 in Republic Square (Cumhuriyet Meydanı), and is one of the largest and most remarkable monuments in Antalya. Visitors should take note of the pedestal which displays reliefs depicting various scenes from Turkey's War of Independence, and an inscription that was likely a rallying cry of the time. Another monument of Atatürk is located in Vatan Square.
Image by Berkegezer on Wikimedia under Creative Commons License.
9

Though the founding of Elmali is not known to historians, excavations show that the region has been populated for several thousand years, since the Bronze Age. Among the archaeological and historical treasures of Emali are the tombs of kings, a street ornamented with frescoes depicting hunting and fighting, and remarkable mosques. The so-called "treasure of the century" was excavated there in 1984, a collection of 1900 silver coins from the time of ancient Greek city-states.
Image by Elmalili on Wikimedia under Creative Commons License.
10

The Recep Bilgin Park is located near Yavuz Özcan Park in an extraordinary part of Antalya. It has a very unique design and many traditional historic buildings which will astonish visitors. The Turkish architectural wonders in Recep Bilgin Park always impress the many tourists. Near here you can see attractions such as Atatürk Monument, Yivli Minare Mosque, and much more.
Image by David Locke1 on Flickr under Creative Commons License.
11

Yavuz Özcan Park has been described as a peaceful respite in Antalya. This park is enchanting with its ponds, small cascades and lovely fountain illuminated at night with colored lights. Unusual sculptures and monuments can be found throughout the park, which is bordered by Konyaaltı Caddesi (Street). The abundance of various species of trees and flowers plus the scent of the Mediterranean sea will draw you back again and again.
Image by Brbbl on Wikimedia under Creative Commons License.