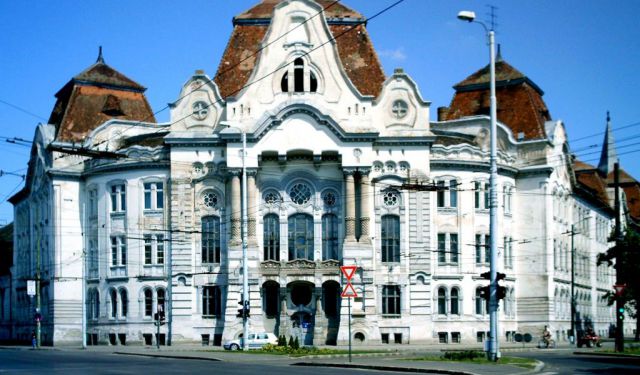 Timisoara is one of the largest cities in Romania and the capital of Timis County. Among the treasures the city boasts, there are architectural monuments (in Baroque, Art-Nouveau styles), which traveled through time to tell us about the various aspects of Timisoara’s past. This tour unravels the enchanting side of Timisoara.
Image Courtesy of Wikimedia and Turbojet.
How it works: Download the app "GPSmyCity: Walks in 1K+ Cities" from iTunes App Store or Google Play to your mobile phone or tablet. The app turns your mobile device into a personal tour guide and its built-in GPS navigation functions guide you from one tour stop to next. The app works offline, so no data plan is needed when traveling abroad.

The Army House is one of the most important military buildings of the 18th century; it was finished in 1775. Despite the fact that the building was transformed several times by adding extra floors, its architecture still retains elements of Baroque style. In 1924, the Army House held the Rose Exhibition, where for the first time black and blue roses were exhibited. Since 1996, the building houses the Military Museum.
Image Courtesy of Flickr and Erik G.
2

The House with Atlanti is a historical building, located in the center of the city. Its name is related to the columns with Atlantes, which can be seen on the building’s façade. It was built in 1812 in Neoclassic style by Toma Naum Makri. After the owner’s death, the House with Atlanti was inherited by his daughter, who was married to a Serb. The building changed owners many times, from Serb Church to Romanian State, and after the revolution it became private property.
Image Courtesy of Flickr and Attila Székely.
3

The building of the Chamber of Commerce and Industry dates back to the interwar period, the plans having been made by Laszlo Szekely. Chamber of Commerce, founded in 1850, has worked out of various buildings of the city, including Lloyd's Palace. In 1930 began the construction of the palace, which would become the new headquarters of the Chamber. Downstairs there is space provided for shops, while offices are located on the first floor and the council chamber and the other three floors are residential. The palace has two symmetrical facades, one on Surogat street and another on Lenau street. Some remarkable decorative elements include a great triangular gable roof and two statues representing the metallurgical industry and the domestic industry.
Image Courtesy of Wikimedia and Radufan.
4

The Piarist Lyceum is an architectural ensemble in Timisoara, initially built with the intention of being used as the building for the lyceum which was founded by the Piarist Order. The ensemble, which consists of the lyceum, the house’s headquarters, a church-chapel and a boarding school, was designed by László Székely in Art Nouveau style and was opened in 1909.
Image Courtesy of Wikimedia and Radufan.
5

One fine example of the first phase of Secessionist architecture is the Gemeinhardt's Peacock House (Casa cu Pauni). The house was built in 1905 in the residential area around the square of Piata Plevnei. The facades of the house are decorated with swans, peacocks, owls and other small animals and birds, skilfully combined with foliage.
Image Courtesy of Flickr and Attila Székely.
6

The building located in the Elisabetin district, is a monument built around the 16th and 17th centuries, according to some sources. The house has three levels: the ground floor, first floor and cellar roofed with a flattened cylindrical arch. The Turkish House has an ambiguous history; some say it used to be the summer residence of Timisoara’s Pasha, others say it was a harem or even that there was a secret tunnel between the home and fortress.
Image Courtesy of Flickr and Frantisek Trampota.
7

Constantin Jude Hall, also known as the Olimpia Hall, is an indoor sporting arena that can hold 2000 people. The arena also hosts various live concerts and performances. The design of the building is mainly in the functionalist style, the facade consists of eight red columns sustaining the white stone roof block. One of the main attractions of the arena is the outdoor fountain. The fountain represents five golden statues of the greatest athletes from Timisoara.
Image Courtesy of Flickr and Panoramas.
8

The Old Slaughterhouse, a red-brick building, was built in 1905; it is one of the amazing works of the well known architect Székely László. Initially the complex had 11 buildings, but successive demolitions resulted in keeping the figurative tower of its lateral halls and the entrance gate with its statuary groups. The latter represents on one side a bull and a female and on the other side a bull and a male.
Image Courtesy of Flickr and Attila Székely.