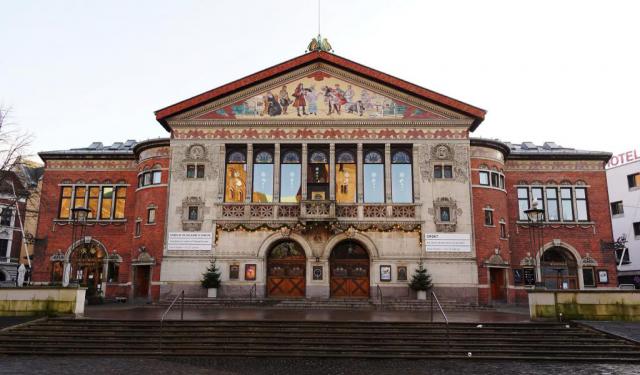 Image by Julaweric on Wikimedia under Creative Commons License.

Aarhus offers a variety of eye-catching historical and modern architecture, including numerous buildings designed by famous Danish architect Hack Kampmann. Don’t hesitate to spend a few hours discovering the beautiful architecture Aarhus has to offer.
How it works: Download the app "GPSmyCity: Walks in 1K+ Cities" from iTunes App Store or Google Play to your mobile phone or tablet. The app turns your mobile device into a personal tour guide and its built-in GPS navigation functions guide you from one tour stop to next. The app works offline, so no data plan is needed when traveling abroad.

Toldboden, located at the port quay, served as a customs house for many years. Inaugurated in 1897, it was designed by famous Danish architect Hack Kampmann. Nowadays, this red brick structure with three towers houses Erhvervscentrum Aarhus and Studenterhus Aarhus.
Image by Nils Jepsen on Wikimedia under Creative Commons License.
2

The Aarhus Theater is the largest provincial theater in Denmark. Designed by Danish architect Hack Kampmann, construction began in 1898 and was completed in 1900. This Art Nouveau structure was built with an emphasis on natural materials, and its interior was designed by artists Hansen-Reistrup and Hans Tegner. In 2007, the Aarhus Theater received an audio make-over.
Image by Michael Edson on Flickr under Creative Commons License.
Sight description based on wikipedia
3

The Post and Telegraph Building, built in 1904, is another design by the well-known Danish architect Hack Kampmann. It was built of granite and tiles, his favorite construction materials. The entrance is decorated with an interesting composition, consisting of a lamp with a bird atop it above the door.
Image by Nico / Nils Jepsen on Wikimedia under Creative Commons License.
4

Aarhus City Hall was inaugurated 2 June 1941, and it was drawn by architects Arne Jacobsen and Erik Møller. As one of just a few Danish city halls it was marked for preservation in March 1994 because of its unique architecture.

On the first proposal the plans did not include a tower but due to massive public pressure it was later added to the drawings. The city hall has a total area of 19,380 m² and its tower is 60 m tall. The building is made of concrete plated with 6,000 m² of marble from Porsgrunn in Norway. In January 2006 the city hall was included in the Danish Culture Kanon under architecture. Today the building is used as a museum for feminist culture and history in Denmark.

Image by Nico-dk on Wikimedia under Creative Commons License.
Sight description based on wikipedia
5

The Danish National Business Archives, constructed in 1902 in a beautifully decorated Romanesque style, was designed by architect Hack Kampmann. Until 1963, it had housed the National Library of Aarhus.
Image by N.N Jepsen on Wikimedia under Creative Commons License.
6

The Scandinavian Congress Center, established in 2005, is a conference center. It contains a meeting hall, banquet room, hotel, shopping arcade and offices. Designed by Skovgaard Sørensens Tegnestue, it has a modern, eye-catching architectural style using a lot of glass.
Image by Mikkel Elbech on Flickr under Creative Commons License.
7

Aarhus Central Station, built in 1927, is the city’s main railroad station. It was designed by the State Rail Company's architect K.T. Seest. Serving as the main hub for rail traffic between Aarhus and the rest of Denmark, the station is used by an average of 6.3 million people per year, making it the busiest train station outside of Copenhagen. The station is connected to a shopping center with 93 stores. The station itself has a few shops and a grocery store.
Image by David Van Horn on Wikimedia under Creative Commons License.
Sight description based on wikipedia
8

This building, constructed in 1905, used to house the Jutland Business School, the predecessor to the Aarhus School of Business. Designed by Danish architect Hack Kampmann, its white rendered façade and thin granite stripes above and beneath the windows look magnificent.
Image by Goshawty on Wikimedia under Creative Commons License.

Aarhus churches provide a good insight into Denmark’s cultural and religious heritage. This tour reveals Danish churches of various architectural styles, all charming in their own way. The two major historical churches in Aarhus are Aarhus Cathedral and the Church of Our Lady. Don’t miss the opportunity to check out the magnificent churches Aarhus has to offer.