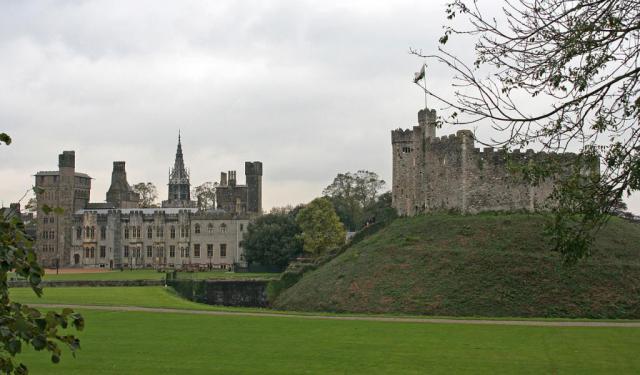 Image by Tony Hisgett on Wikimedia under Creative Commons License.

Old and new architecture beautifully combine together to create that unique and vibrant landscape of Cardiff. Take this self-guided walking tour to discover the city's most prominent landmark buildings such as the University building, City Hall, Millennium Stadium and many others.
How it works: Download the app "GPSmyCity: Walks in 1K+ Cities" from iTunes App Store or Google Play to your mobile phone or tablet. The app turns your mobile device into a personal tour guide and its built-in GPS navigation functions guide you from one tour stop to next. The app works offline, so no data plan is needed when traveling abroad.

Cardiff University is a research university located in the Cathays Park area of Cardiff. It received its Royal charter in 1883 and is a member of the Russell Group of Universities. The university is consistently recognised as providing high quality research-based university education in Wales. In the 2008 Research Assessment Exercise, almost 60 per cent of all research at Cardiff University was assessed as world-leading or internationally excellent – 4 and 3 the top two categories of assessment.

Image by Stan Zurek on Wikimedia under Creative Commons License.
Sight description based on wikipedia
2

City Hall is a civic building in Cathays Park, Cardiff. Built of Portland stone, it became the fifth building to serve as Cardiff's centre of local government when it opened in October 1906. The competition to design a town hall and adjacent law courts for Cardiff was won in 1897 by the firm of Lanchester, Stewart and Rickards. Construction was carried out by local builders, E. Turner and Sons. Cardiff received its city charter while construction was underway, in 1905. The building is an important early example of the Edwardian Baroque style.
Image by Yummifruitbat on Wikimedia under Creative Commons License.
Sight description based on wikipedia
3

Image by Million Moments on Wikimedia under Creative Commons License.
Sight description based on wikipedia
4

The stadium opened in June 1999, and the first major event to be held was an international rugby union match on 26 June 1999, when Wales beat South Africa in a friendly by 29–19, before a test crowd of 29,000. With total seating capacity of 74,500, it is the third largest stadium in the Six Nations Championship behind the Stade de France and Twickenham, which is the largest. It is also the second largest stadium in the world with a fully retractable roof and was the second stadium in Europe to have this feature.

Image by Nick Smith on Wikimedia under Creative Commons License.
Sight description based on wikipedia
5

The entrance to the building featured a corridor lined with ornamental wall tiles, designed to depict the four seasons and night and morning. These tiles were impressed with coloured clay to give the impression of a mosaic. The Old Library still exists, and is used as a museum and tourist information centre, and is the head office of the British Boxing Board of Control, the governing body of professional boxing in the United Kingdom.
Image by Bettia's puppet on Wikimedia under Creative Commons License.
Sight description based on wikipedia
6

Cardiff Central Library is the main library in the city centre of Cardiff. Four buildings have been named as such, with the newest building opening on 14 March 2009 and officially being opened a few months later on 18 June 2009 by the Manic Street Preachers. The first Cardiff library was opened in 1861 as the Cardiff Free Library, later expanded and known as the Cardiff Free Library, Museum and Schools for Science and Art.The present day Central Library building is located on The Hayes, cornered in between Mill Lane and Canal Street, opposite the St. David's 2 development. The library contains 55,000 ft (17,000 m) of space, 90,000 books, 10,000 of which are written in Welsh, and an additional 10,000 CDs and DVDs.
Image by Seth Whales on Wikimedia under Creative Commons License.
Sight description based on wikipedia
7

The church is first mentioned in the Taxatio Ecclesiasticus of Pope Nicholas IV in 1291 and was probably built in 1260. Since then it has undergone many repairs and alterations. Archaeologia Cambrensis in 1901 describes its 1848 state as a "a small church on an abrupt eminence, where was a Roman encampment." It was substantially rebuilt by the Reverend Victor Jones in 1960-61. In 1973 it was closed and deconsecrated and it has subsequently deteriorated into a ruin. Since 1999 a group of former and current parishioners, the Friends of St. Mary’s Church at Caerau, have been campaigning to preserve and commemorate the remains of the church. The church is open for visits and worship and other events.
Image by rog.davies on Flickr under Creative Commons License.
Sight description based on wikipedia
8

8) The Coal Exchange (must see)

The Coal Exchange is a live music venue in Cardiff, originally used a market floor for trading in coal. Situated in Cardiff Bay, near The Point, it is used extensively for live music and other events on the Cardiff music scene. It has a capacity of 1,000. Before the Coal Exchange was built in Mount Stuart Square, the area was a residential square with a central garden. It was taken over by commerce as the city grew in prosperity. Coal merchants used to chalk up the changing prices of coal on slates outside their offices or struck deals in the local public houses.

As Cardiff became the biggest coal port in the world, the building was constructed between 1883 and 1886 by Edwin Seward as a base from which to conduct trade negotiations regarding the coal mines of the South Wales Valleys - most of which was shipped to Cardiff for distribution. The building played an important role in the industrial Cardiff of the 19th century. Paired Corinthian columns, an oak balcony, and rich wood paneling adorn the trading hall, which was reconstructed by Edwin Seward in 1911.

During the peak trading hour of midday to one o'clock, the floor might have as many as 200 men gesticulating and shouting. It was estimated that up to 10,000 people would pass in and out of the building each day. At one time the price of the world's coal was determined here.
Image by Seth Whales on Wikimedia under Creative Commons License.
Sight description based on wikipedia
9

The Bute Dock Company was renamed the Cardiff Railway Company in 1897. The Pierhead became the administrative office for the Port of Cardiff in 1947. The 1897 clock mechanism, by William Potts & Sons of Leeds, was removed, being replaced with an electronic motor, and sold to an American collector in 1973. It was returned to Cardiff in 2005 and, in 2011, installed as a piece of contemporary art in Cardiff city centre.
Image by Nigel Homer on Wikimedia under Creative Commons License.
Sight description based on wikipedia
10

The Senedd, also known as the National Assembly building, houses the debating chamber and three committee rooms for the National Assembly for Wales in Cardiff. The 5,308 square metres Senedd building was opened by Queen Elizabeth II on 1 March 2006 and the total cost was £69.6 million. The Pritzker Prize-winning architect Richard Rogers won an international architectural design competition to design the building. It was designed to be sustainable with use of renewable technologies and be energy efficient.

The Senedd was constructed in two phases, the first in 2001 and the second from August 2003 until it was handed over to the National Assembly in February 2006. The building was nearly six times over budget and four years and 10 months late, compared to the original estimates of the project in 1997. Total costs rose due to unforeseen security measures after the September 11 attacks, and because the National Assembly did not have an independent cost appraisal of the project until December 2000, three years after the original estimate.
Image by Nigel's Europe on Flickr under Creative Commons License.
Sight description based on wikipedia