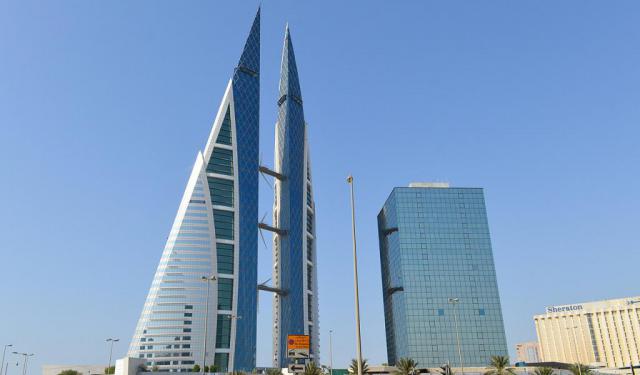 In Manama you can find numerous examples of modern architecture in addition to beautiful traditional structures. Zamil Tower is an excellent example of the blending of modernism and traditionalism. Take this tour to visit the architectural highlights of Manama, from its glittering skyscrapers to its Islamic mosques.
Image Courtesy of Wikimedia and Francisco Anzola.
How it works: Download the app "GPSmyCity: Walks in 1K+ Cities" from iTunes App Store or Google Play to your mobile phone or tablet. The app turns your mobile device into a personal tour guide and its built-in GPS navigation functions guide you from one tour stop to next. The app works offline, so no data plan is needed when traveling abroad.

The Old Palace of Manama is an important architectural masterpiece of the city. It is located on Old Palace Avenue next to other attractive landmarks and important buildings. The palace is a great example of traditional Islamic architecture and is where all foreign rulers and other important guests are met by Royal dignitaries.
Image Courtesy of Flickr and Harold Laudeus.
2

The Matam Ajam Al Kabeer Mosque is one of the most attractive religious buildings in Manama. It was first mentioned officially in 1881. The building is extraordinarily beautiful, with a brightly colored facade, traditional ornamentation and a grand dome. Many Iranian worshipers come here to pray. As Persians have arrived in Bahrain, they have brought with them the Baha'i Faith, which is practiced at this mosque.
Image Courtesy of Flickr and mormegil@cs.
3

Al Zamil Tower is a skyscraper in Fereej Al Fadhel located opposite the Bahrain Sheraton and just across from Government House. Built in 2005, the 21-storey tower covers 16,893 square metres of space and has parking facilities for 154 cars. It won the Aga Khan Award for Architecture in 2007.
Image Courtesy of Flickr and Harold Laudeus.
Sight description based on Wikipedia.
4

The two towers are linked via three skybridges, each holding a 225kW wind turbine, totalling to 675kW of wind power production. Each of these turbines measure 29 m (95 ft) in diameter, and is aligned north, which is the direction from which air from the Persian Gulf blows in. The sail-shaped buildings on either side are designed to funnel wind through the gap to provide accelerated wind passing through the turbines. This was confirmed by wind tunnel tests, which showed that the buildings create an S-shaped flow, ensuring that any wind coming within a 45° angle to either side of the central axis will create a wind stream that remains perpendicular to the turbines. This significantly increases their potential to generate electricity.

Image Courtesy of Wikimedia and B.alotaby.
Sight description based on Wikipedia.
5

The National Bank of Bahrain was founded in 1957 and today has a number of branches located throughout the country. It is the country's leading banking services provider. The bank's main offices are located in the center of Manama in a remarkable skyscraper that stands out in the city's skyline.
Image Courtesy of Flickr and Petr Kadlec.
6

Bahrain Financial Harbor (commonly abbreviated as BFH) is a large-scale commercial development project in Manama. The commercial complex is located next to King Faisal Highway, near many popular landmarks such as the Bahrain World Trade Center, Abraj Al Lulu, Pearl Roundabout and the National Bank of Bahrain. The majority of the project is being constructed on reclaimed land. The BFH project consists of multiple construction phases and when finished will include the Bahrain Performance Center, Commercial East, Commercial West, Diamond Tower, Dhow Harbor, Financial Center, Harbor Row, Residential North and Residential South. The two tallest twin towers (Commercial East and Commercial West) are currently listed as the tallest completed towers in Bahrain, with 54 floors and a height of 260 meters (853 feet).
Image Courtesy of Flickr and Harold Heindell Tejada.
Sight description based on Wikipedia.
7

The Abraj Al Lulu is a large residential project located in Manama. The entire project consists of three large towers, two of which have 50 floors and one of which has 40. The three towers (Gold Pearl, Silver Pearl and Black Pearl) are located next to King Faisal Highway, which is close to popular landmarks such as the Pearl Roundabout, NBB Tower, Bahrain WTC and the Bahrain Financial Harbor. The entire project covers a land area of over 23,230 square meters. Abraj Al Lulu was built by the Al Hamad Contracting Company. The complex, completed in March 2009, can accommodate over 1,100 cars in its four-story parking lot and consists of over 860 luxury 1 to 3 bedroom apartments.
Image Courtesy of Wikimedia and Wikijanina.
Sight description based on Wikipedia.