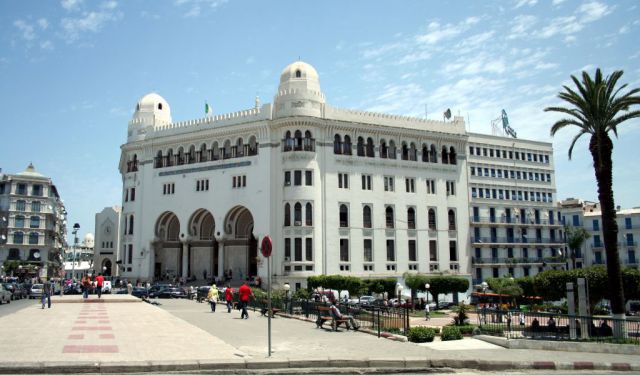 Image by Ludovic Courtès on Wikimedia under Creative Commons License.

Alger is a treasure trove of beautifully designed buildings. Structures with vastly different architectural styles sit side by side in harmony with their surroundings. Take this tour and explore Alger's history as reflected in its architecture.
How it works: Download the app "GPSmyCity: Walks in 1K+ Cities" from iTunes App Store or Google Play to your mobile phone or tablet. The app turns your mobile device into a personal tour guide and its built-in GPS navigation functions guide you from one tour stop to next. The app works offline, so no data plan is needed when traveling abroad.

The Superior National Music Institute, built in 1970, is housed in a contemporary building in the center of Alger. This symmetrically-designed structure was created to represent the modern side of the capital of Algeria. In front of the building is a large fountain that includes a sculpture of several mythical running horses.
Image by tindi on Flickr under Creative Commons License.
2

The National Theater of Alger, formerly the Opera of Alger, is located in Place Port Said. It was inaugurated on September 29th, 1853. The building was designed by F. Chassériau and the architect Ponsard. The original building was expanded in 1860 and again in 1871. In 1882, an enormous fire destroyed the building. During the restoration process, it was decided to make the building larger and to add some more ornate elements to the design. The number of seats increased to more than two thousand and the stage was enlarged. The theater hosted the Pan-African music festival in 1969 and was given a more modern look at that time.
Image by ahmed1948 on Flickr under Creative Commons License.
3

The Popular National Assembly is the name of the Lower House of Algeria's Parliament. The assembly is housed in a massive building facing the sea. It stands next to the Prefecture of Alger. The building is constructed of enormous bricks, and the result is a very solid, beautiful building that hosts one of the most important organizations in the country.
Image by Manu2573 on Flickr under Creative Commons License.
4

The Prefecture, also known as the Wilaya building, was built in 1904. The building's architecture is a blend of a multitude of styles. The dominant style is Neo-Moorish colonial. The walls of the Prefecture are snow white, which makes it highly visible. The facade of the building has a variety of splendid engravings and ornaments. The pillars give the Prefecture a very aristocratic look. Architect Henri Petit designed the building.
Image by g.saintfiacre on Flickr under Creative Commons License.
5

The Grand Post Office was built in the Neo-Moorish style, a style popularized by Charles Célestin Jonnart. Two talented architects Voinot and Tondoire designed this building for the French Postal Service - a powerful institution during the era of the French colonial empire. The main facade is adorned with three arceaux and the upper gallery with twinned columns. The main doors are made of high-quality wood, and the ceiling of the main room is an architectural jewel. The Grand Post Office is larger and more sophisticated than the other buildings in the area, which makes it one of the most visible and well-known constructions in Alger.
Image by Gruban on Flickr under Creative Commons License.
6

Hotel Albert Le 1er is a centrally located hotel near the Grand Post Office. The six-story building was constructed from 1929 to 1930. Each floor includes complicated architectural elements and sophisticated iron balconies. The dominant colors of the external walls are white and blue, which blend with the majority of buildings in the Casbah. What makes the hotel stand out from its surroundings are the golden painted objects adorning its exterior.
Image by BigBadi on Flickr under Creative Commons License.
7

The Central Faculty of Alger was inaugurated on December 20, 1879. The building was influenced by the French style of architecture. Both flights of stairs at the front of the building are made of expensive marble. They were designed by talented architects Louis Dolphin and Henry Petit. Exquisite labyrinths and amphitheaters, designed by Jean-Jacques Deluz, can be found from the building back toward the botanical garden. The building was restored in 1963 by architect Georgette Cottin.
Image by Malika Ouchene on Flickr under Creative Commons License.
8

The Civic House was built in 1935, designed by Léon Claro who won the architectural contest in 1927, announced by Alger's municipal authorities. The building represents a piece of Classic Architecture and bears features of the then emerging Socialist style. From the very beginning, it was planned as a concert hall, exhibition space and municipal library. The central part of the building is an exhibition hall. Upstairs, there is a ballroom, a theater, a conservatory and an art gallery. The interior of the Civic House was worked on by the School of Algiers' painters. Sculptors Paul Belmondo (father of the famous French actor) and George Beguet decorated the bas-relief of the main facade. Currently, this building hosts the headquarters of the UGTA (General Union of Algerian Workers).
Image by Gérard Beytout on Flickr under Creative Commons License.
9

Hotel El Djazair, known previously as Saint George, is a five-star hotel located in the heart of the city. This exquisite structure, built in 1910, is surrounded by a large exotic garden. The building's design is a combination of old Arab Ottoman and Hispano-Moorish architectural styles, which were very fashionable in the eighteenth century. Modern elements are present as well. The design elements found both inside and out represent Algerian traditions and style through their beauty and class. The hotel contains 296 rooms and has 7 senior and 19 junior suites. It is noted for its Algerian, French and Chinese cuisine.
Image by Amberinsea on Flickr under Creative Commons License.
Sight description based on wikipedia