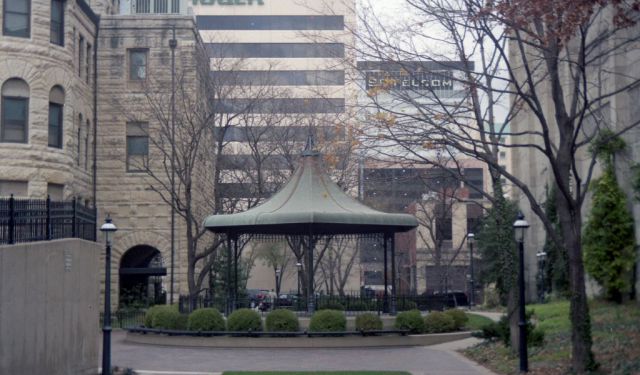 Image by Ty Nigh on Flickr under Creative Commons License.

Walking in downtown Wichita, you will observe various beautiful buildings that differ by their architectural style. There are unique buildings representing Victorian Renaissance, Art Deco, Second Renaissance Revival, Richardsonian Romanesque and other architectural styles. Take this tour to explore the beauty of the most important architectural buildings in Wichita.
How it works: Download the app "GPSmyCity: Walks in 1K+ Cities" from iTunes App Store or Google Play to your mobile phone or tablet. The app turns your mobile device into a personal tour guide and its built-in GPS navigation functions guide you from one tour stop to next. The app works offline, so no data plan is needed when traveling abroad.

The Old Sedgwick County Courthouse was established in 1888 by W. R. McPherson. Until 1959 it was used as the seat of county government. It is a Victorian Renaissance building characterized by many large windows, large halls and beautiful towers. The name of the county was given in honor of John Sedgwick who was the general of the Union Army. The structure is also a landmark because of its exterior beauty and historical value.
Image by Ichabod on Wikimedia under Creative Commons License.
2

The U.S. Courthouse in Wichita, originally the U.S. Post Office and Courthouse, is distinguished by its modern facade and Depression-era murals. The building is listed in the National Register of Historic Places as part of a group of Kansas Post Offices noted for their artwork.

Modernistic for its time, the U.S. Courthouse is a U-shaped, flat-roofed, steel-framed building clad in beige Bedford limestone. The building is 224 feet by 157 feet, and is three levels in height, with a fourth level across the south elevation, and a fifth level at the towers of the east and west corners.

Image by DominusVobiscum on Flickr under Creative Commons License.
Sight description based on wikipedia
3

The Lassen Hotel was completed in 1918 and was created by Richards, McCarty and Bullford. The structure consists of eleven floors and is made of red brick. The main features of the hotel that display Second Renaissance Revival architectural style are the blustered walls and the floor decorations made of terracotta arches. The windows of the last floor are enriched by stained glass. The Lassen Hotel is located next to the Kansas World Trade Center Inc.
Image by Judy Handley on Wikimedia under Creative Commons License.
4

The Orpheum Theatre opened on September 4, 1922, and was the first atmospheric theatre in the United States though whether or not it can be considered a true "atmospheric theatre" has been contested by some. The magnificent 42 ft (13 m) high by 40 ft (12 m) wide proscenium arch is the main feature of the auditorium.

The Orpheum Theatre has significant associations nationally and internationally with the development of a whole new concept and style of theatre architecture. During this period, more than 17,000 acts appeared with the playbill changing three times each week.

By the time it closed in 1974, it was an adult film venue and the structure had considerably deteriorated. As Orpheum Theater and Office Building, it was listed on the National Register of Historic Places in 1980.
Image by jvh33 on Flickr under Creative Commons License.
Sight description based on wikipedia
5

The Scottish Rite Temple is one of the most beautiful, unique and oldest buildings in Wichita. It was established between 1887 and 1888. It is a wonderful model of Richardsonian Romanesque architectural style. It is enriched by unique characteristics like archways, curved porch entrances and its considerable size. Until 1898 the building was used by the Young Men's Christian Association because it was bought by the Scottish Rite Masonic Organization, from which it got its name.It was listed on the National Register of Historic Places in 1972.
Image by Ty Nigh on Flickr under Creative Commons License.
Sight description based on wikipedia
6

The Kress Building is located opposite the Mortgage Bank of America on East Douglas Ave. It was established in 1929 and is a perfect example of Gothic architectural style. The structure consists of five floors and is decorated with quatrefoil stone on the spaces dividing the storeys. The windows on the top floor are decorated by stone arches, an important detail of the exterior design of the Kress Building.
Image by ercwttmn on Flickr under Creative Commons License.
7

The Brown Building is located opposite the Kansas Health Foundation on South Broadway Street in downtown Wichita. Construction began in 1926 and lasted nine months. It was designed by Schmidt, Boucher & Overend. They created a wonderful example of Classical Revival architectural style with unique decorations that can be observed on the first and the top floor on the exterior of the building. Today, the Brown Building is used as an office building.
Image by Judy Handley on Wikimedia under Creative Commons License.
8

The Ellis-Singleton Building is located next to Café Bel Ami on South Broadway Street. It is an outstanding model of Art Deco architectural style and is used as an office building. The building consists of eight floors and is mostly made of brick. The first floor is decorated by beautiful arches that cover the entrances, but the façade on the top floor is decorated by beautiful art deco motifs like sunflowers using terracotta, blocks and tile.
Image by DorkyMum on Flickr under Creative Commons License.
9

The Carey House is located next to Stewart's Jewelry on East Douglas Avenue. It was built between 1886 and 1887. It consists of five floors and is made of brick representing Second Empire architectural style. The main entrances are decorated by arches. The entire façade of the building is enriched by the contrast between the white and brown brick stone. Other unique features of the Carey House are the roof line and the tower.
Image by ercwttmn on Flickr under Creative Commons License.

Create Your Own Walk in Wichita

Creating your own self-guided walk in Wichita is easy and fun. Choose the city attractions that you want to see and a walk route map will be created just for you. You can even set your hotel as the start point of the walk.

In place since the days of Wild West, Wichita is the largest city in Kansas. Industrial hub as it is, the city also hosts a number of large museums, theaters, parks, and entertainment venues, including Exploration Place, featuring hands-on science exhibits, Botanica themed gardens, comprising a wildflower meadow and a Chinese garden, and The Museum of World Treasures, to mention but a few. To find...  view more