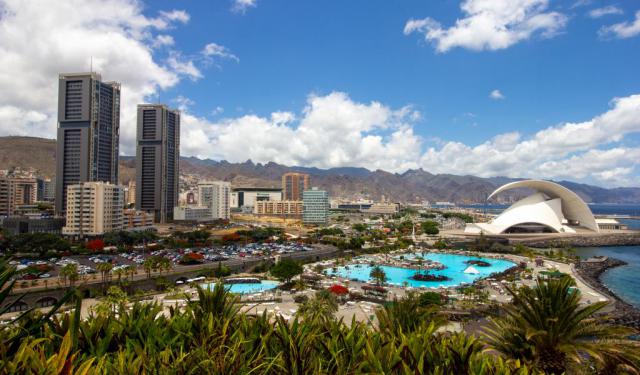 Image by Olaf A. Koch on Wikimedia under Creative Commons License.

The streets in the center of Santa Cruz accommodate the wonderful buildings constructed during the last four centuries. They present a variety of styles, architectural forms and colours. The southern extension of the city boasts contemporary futuristic architecture, the best examples of which are Centro Internacional de Ferias y Congresos and Auditorio of Tenerife. Take a stroll around the city with this self-guided tour to gain unforgettable cultural experience.
How it works: Download the app "GPSmyCity: Walks in 1K+ Cities" from iTunes App Store or Google Play to your mobile phone or tablet. The app turns your mobile device into a personal tour guide and its built-in GPS navigation functions guide you from one tour stop to next. The app works offline, so no data plan is needed when traveling abroad.

The Tenerife International Centre for Trade Fairs and Congresses, also known as "The Fair Recint" ("Recinto Ferial") was opened in May 1996. The building, covers an area exceeding 40,000 square meters in the sea front of Santa Cruz de Tenerife.

The complex was designed by architect and engineer Santiago Calatrava is configured as a multipurpose building that can host major fairs, exhibitions and conferences that take place on the island of Tenerife. After its opening in it have developed all kinds of events: trade shows (food, computers, agriculture, recreation, etc.), Music concerts, contests and gala carnival, congresses, seminars, art exhibitions, TV shows, fashion, and a multitude of activities.

Image by Koppchen on Wikimedia under Creative Commons License.
Sight description based on wikipedia
2

The Torres de Santa Cruz is a residential complex composed of the twin towers. They were designed by Canarian architect Julian Valladares, and were built in the period 2004-2006.

The towers reach 120 m high, without the antenna, becoming the highest skyscraper in the Canary Islands, and the tallest residential building in Spain until 2010 (currently occupy third place in the latter category). The Torres de Santa Cruz are also the tallest twin towers in Spain.

They are considered a symbol of the city, next to Auditorio de Tenerife. Precisely the auditorium next to these two towers. The Tower I was completed in 2004 and Tower II in 2006, although the refurbishment work on the site began in 2001.

Image by VolcánTeide on Wikimedia under Creative Commons License.
Sight description based on wikipedia
3

3) Auditorio of Tenerife (must see)

Construction began in 1997 and was completed in 2003. The auditorium was inaugurated on 26 September of that year with the presence of Felipe de Borbón, Prince of Asturias, and was later visited by former U.S. President Bill Clinton.

The majestic profile of the auditorium has become an architectural symbol of the city of Santa Cruz de Tenerife, the island of Tenerife and the Canary Islands. It is one of the major attractions of Tenerife and home to the Orquesta Sinfónica de Tenerife (Tenerife Symphony Orchestra).
Image by Thomas Wolf on Wikimedia under Creative Commons License.
Sight description based on wikipedia
4

The market building in Santa Cruz is located a few blocks from Plaza España at Plaza de Santa Cruz de la Sierra. The Mercado Nuestra Señora de Africa (Market of Our Lady of Africa) looks like a castle with the arched entrance, towers, the tall clock tower opposite the entrance and the courtyard. This is the main market of Santa Cruz built in 1942. Its architecture presents a fusion of styles called North African style. There is a central patio inside the building with stalls and a cover gallery around it. It comprises a large, traditional market, multiple shops and a commercial center housed in the annex.
Image by excitingextravaganza on Flickr under Creative Commons License.
5

Cabildo Insular de Tenerife (Presidency of the Canaries Autonomous Government) building is located on the Plaza de España; its other facade faces the port. This impressive building in Neoclassical style was designed by the prominent local architect Jose Enrique Marrero Regalado. Its construction lasted about 5 years and was completed in 1940. The structure featured the four corner towers; the tallest one is a clock tower, 164 feet in height. The main facade has an arched portico, embedded columns and decorative crown pediments. It houses the headquarters of the island government, as well as more administrative offices like the head office of Iberia, or of the Administrative Meeting of Public works. The building interiors contain a collection of artistic works that include original murals of Spanish artist José Aguiar.
Image by Tony-tux on Wikimedia under Creative Commons License.
6

This impressive building located in Plaza la Candelaria occupies the whole city block. The design of the Casino de Tenerife Building was developed by Miguel Martín Fernández de la Torre, the local architect who transformed the city. The building architecture invokes a rationalist style that was common in the 1930s. It was completed in 1935. The building is distinguished by its corner tower and its four dissimilar frontages using different combinations of the same structural elements. It houses the oldest of the Canary recreational societies established in 1840, and comprises a library, cafeteria, restaurant, casino and more facilities. The interiors are decorated with murals and art works of the famous local artists.
Image by Mataparda on Flickr under Creative Commons License.
7

This grandiose white-blue edifice is located at the intersection of José Murphy and Ruiz de Padrón streets, adjacent to Plaza del Príncipe. This amazing building planned by Mariano Estanga was completed at the beginning of the 20th century. Its architectural style is Second Empire style of the Canary Islands. The facade is decorated with multiple white sandstone sculptures and small intricate decorations, as well as flags. The images are works of Edouardo Tarquis and Teodmiro Robayna. Circulo de Amistad XII de Enero hosts cultural events like plays, films, exhibitions and so on.
Image by Michal Gorski on Wikimedia under Creative Commons License.
8

Caja General de Ahorros de Canarias represents the complex of three conjoint buildings of a geometrical plan that occupy the spacious area near Plaza del Príncipe, in the center of Santa Cruz. This is the headquarters of CajaCanarias, a Spanish savings bank established in 1984, the first financial institution in the Canary Islands. The structure was completed in 1998 and was designed by Jose Angel Dominguez Anadon, Franciso Artengo Rufino and Carlos Schwartz Perez, the authors of many Canarien modern buildings. The facades are finished with natural stone that was delivered from the Tindaya mountain in the Canary Islands. The buildings have characteristic facades with many windows exactly equal and placed in a linear fashion. There are two sculptures of Martin Chirino and Jose Pepe Abad next to Caja Canarias.
Image by Peejayem on Wikimedia under Creative Commons License.
9

This refined building was constructed at the turn of the 20th century for use by the Masonic lodge. Now it belongs to Town hall. The Temple is located halfway down San Lucas Street. The figures of two sphinxes guard the entrance. The facades feature Egyptian motifs symbolism, a massive triangular pediment, two etched columns near the entrance and an entrance door with carved geometric patterns. It is regarded as one of the major Masonic temples in the country.
Image by Innomime on Wikimedia under Creative Commons License.
10

The Town Hall of Santa Cruz de Tenerife is accommodated in the building that is named Palacio de los Dragos as there are a couple of perennial drago trees at the entrance. This palace, built at the beginning of the 20th century, is one of the four public administration establishments in the capital. This Neoclassic building has a three-arched portico crowned with the balcony and a classical pediment centered roof balustrade. This imposing hall is located on Calle Viera Y Clavijo, one block from the Plaza de Los Patos.
Image by Diego Delso on Wikimedia under Creative Commons License.

Santa Cruz de Tenerife, the capital city, features a variety and multiplicity of museums and art establishments. These reflect the history and heritage of Tenerife Island. Museum of Nature and Man, Museo Municipal de Bellas artes, Museo Militar Regional de Canarias and TEA are world renowned. Explore the popular tourist attractions in their own right with this self-guided walk.