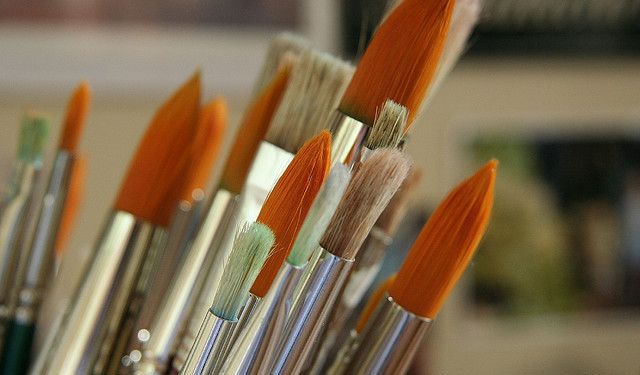 Image by john_a_ward on Flickr under Creative Commons License.

Buenos Aires is a fabulous cultural center, both for Argentina and for the whole of Latin America. Its galleries and cultural centers are not only spaces for art to be exhibited, but also for new and original art works to be created. In these centers you can meet old masters giving lessons to young talented artists, and participate at different workshops and courses offered in the arts such as tango, painting, acting and literary workshops among many others.
How it works: Download the app "GPSmyCity: Walks in 1K+ Cities" from iTunes App Store or Google Play to your mobile phone or tablet. The app turns your mobile device into a personal tour guide and its built-in GPS navigation functions guide you from one tour stop to next. The app works offline, so no data plan is needed when traveling abroad.

The building where the cultural centre is located was originally donated to the Franciscans in 1716. The blueprints of the construction were drawn by Jesuit architects Juan Krauss and Juan Wolf, while the design of the façade and interiors are attributed to Andrés Blanqui.

The building, finished in 1732, is one of the oldest in the city. With the arrival of the May Revolution and the declaration of independence during the first part of the 19th century, the building changed purposes. Manuel Belgrano founded a drawing school there, and since the 1870s it served as a shelter for the destitute. Torcuato de Alvear, first mayor of Buenos Aires, beautified Recoleta as well as the cultural centre; Juan Antonio Buschiazzo gave it an Italian style and created the chapel currently used as an auditorium.

Today, the Centro Cultural Recoleta holds sculptures and exhibitions, as well as concerts and artistic presentations and workshops of diverse types. In 2006 it held the wildly successful 'onedotzero' festival attracting over 20,000 people in 3 days for installations, live performances, screenings and music.

Why You Should Visit:
Dozens of exhibitions running at the same time, from modern to avant-garde (including a variety of areas for paintings, sculpture, drawings, photography, etc.), and mostly by Argentines – a nice change from other museums where the European-ish flavor dominates. Most of the time, two or three of the exhibitions are just amazing. For a free entrance place, it's all in all quite marvelous.

Tip:
Great place to go on the weekends, as there's always something interesting to do/try/see/experience. Events mostly happen during the evening-night time.


Image by edithbruck on Flickr under Creative Commons License.
2

The Praxis International Art Gallery was founded in 1977 by Miguel Kehayoglu. Its goal is to bring eminent works of contemporary Argentinean artists to the world's attention. It organizes large exhibitions around South America as well as in the United States. The artists the gallery promotes include famous painters as: Luis Mallo, Maritza Molina, Priscila de Carvalho, Martín La Rosa, José Luis Cuevas, Ana Fabry and many others.

Francisco Zurbaran is a famous Spanish painter who is renowned for his religious paintings and for his still-life works. He devoted himself mostly to painting pictures for churches and monasteries in Spain; later many were brought to South America. The Francisco Zurbaran Gallery, which is divided into two locations in Buenos Aires, is a must for anyone that enjoys pictorial art. Other galleries devoted to the painter are scattered across South America in Pilar, Cordoba, Uruguay and Mendoza.

The Borges Cultural Center is one of the many centers of art and culture in Buenos Aires. It is named after Argentina’s greatest literary figure, Jorges Luis Borges.

The Borges Cultural Center is located within the Galerias Pacifico, a historic landmark in Buenos Aires. The center hosts both art exhibitions and music and theater performances. Most of the exhibitions are temporary except for one permanent exhibition dedicated to the life, times and works of Jorges Luis Borges. The top floor has an exhibition space with an artistic window pane studded roof. These offer plenty of light during the day and are spectacular when lit up at night.

Besides changing art exhibitions and theater performances, there is always a tango performance taking place at the center. The Borges Cultural Center is also a teaching facility and there are workshops and courses for training the public in different art, dance and music forms. Visitors can take Tango lessons at the center. There are also lecture halls and a training school for ballet stars. The centre houses the Julio Bocca’s Ballet Argentino performance space. Art exhibitions of well known artists like Robert Cappa and Salvador Dali and up and coming contemporary Argentine artists are held here.

The Centro Cultural San Martin is located near Corrientes Avenue, the major highway of Buenos Aires. It features a host of different cultural events and artistic performances. The building itself, which is spread over 12 floors, was designed by Mario Roberto Álvarez and inaugurated in 1970. Here you can participate in various workshops and courses, including the Buenos Aires Audiovisual Nucleus which preserves over 7,000 audiovisual art-works, documents and scientific works supported by media.
Image by Loco085 on Wikimedia under Creative Commons License.
6

Affiliated with the University of Buenos Aires, the Centro Cultural Ricardo Rojas is both an excellent exhibitor of local arts and culture. It's also a lively place with a very friendly atmosphere. In its large theater you can enjoy exhibitions, live music and other stage performances, and films and videos. The center also offers a variety of cultural programs, projects and workshops, including tango and flamenco dance classes.
Image by lirena on Flickr under Creative Commons License.