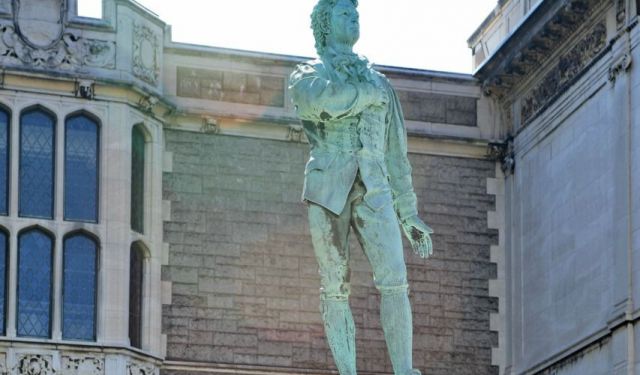 Image by cliff1066™ on Flickr under Creative Commons License.

Hartford’s museums are pleasantly surprising because of the local history and culture. The uniqueness of this tour is due to the original buildings and unusual exhibits that can be seen there and nowhere else. Take this tour to visit some of the most remarkable museums and art galleries in Hartford.
How it works: Download the app "GPSmyCity: Walks in 1K+ Cities" from iTunes App Store or Google Play to your mobile phone or tablet. The app turns your mobile device into a personal tour guide and its built-in GPS navigation functions guide you from one tour stop to next. The app works offline, so no data plan is needed when traveling abroad.

The Butler-McCook Homestead is a famous house museum and landmark in Hartford. It was established in 1782 and is also admired for its wonderful garden. Visitors can find different old things representing the city’s culture, such as paintings, furnishings, etc. All of them represent a fine collection of the past centuries. The façade of the house didn’t change too much from its original look, but the Victorian style garden was restored in 1875. The Butler-McCook Homestead can be visited on the 2nd Thursday of the month from 1 – 4 pm.
Image by JERRY DOUGHERTY on Flickr under Creative Commons License.
2

The Wadsworth Atheneum is the oldest public art museum in the United States. Its architects were Alexander Jackson Davis and Ithiel Town, who designed the "castle" that is the atheneum's oldest building. Construction began in 1842 after the museum was incorporated on June 1 of that year. While "1842" can be seen clearly above the building's name above the front doors, the museum itself did not open until July 31, 1844.

The Wadsworth family, being one of the oldest and most affluent in the city contributed numerous valuable pieces of art to the museum to be displayed at the time the Atheneum opened. The first collection consisted of 78 paintings, two marblebusts, one portrait miniature, and one bronze sculpture. The Wadsworth has also been utilized since its beginning as a place for dramatic and dance performances, exhibits of historical artifacts, social functions, and benefits. The structure itself consists of the original, castle-like building, plus 4 wings that have been added onto it since it was built.

The museum is home to approximately 50,000 objects, including ancient Roman, Greek, and Egyptian bronzes; paintings from the Renaissance, Baroque, and French and American Impressionist eras, among others; 18th-century French porcelains; Hudson River School landscapes; early American clothing and decorations; early African-American art and historical artifacts; and more. The collections span more than 5,000 years of world history.


Image by Daderot on Wikimedia under Creative Commons License.
Sight description based on wikipedia
3

The Center's goals are to promote the study of science by the state's youth and to encourage urban revitalization in Hartford. The state of Connecticut provided more than $100 million of support for the $165 million center, and the balance was donated by businesses, foundations and individuals. The Connecticut Science Center is the first science center to generate most of its needed power from an on-site fuel cell. This step was a major one for the Connecticut Science Center and its steps towards being a Gold Level (LEED) Certified green building.

The Isham-Terry House was established in 1854 for Ebenezer Roberts and later, in 1896, it was bought by Dr. Oliver K. Isham. He lived there in the company of his sisters, Charlotte and Julia. The structure is famous for its wide selection of features like the tower, the exterior balconies, the beautiful entrance that is decorated by an archway with columns and the stained glass in Victorian style. Visitors can also find old paintings, rare books and other significant objects.
Image by Lin Pernille ♥ Photography on Flickr under Creative Commons License.
5

Pump House Gallery was founded in 1947 and is the home of imaginative creations of local artists. The art gallery is located in Bushnell Park in the same area as Bushnell Café. Visitors can always admire local artists’ masterpieces and perhaps even buy some of them.You can also enjoy listening to live music on weekends and some weekdays.
Image by Mira Hartford on Flickr under Creative Commons License.
6

6) The Museum of Connecticut History (must see)

The Museum of Connecticut History is located in the same building as Connecticut’s State Library and Supreme Court Building. Here you will find different exhibits that represent the military and industrial history of Connecticut and much more. Visitors can admire permanent collections such as Portraits of Connecticut Governors, Coin Collections, Colt Firearms Collections, and so on. The Museum is open Monday thru Friday from 9.00 am to 4.00 pm and Saturdays between 9.00 am and 2.00 pm.
Image by GK tramrunner229 on Wikimedia under Creative Commons License.
7

The Mark Twain House and Museum was the home of Samuel Langhorne Clemens (a.k.a. Mark Twain) from 1874 to 1891 in Hartford. It functioned as a school, an apartment building, and a library. In 1962 the building was declared a National Historic Landmark. Since 1974 it has had a multi-million dollar renovation and an expansion dedicated to showcasing Mark Twain's life and work.

The house was built on 3.5 acres (1.4 ha) of land and designed with seven bedrooms, seven bathrooms, a carriage house, and plant-filled conservatory. Bay windows extend up to form turrets that were topped with porches, allowing Twain and guests a view of what was a very pastoral area of Hartford. The home is in the style of Victorian Gothic Revival architecture, including the typical steeply-pitched roof and an asymmetrical bay window layout. Legend says the home was designed to look like a riverboat.

The Connecticut Historical Society was established in 1825 and is one of the oldest historical societies in the nation. The Connecticut Historical Society is a non-profit museum, library, archive and education center. Its mission is to inspire and foster a lifelong interest in history through exhibitions, programs and Connecticut-related collections. The CHS houses a research center containing 270,000 artifacts and graphics and over 100,000 books and pamphlets. It has one of the largest costume and textile collections in New England.

Hartford is a place where visitors have to explore almost all the streets to see all the historic buildings of the city. Most of them are registered in the U.S. National Register of Historic Places. Take this self-guided tour to admire the most important historic houses in Hartford.