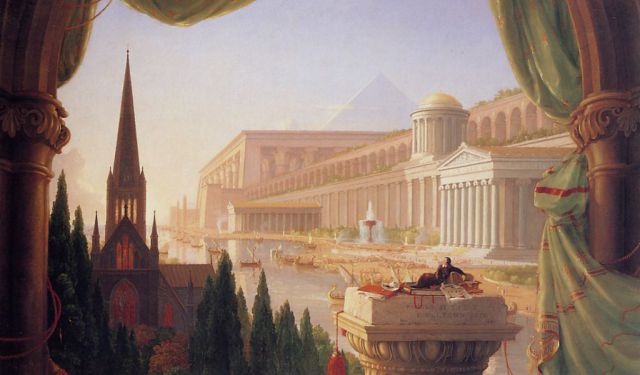 Toledo is a city with an impressive number of public art places, museums and local art galleries. Paintings, sculpture, glass art, ceramics and jewelry, wooden art items, graphics and much more. Every year the Arts Commission of Greater Toledo (ACGT) organizes an Art Walk through the galleries of the Arts Zone and Warehouse District in downtown Toledo. Get involved in this world of color splashes. Take the following walking tour - you won't regret it.
Image Courtesy of Wikimedia and Thomas Cole.
How it works: Download the app "GPSmyCity: Walks in 1K+ Cities" from iTunes App Store or Google Play to your mobile phone or tablet. The app turns your mobile device into a personal tour guide and its built-in GPS navigation functions guide you from one tour stop to next. The app works offline, so no data plan is needed when traveling abroad.

20 North Gallery is the oldest art gallery situated in the Warehouse District of Toledo. It was founded in 1993. Today the gallery is owned by Eric Hillenbrand and conducted by Peggy Grant, an artist herself and an art director. The gallery displays and sells both classical and modern artworks in a variety of media, representing local Toledo artists and others from all over the United States and Great Britain, Europe and Russia. Among these artists are: Adam Grant, Wil Clay and Frank Morrison. In November 2008, 20 North Gallery celebrated one hundred exhibits. Gallery hours: Wednesday – Saturday: Noon – 4p.m.
Image Courtesy of Flickr and Joel Washing.
2

Madhouse gallery is an art gallery situated in an area in uptown Toledo. The gallery presents interesting and innovative ideas in motion, graphics and animation. The artists who exhibit their works here have taken part in different shows all over the U.S.A. and Europe. The craftsmen and graphic designers work with modern and unusual materials such as fabric and plastic. The works exhibited here surpass the three well-known media – they are a mixture of joy and hip, light and shadow, urban and village artwork, much like humanity combines everything.
Image Courtesy of Flickr and richt-what.
3

3) Toledo Museum of Art (must see)

The Toledo Museum of Art is an internationally known art museum. The museum was founded by Toledo glassmaker Edward Drummond Libbey in 1901 and moved to its current location, a Greek revival building designed by Edward B. Green and Harry W. Wachter on January 17, 1912. The building was expanded twice in the 1920s and 1930s.

The museum contains major collections of glass art of the 19th and 20th century European and American art, as well as small but distinguished Renaissance, Greek and Roman, and Japanese collections. Notable individual works include Peter Paul Rubens's The Crowning of Saint Catherine, significant minor works by Rembrandt and El Greco, and modern works by Willem de Kooning, Henry Moore, and Sol LeWitt, as well as Fragonard's Blind man's bluff.

A concert hall within the east wing, the Peristyle, is built in a classical style to match the museum's exterior. The hall is the principal concert space for the Toledo Symphony Orchestra. A sculpture garden, containing primarily postwar works (earlier sculptures are on display in the interior) was added in 2001 and runs in a narrow band along the museum's Monroe Street facade.

The Toledo Museum features an extended exhibit, entitled The Egypt Experience: Secrets of the Tomb.

Why You Should Visit:
They have art for all tastes and beautiful displays. They have self-guided and guided tours. There are hidden niches in the classical wing. The outstanding Glass Pavilion is across the street in a different building. Kids area in the basement and lots of interactive displays for kids. Art classes and art appreciation classes available. Great speakers series as well as the movie series. There is a nice café for meals and drinks and a gift shop with unique artistic items. Staff is friendly and welcoming. All included, and free!

Tip:
Make sure you pop into the Peristyle auditorium. One of the coolest places to see any performance (you can see it from a doorway in the Egyptian wing).


Image Courtesy of Wikimedia and Wpktsfs.
Sight description based on Wikipedia.
4

Visiting the Libbey-chudy-Perkins house you might think that you got in one of your favorite old films. Two years of accurate and laborious work gave birth to the building that was named a National Historical Landmark of the USA. This 10,000 square foot home is a pure example of colonial revival style; all you feel upon entering it is endless enthusiasm and delight. This estate was built in 1885 and over 125 years, it has often changed owners, but one thing remains constant – the sigh of admiration from all who cross the threshold. The interior is carefully thought out and kept in perfect condition. The wood, glass, stucco moulding and other unique details are ingeniously combined in reserved glamour and generous dignity. Don’t miss your chance to witness this incredible beauty!
Image Courtesy of Flickr and jmv.
5

The Collingwood Arts Center or CAC is located in the Old West End district of Toledo just near Scott High School. It was opened in 2005. The main entrance is a two-storeyed building with glass doors. The center itself is a four-storeyed Victorian style brick building. The Collingwood Center is the only residential arts center in Ohio, where artists not only work and create but also live. There are over 400 artists who have been living and working here. It maintains several facilities: a gallery, a theatre and an arts educational center. The CAC welcomes everyone who is eager to fill his life with creativity and splashes of color.
Image Courtesy of Flickr and john_a_ward.

Create Your Own Walk in Toledo

Creating your own self-guided walk in Toledo is easy and fun. Choose the city attractions that you want to see and a walk route map will be created just for you. You can even set your hotel as the start point of the walk.

Toledo’s religious places will come alive differently for artists and architects, musicians, sculptors and casual visitors, but each of them will be fascinated by picturesque churches, charming chapels and gorgeous cathedrals. Take this tour and see for yourself.

If you want to visit the place which has kept alive the spirit of fine 19th century architecture, to witness a life of glamor and elegance, and to experience the style and wealth of the mighty of this world, then the Old West End neighborhood in Toledo is your final destination. Go ahead and explore the living demonstration of style, grace and beauty!