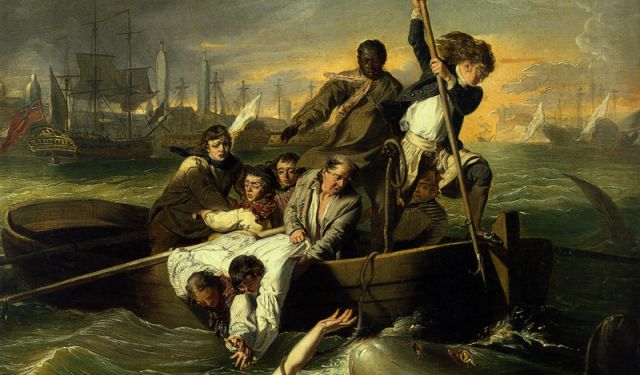 There are many art galleries in the city of Detroit. It is also home to the prestigious Institute of Art, so many talented artists live in the area. Here, you can see everything from modern art, traditional fine art and photography to prints, sculpture and other forms of visual art. This self-guided tour will lead you to Detroit's most noteworthy art galleries.
How it works: Download the app "GPSmyCity: Walks in 1K+ Cities" from iTunes App Store or Google Play to your mobile phone or tablet. The app turns your mobile device into a personal tour guide and its built-in GPS navigation functions guide you from one tour stop to next. The app works offline, so no data plan is needed when traveling abroad.

The Scarab Club is an artists' club, gallery, and studio in the Cultural Center Historic District of Detroit, located at 217 Farnsworth Street, near the Detroit Institute of Arts and the Detroit Science Center. It was designated a Michigan State Historic Site in 1974 and listed on the National Register of Historic Places in 1979.

The Scarab Club was formed in 1907. It began as an informal association named the Hopkin Club after the founder, marine painter Robert Hopkin. The members met regularly to talk art, eat dinner, and critique paintings.

Renamed the "Scarab Club" in 1913, the club grew in popularity, and member Lancelot Sukert, a Detroit architect, designed the current clubhouse, which opened its doors on October 5, 1928. The interior of the club is decorated with objets d'art created and contributed by members over the decades. The building showcases exquisite tile sculptures from Pewabic Pottery, including the Scarab Club logo. The ceiling beams of the lounge once served as the club's guest book, and poet Vachel Lindsay signed as one of the first visitors. Since then, signing the beam has become a ceremonial honor, and the autographs of art world luminaries such as John Sloan, Diego Rivera, Pablo Davis, Marcel Duchamp, Norman Rockwell, and John Sinclair grace the beams.


Image by j/k_lolz on Flickr under Creative Commons License.
Sight description based on wikipedia
2

2) Detroit Institute of Arts (must see)

The Detroit Institute of Arts (DIA) has one of the largest, most significant art collections in the United States. In 2003, the DIA ranked as the second largest municipally owned museum, with an art collection valued at more than one billion dollars. With over 100 galleries, it covers 658,000 square feet (61,130 m²); a major renovation and expansion project completed in 2007 added 58,000 square feet (5,388 m²). The museum building is highly regarded by architects. The original building, designed by Paul Philippe Cret, is flanked by north and south wings with the white marble as the main exterior material for the entire structure. It is part of the city's Cultural Center Historic District listed in the National Register of Historic Places.

The museum's first painting was donated in 1883 and its collection consists of over 65,000 works. The DIA is an encyclopedic museum: its collections span the globe from ancient Egyptian works to contemporary art. The DIA is located in Midtown Detroit's Cultural Center Historic District, about two miles (3 km) north of the downtown area, near Wayne State University. The Detroit Institute of Arts hosts major art exhibitions and also contains the 1,150-seat Detroit Film Theatre (designed by theatre architect C. Howard Crane).

The Detroit Artists Market, also called DAM, was established in 1932 and is one of the oldest galleries in the region. It promotes emerging and well-known local artists by exhibiting and selling their work. In the past it displayed pieces by only young artists but that has since changed. The market often holds temporary exhibitions of several artists' pieces on a certain theme or the work of one particular artist at a time. In addition to paintings, you can find jewelry, pottery, and more.

The Elaine L. Jacob Gallery is part of Wayne State University and is the best modern art gallery in the city. The gallery displays local, national and international modern art that will provoke and challenge you. Pieces include paintings, sculptures, photography and more.

Dell Pryor Gallery has been displaying the work of local Detroit artists for the past 15 years. The gallery has a wide assortment of pieces that includes many contemporary paintings, sculptures and photographs. It exhibits work by both emerging and internationally-known artists.