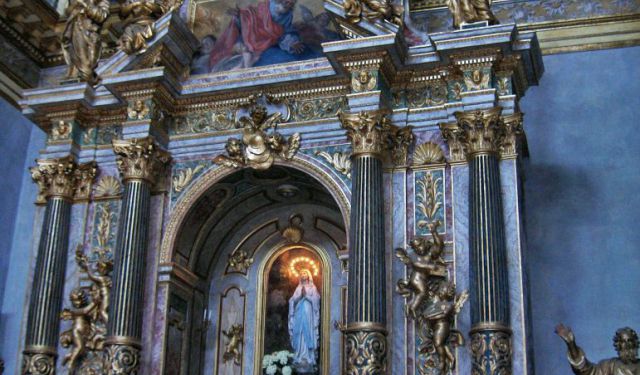 Assisi is a great sacred destination, being the birthplace of St. Francis, St. Clare (Chiara d'Offreducci) and Saint Gabriel of Our Lady of Sorrows. This wonderful city houses a number of striking religious buildings, which date back to the 17th century at the time of Augustus. Take the following tour to visit the most outstanding religious buildings in Assisi!
How it works: Download the app "GPSmyCity: Walks in 1K+ Cities" from iTunes App Store or Google Play to your mobile phone or tablet. The app turns your mobile device into a personal tour guide and its built-in GPS navigation functions guide you from one tour stop to next. The app works offline, so no data plan is needed when traveling abroad.

1) Basilica of St. Francis of Assisi (must see)

The Papal Basilica of St. Francis of Assisi is the mother church of the Roman Catholic Order of Friars Minor, commonly known as the Franciscan Order in Assisi, the birthplace of St. Francis. The burial place of St. Francis, the basilica, is one of the most important sites of Christian pilgrimage in Italy. The basilica, which was begun in 1228, is built into the side of a hill and comprises two churches known as the Upper Church and the Lower Church, and a crypt where the remains of the saint are interred. With its accompanying friary, the basilica is a distinctive landmark to those approaching Assisi. It is a UNESCO World Heritage Site since 2000. The interior of the Upper Church is important as an early example of the Gothic style in Italy. The Upper and Lower Churches are decorated with frescoes by numerous late Medieval painters from the Roman and Tuscan schools.
Image by Georges Jansoone on Wikimedia under Creative Commons License.
Sight description based on wikipedia
2

Monastery of San Pietro or St. Peter’s Abbey is situated on San Pietro Piazza. Originally built by the Benedictines in the tenth century, the church was restored in 1954 and presents beautiful Romanesque–Gothic style. This striking religious building houses six tombs and fine frescoes of the fourteenth-fifteenth centuries.
The Abbey undergrounds house a museum. Built on the Roman ruins, these older rooms are used for exhibitions. Of local importance is the Well of Martyrs where the bodies of San Vittorino and companions were thrown. The museum displays a collection of art that includes ceramic works of Italian and foreign artists on the theme "St. Francis and the Nativity in contemporary art".
Image by Gunnar Bach Pedersen on Wikimedia under Creative Commons License.
Sight description based on wikipedia
3

Chiesa di Santo Stefano is another historic religious building of Assisi. It represents a small and simple Romanesque church, built between the twelfth and thirteenth centuries. Stone walls, small windows, wood ceiling and fine frescoes remind of the long history of this old church.
Image by David Faulks under Creative Commons License.
4

The Chiesa Nuova is a church in Assisi, Italy, built in 1615 on the site of the presumed birth place of St. Francis, the house of Pietro di Bernardone. It was then called Chiesa Nuova because it was the last church to be built in Assisi at that time.

It was erected because, during a visit to Assisi in 1613, Antonio de Trejo, the Spanish Vicar General of the Franciscans, was saddened when he saw the original home of St. Francis becoming dilapidated. With the help of the Spanish Embassy in Rome and through a generous gift of 6,000 ducats by King Philip III of Spain, he was able to buy the house. Pope Paul V authenticated this purchase on 10 July 1615 and blessed the first stone.

This church, built in late Renaissance style, features a high dome divided in coffers, with lantern and a drum. Such a caisson ceiling is a feature of Renaissance architecture. It built in the form of a Greek cross, with nave and transepts of the same length, inspired by the Roman Church SantEligio degli Orefici. The church is decorated with frescoes by Cesare Sermei and Giacomo Giorgetti (17th century).

The high altar was set over the room of St. Francis. One can also visit the shop where Francis sold his cloth and the stairwell in which Francis was imprisoned by his father. This is the place where Francis decided to answer the divine call and to renunciate worldly goods.

Image by Gunnar Bach Pedersen on Wikimedia under Creative Commons License.
Sight description based on wikipedia
6

The Church of Santa Maria Maggiore is situated between Piazza del Vescovado and Porta Moiano. The church was originally founded in the 10th century, while the present building dates back to the 12th century. Beautiful frescoes from the 14th and 15th centuries and a late Medieval, 9th century sarcophagus are still preserved here.
Image by David Faulks under Creative Commons License.
7

7) Basilica of St. Clare of Assisi (must see)

The Basilica of St. Clare of Assisi (Santa Chiara Basilica) was established between 1257 and 1265 and represents fine Italian Gothic style. Its exterior features pink and white stones, as well as massive supporting arches. Inside the church you will find precious frescoes, dating back to the XIIth to XIVth centuries.
Image by Georges Jansoone on Wikimedia under Creative Commons License.
8

In 1228, while he was in Assisi for the canonization of Saint Francis, Pope Gregory IX consecrated the high altar. Pope Innocent IV inaugurated the finished church in 1253.
Image by Georges Jansoone on Wikimedia under Creative Commons License.
Sight description based on wikipedia