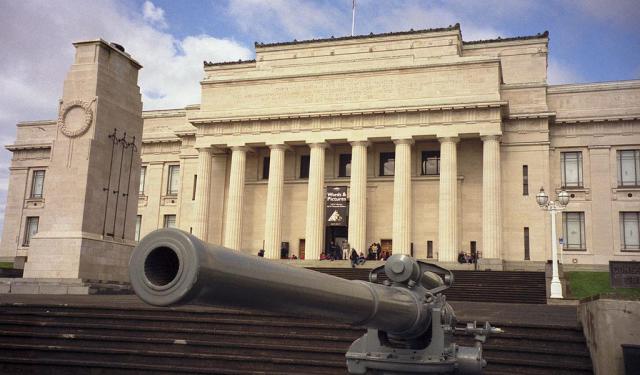 Image by Greg O'Beirne on Wikimedia under Creative Commons License.

Auckland houses a vast range of cultural venues such as museums and galleries. The New Zealand National Maritime Museum will show you local maritime activity and its history, whereas, at Ewelme Cottage you will find original kitchen equipment and household items, dating back to the 19th century. The Auckland War Memorial Museum will help you to discover the military and natural history of New Zealand. Various art galleries will surprise you with their outstanding collections of modern art.
How it works: Download the app "GPSmyCity: Walks in 1K+ Cities" from iTunes App Store or Google Play to your mobile phone or tablet. The app turns your mobile device into a personal tour guide and its built-in GPS navigation functions guide you from one tour stop to next. The app works offline, so no data plan is needed when traveling abroad.

The New Zealand Maritime Museum in Auckland is the largest of its kind in the country. The seas surrounding the archipelago have always held an important place in the hearts and minds of New Zealanders from the times of the earliest settlers. Located on Hobson Wharf, the museum charts the nation’s seafaring history from early Polynesian explorers to modern maritime moments such as involvement in the America’s Cup. There is a wide range of permanent and temporary exhibitions that are open to the public as well as theatrical performances of the Polynesian settlement of the New Zealand archipelago.

In addition to a number of reconstructed or preserved ships in the building itself, the museum also owns a number of vessels that are normally berthed outside of the museum, including the 19th-century steam engine Puke and a floating steam crane from the early 20th century called Rapaki that can be entered and explored during normal museum visits.

Why You Should Visit:
To (once again) convince yourself that yes, New Zealanders do know a lot about the sea.

Tip:
Try to visit around noon so you can catch the firing of the cannon!
The free guided tours will certainly add color to your visit, too.


Image by Ingolfson on Wikimedia under Creative Commons License.
2

Gus Fisher Gallery is located in the Kenneth Myers Centre that has various heritage features such as a fine glass dome, beautifully detailed cornice and wooden doors. It houses exhibitions of modern art as also the art of previous centuries and focuses on New Zealand and the extensive Pacific area.
Hours: Tuesday-Friday 10:00 am – 5:00 pm; Saturday 12:00 – 4:00 pm
Image by Richard Brydges Beechey on Wikimedia under Creative Commons License.
3

The Auckland Domain is Auckland's oldest park, and at 75 hectares one of the largest in the city. Located in the central suburb of Grafton, the park contains all of the explosion crater and most of the surrounding tuff ring of the Pukekawa volcano.

The park is home to one of Auckland's main tourist attractions, the Auckland War Memorial Museum, which sits prominently on the crater rim (tuff ring). Several sports fields occupy the floor of the crater, circling to the south of the cone, while the rim opposite the Museum hosts the cricket pavilion and Auckland City Hospital. The Domain Wintergardens, with two beautiful glass houses, lie on the north side of the central scoria cone. The fernery has been constructed in an old quarry in part of the cone. The duck ponds lie in the northern sector of the explosion crater, which is breached to the north with a small overflow stream.

Some of the largest annual events are "Christmas in the Park", which in the past has drawn more than 200,000 spectators, and other popular recurring events including the "Symphony under the Stars", the "Lantern Festival", and the "Teddybears Picnic".

Why You Should Visit:
Great place to picnic, walk around, watch cricket, sit in the shade, listen to music in the park or visit the Auckland Museum and the Wintergardens.

Tip:
If you like walking, make a whole day of it by starting in Mount Eden, then going to Newmarket and the Auckland Domain.
During the summer there are loads of events that take place here, so always worth checking if there's anything happening.

Auckland Museum is one of New Zealand's most important museums and war memorials. Its collections concentrate on New Zealand history (and especially the history of the Auckland Region), natural history, and military history.

The museum is also one of the most iconic Auckland buildings, constructed in the neo-classicist style, and sitting on a grassed plinth (the remains of a dormant volcano) in the Auckland Domain. The copper and glass dome, as well as the viewing platform–event centre underneath it, quickly won the admiration of critics and public, being noted for 'its undulating lines, which echo the volcanic landscape and hills around Auckland'. Standing in the event centre underneath the top of the dome was likened to being underneath the 'cream-coloured belly of a giant stingray', 'with its rippling wings hovering over the distinctive city skyline'. In June 2007, the 'Grand Atrium' project also received the Supreme Award of the New Zealand Property Council, which noted it as being "world-class", and a successful exercise in combining complex design and heritage demands.

The natural history section of the museum is an innovative and vibrant place to visit with a fascinating calendar of events throughout the year. The museum stores a photographic collection of 1.2 million images, and stores and exhibits 1.5 million natural history specimens from the fields of botany, entomology, geology, land vertebrates and marine biology.

There is also an extensive permanent exhibition covering wars, including wars within New Zealand and New Zealand's participation in overseas conflicts. This exhibition is linked to the War Memorial (see below), and shows, for example, models of Maori pā (fortified settlements) and original Spitfire and Mitsubishi Zero airplanes. The Museum holds the largest collection of applied and decorative arts in New Zealand and selections are currently displayed in the Landmarks and Encounters Galleries.

Why You Should Visit:
Great place to sample the history of NZ through the ages. The vista of the port and city skyline from the front door is also one to savor especially during sunset.

Tip:
Do try to time your visit to get tickets for the 30-40min Maori Cultural Performance (daily, 11am, 12pm, and 1:30pm (2:30pm avail Nov-Mar)). Pick up the 'What's On' brochure and select the galleries and themed special exhibitions of most interest. Be sure to also pick up a map at the entrance as the layout is rather confusing.

One of the highlights of the family’s possessions is the antique book collection with more than 2000 tomes. The cottage offers a snapshot into life in New Zealand during the first days of the colony – you will see much of the home preserved as it was in the 19th century and many cooking, craft and even beauty items and pharmaceuticals. Rooms of the home were used during the filming of the Oscar winning film The Piano. Ewelme Cottage is open from Friday to Sunday, 10am to 4:30pm.
Image by William Hoiles on Wikimedia under Creative Commons License.