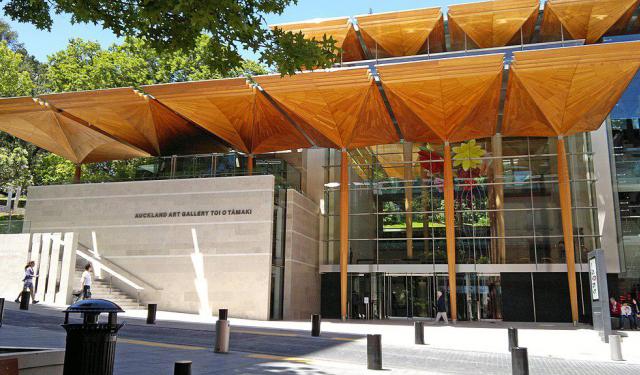 Image by ChewyPineapple on Wikimedia under Creative Commons License.

Auckland offers a vast range of art galleries which houses an outstanding collection of paintings and holds frequent exhibitions. Works of famous local and international artists are presented here. Fans of modern art will be especially pleased. Take the following tour to see the best Auckland art galleries!
How it works: Download the app "GPSmyCity: Walks in 1K+ Cities" from iTunes App Store or Google Play to your mobile phone or tablet. The app turns your mobile device into a personal tour guide and its built-in GPS navigation functions guide you from one tour stop to next. The app works offline, so no data plan is needed when traveling abroad.

At Antoinette Godkin Gallery you will find the latest contemporary art. This fine art gallery, situated in central Auckland, displays works of new and talented artists in New Zealand and holds exhibitions of contemporary fine art.
Hours: Tuesday-Friday: 11:00 am – 5:00 pm; Saturday: 11:00 am - 3:00 am.
Image by Winstonwolfe on Wikimedia under Creative Commons License.
2

Founded in 1987, Gow Langsford Gallery’s goal is to showcase contemporary New Zealand art. It exhibits work by contemporary artists from New Zealand, as well as from all over the world. Besides modern paintings, the gallery offers an interesting collection of sculptures.
Hours: Monday - Friday: 10-6pm, Saturday: 10-4pm, Closed Sundays and Public holidays.
Image by MUNDARA KOORANG on Wikimedia under Creative Commons License.
3

The principal public gallery in Auckland, Toi o Tāmaki has the most extensive collection of national and international art in New Zealand and frequently hosts traveling international exhibitions. In 2009, it was announced that American investor Julian Robertson would donate art valued at $115 million to the Gallery. The donation included works by Paul Cezanne, Paul Gauguin, Pablo Picasso, Henri Matisse, Piet Mondrian, Salvador Dali, Georges Braque, Andre Derain, Fernand Leger, Pierre Bonnard and Henri Fantin-Latour and was the largest of its kind in Australasia. This gallery is housed in an eclectic building, with architecture both modern and traditional housing the pieces.

Tip:
Take the cost-inclusive guided tour – you won't be sorry you did. Afterward, stick around and wander the galleries you missed during the tour.


Image by Amyaag on Wikimedia under Creative Commons License.
4

Artspace is a leader of the modern art movement in New Zealand, dedicated to the fulfillment of new ideas in art and culture. This gallery is the largest contemporary art space to present modern New Zealand and international art. Artspace’s goal is to develop new ideas and encourage innovation in art.
Hours: Tuesday-Friday: 10:00 am – 6:00 pm; Saturday: 11:00 am – 4:00 pm.
Image by nrkn on Flickr under Creative Commons License.
5

Masterworks Gallery specializes in New Zealand and Australian modern applied art and focuses on glass, ceramics and jewelry. This contemporary applied art gallery promotes the richness and diversity of the applied arts and holds fifteen exhibitions a year.
Hours: Tue - Fri: 10am - 5pm; Sat: 10am - 4pm.
Image by Mickael Casol on Flickr under Creative Commons License.