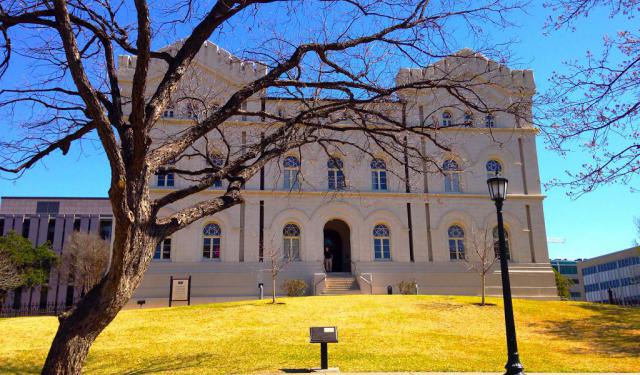 Image by ilovemypit on Flickr under Creative Commons License.

Austin has a wide range of museums dedicated to art, music, literature and history. The beautiful Victorian Bremond District preserves some of the city’s most stunning architecture. This tour will introduce some of Austin’s most prominent museums.
How it works: Download the app "GPSmyCity: Walks in 1K+ Cities" from iTunes App Store or Google Play to your mobile phone or tablet. The app turns your mobile device into a personal tour guide and its built-in GPS navigation functions guide you from one tour stop to next. The app works offline, so no data plan is needed when traveling abroad.

Since Austin is the capital of music festivals, the Texas Museum of Music, established in 1984, is dedicated to the most noted contemporary musical contributions. The museum displays a huge collection, including rare cassettes, LPs and CDs, photos, various original recordings and memorabilia, preserving America’s musical heritage.

Image by Simone Duboc on Flickr under Creative Commons License.
2

This little Victorian cottage was the house of famous American writer William Sydney Porter, known as O. Henry, from 1893 to 1895. The house was built in 1886, located at 308 East 4th Street. When the neighborhood became a warehouse district, to avoid its demolition, the cottage was relocated to its present address. It preserves some of O. Henry's belongings, such as books and manuscripts. It also contains the original period furniture and photographs of O. Henry's life in Austin. The house became his museum in 1934.

The Bremond Block Historic District is a collection of eleven historic homes in downtown Austin, constructed from the 1850s to 1910.

The block was added to National Register of Historic Places in 1970, and is considered one of the few remaining upper-class Victorian neighborhoods of the middle to late nineteenth century in Texas. Six of these houses were built or expanded for members of the families of brothers Eugene and John Bremond, who were prominent in late-nineteenth-century Austin social, merchandising, and banking circles. They are located within the square block bordered by West Seventh, West Eighth, Guadalupe, and San Antonio streets. The district also includes several houses on the west side of San Antonio and the south side of West Seventh, at least three of which were built or altered by the North family.

Image by Mister-E on Flickr under Creative Commons License.
Sight description based on wikipedia
4

The Austin History Center is located in a beautiful 1933 limestone building, designed in the Italian Renaissance style by architect and founding dean of the University of Texas School of Architecture, Hugo Kuehne. The building is considered the most successful of Kuehne's work. Originally, this building served as a public library, but in 1979 it became the city’s historical archive. It also serves as a research center.

5) The Capitol Visitors Center (must see)

The Capitol Visitors Center is located in the southeast corner of the State Capitol grounds. Built in 1856, it is the oldest office building in Austin, serving as the General Land Office until 1918. In 1994, the building became the visitor center, providing information about Texas history and the everyday activities of the capitol.
Image by rutlo on Flickr under Creative Commons License.