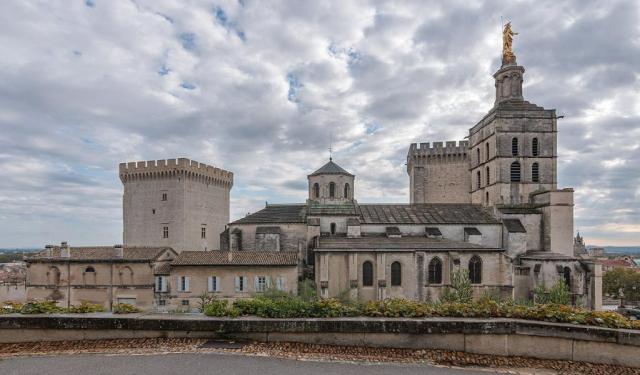 Image by Martin Kraft on Wikimedia under Creative Commons License.

A truly sacred destination in France, Avignon has been known as the French Vatican due to the Papal residence here since 1309. Palais des Papes and cathedral are the most popular attractions here. The Gothic and Neoclassical architecture of the churches will impress anyone immediately. Their rich interior and old icons will make your visit unforgettable. Don't miss the chance to see the best churches while staying in Avignon.
How it works: Download the app "GPSmyCity: Walks in 1K+ Cities" from iTunes App Store or Google Play to your mobile phone or tablet. The app turns your mobile device into a personal tour guide and its built-in GPS navigation functions guide you from one tour stop to next. The app works offline, so no data plan is needed when traveling abroad.

Saint Symphorien Church, located at Place des Carmes, is the former site of Avignon's Carmelite Convent, used as such until 1791. The church was built in 1267. Reconstruction was initiated by John XXII in 1320, but the work was still in progress under Clement VI, who had extended funding. Inaugurated on April 10, 1520, after the collapse of the south wall in 1672, the building was redesigned. During the Revolution, St. Symphorien served as a place of public meetings, and later, the headquarters of the Jacobin Club of Avignon. The architecture is simple but its interior is impressive, especially the white marble altar from 1856, its great organ and four paintings by William Strike from 1602.
Image by Véronique PAGNIER on Wikimedia under Creative Commons License.
2

One of the most important churches of this Papal city, Chapelle des Pénitents Noirs is a marvel of Baroque architecture. It is decorated with a stone façade designed by Thomas Lainée, a Parisian architect based in Avignon in 1714 and a member of the Brotherhood. Composite pilasters, topped with black marble divide the space into panels decorated with pink marble. Also remarkable are the polychrome marble altars on both sides of the chapel door. At the transom, you can see the symbol of the Brotherhood. In 1739, under the leadership of François Manne, president of the Brotherhood, the building acquired its present appearance.
Image by Paul Munhoven on Wikimedia under Creative Commons License.
3

Avignon Cathedral (Cathédrale Notre-Dame des Doms d'Avignon) is a Roman Catholic cathedral, and a French national monument. It is the seat of the Archbishop of Avignon. A Romanesque building, mainly of the 12th century, its most prominent feature is the gilded statue of the Virgin Mary on the western tower. Among the many works of art inside, perhaps the most beautiful is the mausoleum of Pope John XXII, a masterpiece of the 14th century Gothic carving.
Image by Tael on Wikimedia under Creative Commons License.
Sight description based on wikipedia
4


Image by Hans Peter Schaefer on Wikimedia under Creative Commons License.
Sight description based on wikipedia
5

After Notre Dame des Doms, the Church of St. Agricola is the oldest church in Avignon. Bishop St. Agricola was officially proclaimed the patron saint of the city as the protector of agricultural crops. The abbey of Saint Agricola appears in texts from the late 11th century. This three-story church, bearing his name, was erected in 1321. The original church was rebuilt in the second half of the 15th century and in 1746 the fourth floor was added.
Image by jean-louis zimmermann on Flickr under Creative Commons License.
6

Saint Pierre Church, one of the churches most adored by the locals, is located in the square that bears its name. Beautifully restored in 1385 with the help of a donation by Cardinal Pierre de Près, it was built in characteristic Avignon Gothic style. It has an impressive facade decorated with elegant ornaments. In 1551, the four meter high walnut doors were added and remain one of its most beloved elements. Also noteworthy are the 15th century white limestone throne, the altarpiece depicting the Last Supper, the icons and of course the paintings, one of them being Adoration of the Shepherds by Simon de Chalons.
Image by TracyElaine on Flickr under Creative Commons License.
7

This 19th century synagogue, located in the center of the city, was built on the site of a synagogue from 1221 which had been destroyed by fire during the French Revolution. What had survived was rebuilt by architect J.A. Jeoffroy in 1845. Also known as Consistoire Israélite de Vaucluse, it is a round neoclassical building with a cupola. Its interior is decorated with white colonnades and walnut furniture.
Image by RuTemple on Flickr under Creative Commons License.
8

The collegiate church of Saint-Didier is a Gothic church built in the mid-14th century. The first text to mention it, however, dates back to 1008, when a donation was made by the Bishop of Avignon Rostaing Abbey Montmajour. It was Cardinal Bertrand de Deaux who willed this church be built on his estate after he died. Inaugurated on September 20, 1359, Eglise Saint Didier is considered the most characteristic of Gothic Avignon architecture. Two pictures by Simon de Chalons entitled The Flagellation and The Descent of the Holy Spirit are preserved here. Also remarkable is the cross commissioned in 1478 by King Rene to Francesco Laurana that adorns the altar. This bas-relief is regarded as one of the earliest existing Renaissance works in France.
Image by j.labrado on Flickr under Creative Commons License.
9

Pénitents Gris d'Avignon Chapel belongs to the Penitent order, which had a large presence in France. It is an archetype of Penitent architecture and their symbol. As with most of their chapels, it is very simple, but its interior is well worth seeing. It preserves a unique and rare collection of religious artifacts. Built on the site of Sainte-Croix Oratory, where Louis VIII prayed, since the French Revolution it is the city's only remaining Penitent church.
Image by Shoshanah on Flickr under Creative Commons License.