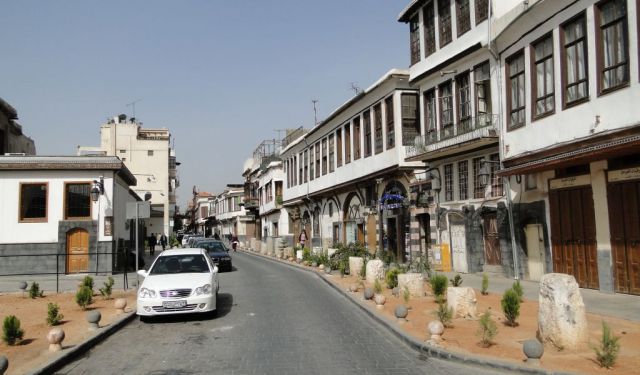 Bab Sharqi Street, or Street Called Straight, is one of the main roads in Old Damascus and home to several interesting attractions. Here you will find the historic Eastern Gate, the magnificent Roman Arch, amazing local shops and various churches. Don’t miss the opportunity to check out the great attractions listed in this tour.
How it works: Download the app "GPSmyCity: Walks in 1K+ Cities" from iTunes App Store or Google Play to your mobile phone or tablet. The app turns your mobile device into a personal tour guide and its built-in GPS navigation functions guide you from one tour stop to next. The app works offline, so no data plan is needed when traveling abroad.

Bab ash-Sharqi, or the Eastern Gate, is located on the east end of Old Damascus, beside the Orthodox Armenian Church. This fabulous historic construction is the only remaining city gate dating back to the Roman era and is a valuable Syrian landmark.
Image by Heretiq on Wikimedia under Creative Commons License.
2

The Syriac Catholic Church is a Christian church in the Levant having practices and rites in common with the Syriac Orthodox Church. They are one of the Eastern Catholic Churches following the Antiochene rite, the Syriac tradition of Antioch, along with the Maronites and Syro-Malankara Christians. This is distinct from the Greek Byzantine rite of Antioch of the Melkites, both Orthodox and Catholic. They have a separate church organization from the Melkites, Maronites, and Chaldean Catholics, which are other communities of the Levant also in full communion with Rome. The Patriarch of Antioch of this church has the title of Patriarch of Antioch and all the East of the Syrians and resides in Beirut, Lebanon.

On 31 October 2010, 58 Iraqi Syriac Catholics were killed by Muslim extremists while attending Sunday Mass, 78 others were wounded. The attack by Muslim terrorists on the congregation of Our Lady of Deliverance Syriac Catholic Church was the bloodiest single attack on an Iraqi Christian church in recent history.

Image by Boudreaux and Andrea on Flickr under Creative Commons License.
Sight description based on wikipedia
3

St. Mary’s Cathedral is one of the oldest Greek Orthodox churches in Damascus and is the seat of the Greek Orthodox Church of Antioch. The church was built in the 2nd century. After the Muslim conquest of Damascus, it was closed until 706 when Al-Walid ordered it returned to the Christians as compensation for the Church of John the Baptist which he had turned into the Umayyad Mosque.
Image by Hani Simo on Flickr under Creative Commons License.
Sight description based on wikipedia
4

The Roman Arch is a precious landmark and prominent tourist attraction in Old Damascus. Located where the Christian quarter begins, it features magnificent columns and is all that remains of what was perhaps a grand triple arch.
Image by krebsmaus07 on Flickr under Creative Commons License.