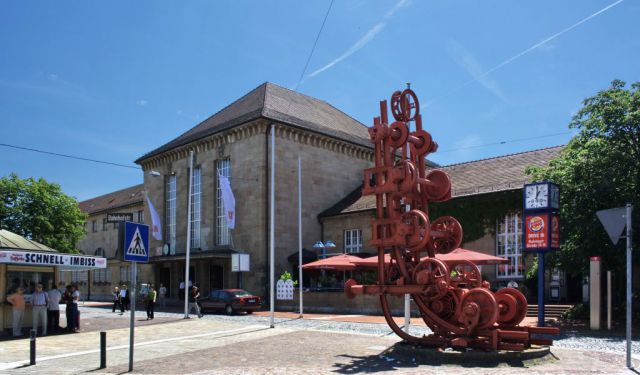 Image by Stefan-Xp on Wikimedia under Creative Commons License.

With plenty of entertainment to offer, Bad Cannstatt is the largest district in Stuttgart city. The area contains the famous Mercedes-Benz museum and arena, beautiful churches, a tram exhibition and many other fascinating places. Take this walking tour to discover Stuttgart’s most impressive region.
How it works: Download the app "GPSmyCity: Walks in 1K+ Cities" from iTunes App Store or Google Play to your mobile phone or tablet. The app turns your mobile device into a personal tour guide and its built-in GPS navigation functions guide you from one tour stop to next. The app works offline, so no data plan is needed when traveling abroad.

One of first churches in Stuttgart to be built of brick, Martin Luther Church was erected at the end of 19th century. It was designed by architects Richard Boklen and Carl Feil to resemble the elegant style of French cathedrals. The church’s clock-tower is decorated with beautiful windows, balconies and small corner towers. Today the church is the home of the Luther community of the Bad Cannstatt and a prominent landmark of the district.
Image by Bear62 on Wikimedia under Creative Commons License.
2

Gottlieb Daimler Museum and Memorial are located in the green area of Kurpark. German inventors' first models of vehicles that look more like bicycles and mechanized chariots are available here for public viewing. The workshop museum exhibits engines, tools, the model of the first horseless carriage designed by Maybach and other vehicles that will later become elegant Mercedes cars.

Image by Enslin on Wikimedia under Creative Commons License.
3

The spacious and cozy Neckarbiergarten is a lovely terrace set on the bank of the river Neckar. The tree line provides this magical place with much needed shade during hot summer months and protects the garden from the winds. Come here for relaxation, topped up with delicious Swabian cuisine food, famous local beer and stunning river views.
Image by kalleboo on Flickr under Creative Commons License.
4

This beautiful Evang Stadtkirche was built in 1506 by architect Jorg Aberlin Elder. It stands on the foundation of the 9th century stone church. The church is a fine example of late Gothic architectural style. The Renaissance style tower was built by Heinrich Schickhardt and added to the main structure in 1613. Step inside to discover eye-catching paintings of Rudolf Yelin and other 16th century religious artifacts.
Image by Bear62 on Wikimedia under Creative Commons License.
5

After the introduction of horsedrawn trolleys in 1868, Stuttgart became the first German city with a streetcar network. In 1891, Stuttgart became the third city in Germany to introduce cogwheel railway, also known as electric tram railway system. Stuttgart Tram Museum, Strassenbahnmuseum in German, reflects this historical transformation and houses impressive tram exhibitions. In this spacious environment, visitors can observe a large selection of different types and colours of trams, restored vehicles and other related objects, some of which are more than 140 years old.

Image by Xocolatl on Wikimedia under Creative Commons License.
6

Each year the Wasen hosts the Cannstatter Volksfest and the Stuttgart Spring Festival, along with other events such as concerts and circuses.

Image by Enslin on Wikimedia under Creative Commons License.
Sight description based on wikipedia
7

The Mercedes-Benz Arena is a stadium located in Stuttgart and home to German Bundesliga club VfB Stuttgart. Before 1993 it was called Neckarstadion, named after the nearby river Neckar and between 1993 and July 2008 it was called Gottlieb-Daimler-Stadion. From the 2008-09 season, the stadium was renamed the Mercedes-Benz Arena, starting with a pre-season friendly against Arsenal on 30 July 2008.

The stadium capacity is currently around 41,000, after one stand (Untertürkheimer Kurve) has been demolished during summer 2009 in the process of converting it to a pure football arena. The rebuilt arena will be finished in December 2011 with a new capacity of 60,000, including terracing. Due to UEFA regulations, which only allows seating, the capacity is reduced to 54,906 during international football matches.

The Mercedes-Benz Arena hosted four matches of the 1974 FIFA World Cup, two matches of the 1988 UEFA European Football Championship (a 1st Round match and a semi-final) and six games of the 2006 FIFA World Cup, including a Round of 16 game and the third-place playoff match. The stadium also hosted the finals of the European Cup in 1959 (Real Madrid vs. Stade de Reims) and 1988 (PSV Eindhoven vs. S.L. Benfica).
Image by MSeses on Wikimedia under Creative Commons License.
Sight description based on wikipedia
8

The Mercedes-Benz Museum is an automotive museum housed in Stuttgart, Germany. The current building, which stands directly outside the main gate of the Daimler factory, was designed by the UN Studio. It is based on a unique cloverleaf concept using three overlapping circles, with the center removed to form a triangular atrium. The building was completed and opened in 2006. Previously, the museum was housed in a dedicated building within the factory complex and visitors had, in recent decades, been transported from the main gate by a secured shuttle. The building's height and "double helix" interior were designed to maximize space, providing 16,500 square meters of exhibition space on a footprint of just 4,800 square meters. The museum contains more than 160 vehicles, some dating back to the very earliest days of the motor engine. The museum provides visitors with free audio tours in a variety of languages.