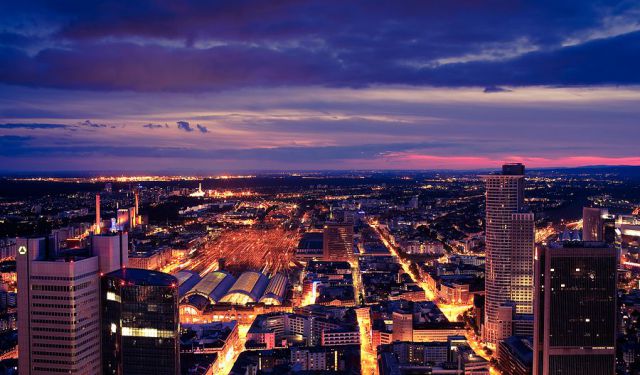 Image by photomek on Wikimedia under Creative Commons License.

The Bahnhofsviertel, which literally means "train station quarter", is a small district of Frankfurt am Main, in fact it is the 2nd smallest district in the city, being not much larger than Altstadt (old town). Bahnhofsviertel is home to the Hauptbahnhof (Main Railway Station), many skyscrapers and Frankfurt's very own red light district.
How it works: Download the app "GPSmyCity: Walks in 1K+ Cities" from iTunes App Store or Google Play to your mobile phone or tablet. The app turns your mobile device into a personal tour guide and its built-in GPS navigation functions guide you from one tour stop to next. The app works offline, so no data plan is needed when traveling abroad.

Münchener Straße runs parallel to the Kaiserstrasse, and is easily accessible by tram. High buildings have at their base many shops and restaurants. The street is dominated by international visitors who dine at cafés and restaurants. Small stores sell a wide range of products: including groceries, household equipment, electronics, and jewelry.
Image by Eva K. on Wikimedia under Creative Commons License.
2

Architecturally, the Kaiserstrasse is one of the last remaining avenues in Frankfurt. The historic houses date to the beginning of the 19th century, and visitors are constantly impressed with the ornate sandstone facades. The Kaiserstrasse also provides multi-purpose retail stores, an attractive weekly market, as well as sidewalk cafés and restaurants.
Image by Dontworry on Wikimedia under Creative Commons License.
3

The Gallileo Tower is located in the financial district of Frankfurt across the street from the Eurotower. The name of the tower is derived from the nearby Gallusanlage Park and the astronomer Galileo.

The Gallileo tower was built between 1998 and 2003 to house the investment banking offices of the Dresdner Bank now taken over by the Commerzbank. The other offices of the bank are in the nearby Silver Tower. Another high rise structure built in 1951 called the Zinssertum was torn down to make way for this skyscraper in 1996. The tower is the 14th tallest building in Frankfurt.

The Gallileo Tower is 136 meters tall. The structure consists of two towers, a 138 meter north tower and a 114 meter south tower connected by a core that runs through the 136 meter height of the building. It has a glass facade with 400 windows making a glass skin around the structure that has an area of 22,000 square meters. The unique reflective floor slabs were designed by the American artist James Turrel to make the building glow from inside at night.

For visitors, the tower is an attraction because of the English theater located in the ground floor. There are also a few shops and a bar near the theater.

Image by dontworry on Wikimedia under Creative Commons License.
Sight description based on wikipedia
4

The Silver Tower was the tallest building in Germany till 1991. The main administrative offices of one of the major banks in Germany, the Dresdner Bank are located in the building. Its location is the Jurgen Ponto Platz in the financial district of Frankfurt.

The Silver tower was constructed between 1975 and 1978 by the Mannheim based international company Bilfinger Berger. The façade is made of aluminum and glass giving it a silver glow. The plaza on which the building stands is named after Jurgen Ponto a former CEO of the Dresdner Bank who was slain by the then active Red Army. The tower is 166 meters high with 32 floors. The design is of four structures with rounded edges. The rounded edges are a unique feature among skyscrapers in Frankfurt. The electric wires run below the high floors and the air conditioning is above the suspended ceilings that cause the elevation in the floors.

Other interesting facets of the Silver Tower are a concert hall where artists sponsored by the Jurgen Ponto foundation perform and a small neon artwork gallery at the top floor. The hallways are also decorated with neon art. At the top of the building is an auditorium with floor to ceiling windows offering a panoramic view.
Image by Melkom on Wikimedia under Creative Commons License.
Sight description based on wikipedia
5

Skyper is a building complex in the Bahnhofsviertel district of Frankfurt, Germany. The tallest of the three buildings is a 38-storey, 154 m (505 ft) skyscraper. Its quadrant-shaped silhouette is a distinctive part of the Frankfurt cityscape. Situated a street over from the Silver Tower, the skyscraper replaced the Philipp Holzmann building and the construction costs were estimated at 425 million dollars. Completed in 2004, the tower is linked by a 9 m (30 ft) glass atrium to a neo-classical villa dating from 1915. The villa is listed as a building of historical importance and once belonged, along with the site as a whole, to the Philipp Holzmann construction group, which used the property as its corporate head office. A residential and commercial building with 52 one- to three-room apartments and ground-floor retail space completes the ensemble. Skyper has been owned since 2006 by an investment company belonging to the Swiss banking group UBS.
Image by Luidger on Wikimedia under Creative Commons License.
Sight description based on wikipedia
6

The Trianon is the fifth tallest building in Frankfurt and has an approximate height of 186 meters. The construction of The Trianon was completed in 1993. The building likely received its name from the triangular design. It serves as the company headquarters for DekaBank, other tenants are Linklaters and Franklin Templeton. Atop the building is an upside-down pyramid suspended from the three corners.
Image by timsdad on Wikimedia under Creative Commons License.
Sight description based on wikipedia
7

Frankfurter Büro Center (English: Frankfurt Office Centre), also known as FBC, is a 40-storey, 142 m (466 ft) skyscraper in the Westend-Süd district of Frankfurt, Germany. The Frankfurt Büro Center was built in 1980. The modernist Büro Center was constructed with granite and aluminum. The interior features a gigantic air conditioner which provides "ecological" air to all floors of the Büro Center. On the square in front of the tower was set up in 1997 a 21 m (69 ft) sculpture of the artist Claus Bury.
Image by Melkom on Wikimedia under Creative Commons License.
Sight description based on wikipedia
8

Westend-Tower is not your stereotypical skyscraper with commercial offices. In 1995, Westendstraße 1, as it's known by locals, won the "Best Building of the Year" award for its multi-functional design and architecture. Westendstraße 1 is a 53-storey, 208 m (682 ft) skyscraper in the Westend-Süd district of Frankfurt. The structure was completed in 1993 and together with the nearby City-Haus, forms the headquarters of DZ Bank. The tower is the third tallest skyscraper in Frankfurt and also in Germany. The facade consists of fine, golden granite, giving it a white and bright appearance from afar. The building was designed by architect William Pedersen. The characteristic ring beam at the top of the tower (known commonly as the crown) is a reminiscent of the Statue of Liberty, but is also intended as a reminder to Frankfurt's history as the city where German emperors were crowned. The crown faces towards the old part of Frankfurt where the coronations were held at the Frankfurt Cathedral. The 95 tonne steel crown is heated in winter to prevent the forming of icicles which could potentially endanger pedestrians or cars on the street below. A sculpture by Claes Oldenburg and Coosje van Bruggen, called Inverted Collar and Tie is set up in front of the entrance.
Image by Erebus555 on Wikimedia under Creative Commons License.
Sight description based on wikipedia
9

One of the many skyscrapers of Frankfurt is the City Haus located in the West End at the Republic Square. The high rise office building is 142 meters tall and has 42 floors. When the building opened its doors, it was the second tallest building in Germany.

City Haus was constructed based on plans drawn by architects Johannes Krahn and Richard Heil. The building was ready for use in 1974. City Haus courted controversy throughout its construction period. A section of citizens objected to high rise buildings coming in the location when construction began. While work was underway, a fire broke out in 1973 delaying the completion of the structure. Finally, the bronzed aluminum facade gave a dull forbidding appearance that was unappealing to locals and visitors. At first City Haus was called Selmi Hochhaus after its Persian owner Ali Selmi. In 1976, the building was acquired by the DG Bank, now called the DZ Bank. The bank built a seven floor extension called City Haus II in 1986.

In 2006, the DZ Bank carried out extensive renovations to the building with the help of Frankfurt firm, Christoph Mackler Architects. The result was a new facade that allowed natural light and gave City Haus a clean and green appearance. Today, the structure conforms to European energy conservation regulations. There is also an art gallery in the building with a separate entrance that visitors can use to view the exhibits.
Image by Dzbank-kmmo on Wikimedia under Creative Commons License.
Sight description based on wikipedia