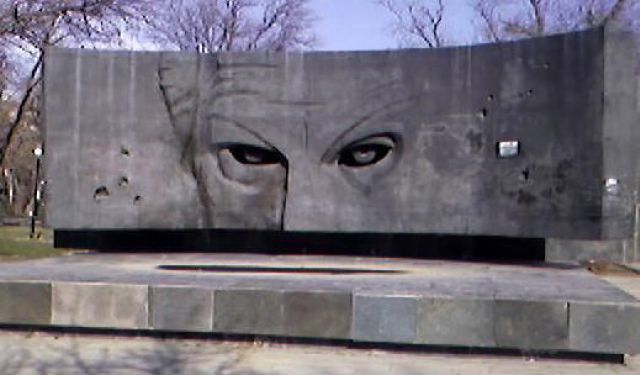 Image by Brandmeister on Wikimedia under Creative Commons License.

The city of Baku is famous for its beautiful architecture, but the Azerbaijani capital is also home to numerous remarkable statues and monuments. Created over the course of the last century, these monuments adorn parks and squares throughout the city. They are dedicated to national figures such as poets, writers, dramatists, philosophers and politicians. Take our tour to see the best monuments and statues in Baku.
How it works: Download the app "GPSmyCity: Walks in 1K+ Cities" from iTunes App Store or Google Play to your mobile phone or tablet. The app turns your mobile device into a personal tour guide and its built-in GPS navigation functions guide you from one tour stop to next. The app works offline, so no data plan is needed when traveling abroad.

Dating from 1958, this sculpture on Neftchilar Avenue depicts a scene from the famous poem “Seven Beauties” by Nizami. Designed by architect Shulgin, this sculpture shows a prince charming fighting with a dragon. Situated inside a fountain, it symbolizes the triumph of good over eveil. The monument’s name comes from Bahram Gur, a 14th Sassanid King of Persia who was immortalized for his bravery in Nizami’s poem.
Image by Gulustan on Wikimedia under Creative Commons License.
2

Located in Old Town Baku, the Vahid Monument is dedicated to poet Aliagha Isgandarov. This self-trained writer created many beautiful poems and translated some Azerbaijani classics. The sculpture itself was designed by R. Hasanov in 1990.
Image by Emin Bashirov on Wikimedia under Creative Commons License.
3

The Natavan Monument is dedicated to Khurshidbanu Natavan (1832-1897), the daughter of the last Khan of Karabakh, who is regarded as Azerbaijan’s best lyrical poet. Her lyrical verses about love and nature beautifully rendered the wonder of the world. Erected in 1990, the monument was sculpted by A. Eldar with architects Ismayilov and Leontiev.
Image by Grandmaster on Wikimedia under Creative Commons License.
4

Nizami Ganjavi is considered to have been the greatest lyrical poet of 12th Century Persian literature. Highly appreciated in Muslim countries, Nizami’s influence extended far beyond his native Azerbaijan. The monument was erected for the poet’s 800-year jubilee in 1949 after a design competition involving 60 bidders. F. Abdurrahmanov’s work features a bronze six-meter statue that sits on a nine-meter, eight-sided pedestal of red polished labradorite. The pedestal features relieves based on motifs from Nizami’s poems.
Image by Erik on Flickr under Creative Commons License.
5

This monument is dedicated to Sabir, which was the pen name of Alakbar Tahirzadeh (1862-1911), a very distinguished Azerbaijani poet, satirist, public figure and professor. Sabir, who began writing at the age of eight, is considered to have single-handedly invented Azerbaijani satire. The monument is located next to Ismayliya Palace. Created in 1958, it is made of bronze, black granite and marble. Sculptor Garyagdy’s imposing work stands nine metres tall.
Image by Samral on Wikimedia under Creative Commons License.
6

Nestled within a small square in the heart of Baku, you’ll find this statue in honor of Mirza-Fatali Ahundov (1812-1878), an Azerbaijani writer, philosopher and public figure. Ahundov had a deep influence on Azerbaijani art and philosophy. Having grown up in Iran, Ahundov began to write dozens of poems, philosophical and historical works as well as six brilliant comedies from the 1830s onwards.
Image by Gulustan on Wikimedia under Creative Commons License.
7

The Fizuli Statue is the centerpiece of Fizuli Square. It’s dedicated to Fizuli Muhammad (1494 -1556), an Azerbaijan poet and thinker who wrote beautiful lyrical poems in Azerbaijani, Arabic and Persian. Situated in front of the Azerbaijan Drama Theatre, the monument is made of bronze with a granite pedestal. The sculptors Tokay Mamedov and Omar Eldar won silver medals of USSR Academy of Arts for this great project.
Image by Nick Taylor on Flickr under Creative Commons License.
8

The Liberated Woman Statue is one of the most significant monuments in Baku. It is dedicated to the struggle of the people of Azerbaijan over the yashmak, an item of women’s clothing that came to symbolize feudal oppression and social inequality. The struggle to have the yashmak abolished ended in success early in the 20th Century.
Image by Alakbaroff on Wikimedia under Creative Commons License.
9

The Heydar Aliyev Monument sits in front of the palace named in his honor. Erected in 2005, this five-metre bronze statue stands on a six-metre marble base, with three fountains nearby. Former Azerbaijani president Heydar Aliyev (1923-2003) was a distinguished political and state figure who had a strong hand in the country’s history in recent decades.
Image by User:Kamran199 on Wikimedia under Creative Commons License.
10

This monument was erected in 1961 in memory of Samed Vurgun (1906-1956), a famous Azerbaijani poet and public figure. The founder of the new Azerbaijan school of poetry, Vurgun is thought to have written some of the finest examples of modern poetry in the region. He has been recognized with many awards and titles.
Image by Unknown on Wikimedia under Creative Commons License.
11

Erected in 2001 on Puskin Square, this monument marks the 200-year jubilee of the great Russian poet, playwright and novelist Alexander Pushkin. This 19th Century legend was a true giant of Russian literature.
Image by karpidis on Wikimedia under Creative Commons License.