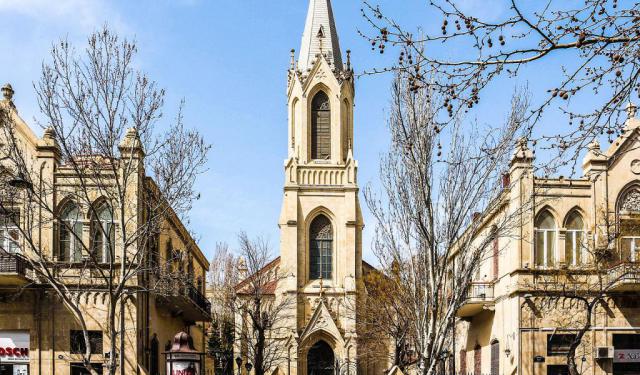 Image by Sefer azeri on Wikimedia under Creative Commons License.

While Azerbaijan is a predominantly Islamic country, there are also a number of Catholic and Orthodox churches in Baku, as well as Jewish synagogues. The city is most famous for its old mosques, which go all the way back to the 11th Century and are Baku’s top attraction for many visitors. Take our Places of Worship tour to see all the most prominent sacred sites in the city.
How it works: Download the app "GPSmyCity: Walks in 1K+ Cities" from iTunes App Store or Google Play to your mobile phone or tablet. The app turns your mobile device into a personal tour guide and its built-in GPS navigation functions guide you from one tour stop to next. The app works offline, so no data plan is needed when traveling abroad.

Interior of the mosque has an area of 1400 square meters and decorated with ornaments of painting schools of Azerbaijan plus with samples from eastern ornaments. The height of the dome and a half meters. The mihrab and dome of the mosque made of marble, while decorative elements of the mosque, the tops of minarets and labels are made of gold.

Image by Ismail Valiyev on Wikimedia under Creative Commons License.
Sight description based on wikipedia
2

The Russian Orthodox Church of Archangel Michael is the oldest church in Baku. Constructed in the 19th Century by marine officials, it was originally named the Naval Church. It even had a prayer hall in the shape of a boat deck. Today the church stands as a fantastic example of Russian Orthodox architecture, with its original gilded decorations still in place as well as many wonderful religious artworks along its walls.
Image by Violette79 on Flickr under Creative Commons License.
3

While most of Baku’s mosques were built in medieval or pre-medieval times, others were erected at the turn of the 19th Century, including the Qasim Bey Mosque. Financed by a private citizen, this large mosque boasts a beautiful blue dome among many interesting architectural features. It’s one of the most frequented mosques in the city, especially among young Muslims.
Image by Cezary Piwowarski on Wikimedia under Creative Commons License.
4

St. Gregory the Illuminator's Church is a former Armenian Apostolic church in downtown Baku. It was built in 1887 and survived through the radical atheist age of Sovietization, and the conflict between Armenia and Azerbaijan over Nagorno-Karabakh.

Unlike many places of worship that were subject to demolition throughout the Soviet Union in the 1920s and the 1930s, St. Gregory the Illuminator's Church was the only Armenian church that was not demolished. In 1990, during the exodus and deportation of the entire Armenian population from Azerbaijan, the church was closed down and damaged, and is no longer open to the public.

From 1990 until 2002, its future status remained undetermined. In 2002, the church building underwent renovation and the final decision was made, that its cease of existence as a church is permanent, and the building was taken over by the Presidential Administration of Azerbaijan to be used as one of its libraries. According to the Presidential Administration of Azerbaijan which now owns the building, the former Armenian Church is not intended to be a place of worship again and the cross was removed from the dome of the church. The repair works were carried out for this purpose. And the library of the former church consisting of 5,000 books and manuscripts which has been preserved, was transformed into the archive department of the Department of Administration Affairs of the Presidential Administration of Azerbaijan.
Image by Aleksander Dragnes on Wikimedia under Creative Commons License.
Sight description based on wikipedia
5

The Lezgi Mosque is one of the oldest mosques – indeed, building of any kind – in the city. Located in Baku’s Old Town district, it stands today as a religious, historical and cultural landmark of Azerbaijan. It is thought to have been built by Najaf Ashour, son of Ibrahim, in around 1169. Then known as Ashour’s mosque, it got its current name in 1920. Today a UNESCO World Cultural Heritage site, it regularly draws worshippers from all over the city.
Image by Самый древний on Wikimedia under Creative Commons License.
6

The Mosque Juma, or Friday Mosque, is a late 19th Century building erected by a local wealthy man. It sits on a site that is thought to have been the location of an ancient temple of fire worshippers. The current mosque stands out both for its cone-shaped dome and colorful ornamented tiles. The minaret which adjoins the mosque has been in place since 1437, and today represents an excellent example of traditional Azerbaijan architecture.
Image by Aleksander Dragnes on Flickr under Creative Commons License.
7

According to Arabic inscription which was saved in front of doorway of northern wall of the mosque, it was built by ustad-rais Muhammad the son of Abu Bakr in 471 of Hijra. It means that the architect was not only a master-ustad, but also a rais-head of artificers’ corporation.
Image by SibFreak on Wikimedia under Creative Commons License.
Sight description based on wikipedia
8

The Palace of the Shirvanshahs is a massive complex from the Middle Ages that includes a palace, mosque, mausoleum and gates. The Palace Mosque (from the 1430s) is situated in the lower court of the complex. It has two chapels for prayer for men and women, as well as a tall minaret. There is an inscription on the minaret which reads, "The greatest Soltan Khalilullah I ordered to build this minaret. May Allah exalt the days of his governing and reign. The year of 845" (1441-1442).
Image by Самый древний on Wikimedia under Creative Commons License.
Sight description based on wikipedia