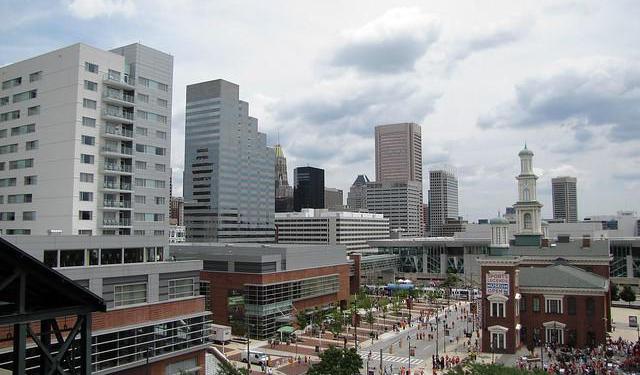 Image by redlegsfan21 on Flickr under Creative Commons License.

This tour offers a great insight into the daily life of Baltimoreans. This tour will guide you to places where locals regularly go to pray, study, eat, shop, dance, and enjoy themselves. Get a sense of the inner energy of the city and see Baltimore how locals see it with our Baltimore Daily Life Walking Tour.
How it works: Download the app "GPSmyCity: Walks in 1K+ Cities" from iTunes App Store or Google Play to your mobile phone or tablet. The app turns your mobile device into a personal tour guide and its built-in GPS navigation functions guide you from one tour stop to next. The app works offline, so no data plan is needed when traveling abroad.

The Hippodrome Theatre is a former vaudeville theater in Baltimore, Maryland. Built in 1914 for impresarios Pierce and Scheck, the 2300-seat theater was the foremost vaudeville house in Baltimore, as well as a movie theater. The Hippodrome was designed by Thomas White Lamb, one of the foremost theater architects of his time. Lamb gave the theater an unusually strong presence on Eutaw Street through the use of brick and terra cotta on a massive façade. The Hippodrome has been recently renovated for use as a performing arts theater, and is part of the France-Merrick Performing Arts Center.

The site had previously been occupied by the Eutaw House Hotel, built in 1835. The new theater had an original capacity of 3000 seats and boasted a Moller organ, as well as a house orchestra that survived into the 1950s. The Hippodrome was operated by the Loew's chain from 1917 to 1924, then by Keith's. The Hippodrome finally closed in 1990 as the last movie theater in downtown Baltimore.

Image by ckramer on Flickr under Creative Commons License.
Sight description based on wikipedia
2

Lexington Market is one of the longest running markets in the world, having been around since 1782. The market continues to stand in its original site. The land for this historical market was donated by General John Eager Howard. The market originally operated without sheds and stalls. Farmers would load up their horse drawn wagons with ham, butter, eggs and produce. The farmers would travel from Towson and Reisterstown to sell their goods at the market. They would usually start work by dawn.

In 1803 the market had increased in size. In the beginning the market was open on Tuesdays, Friday and Saturday from 2am until 12noon. A bell would ring at the start of the day and at the end of the day. Before being called Lexington Market it was known as Western Precincts Market.
Image by danielle_blue on Flickr under Creative Commons License.
Sight description based on wikipedia
3

The Enoch Pratt Free Library is the public library system of Baltimore, Maryland. Its Central Library occupies the eastern half of a city block bounded by Franklin Street to the north, Cathedral Street to the east, Mulberry Street to the south and Park Avenue to the west. The flagship of the system, it was designated the State Library Resource Center by the Maryland General Assembly in 1971. The system also includes twenty-two branches each located throughout the city.

Its establishment began on January 21, 1882 when philanthropist Enoch Pratt offered a gift of a central library, four branch libraries and a financial endowment of US $1,058,333 to Mayor William Pinkney Whyte and the City Council. His intention was to establish a library that "shall be for all, rich and poor without distinction of race or color, who, when properly accredited, can take out the books if they will handle them carefully and return them." The grant was accepted by the civic government and approved by voters later that year on October 25.

4) Baltimore School for the Arts

The Baltimore School for the Arts (BSA) is a public arts high school located in Baltimore and is a part of its public school system. BSA offers concentrations in vocal music, instrumental music, theater acting, theater production, dance, and visual arts. The school has produced numerous "Presidential Scholars" in the Arts and its students have gone on to attend major conservatories and Ivy League Schools.

In 1979, the President of the School Board authored a charter creating the Baltimore School for the Arts. In the form of a resolution of the school board, this charter followed many years of effort to create an arts high school, including a 1978 recommendation of the special Task Force appointed by Mayor William Donald Schaefer. The BSA was created as part of the Baltimore school system, however the charter provided the BSA with the structure and the authority to design and implement policies and programs necessary to be successful in its mission as a pre-professional arts high school. The charter stated "that it differ from other Baltimore city high schools by training students with potential for careers in the performing and visual arts."

The Corpus Christi Church is a Roman Catholic Church that opened in 1891. Open to all, it's a perfect place to enter for quiet prayer. Built in a 13th Century Gothic style, the church's decor revolves around the theme of wine and wheat from the translation of Corpus Christi - “Body of Christ”.
Image by curiouslee on Flickr under Creative Commons License.
6

The Station North ARTS CAFE Gallery is seen by many Baltimoreans as a nice spot for lunch. The prices are quite reasonable and the menu is diverse, it's also a very friendly place with great customer service. While you're eating, have a look out for the rotating art exhibits in the dining area.
Image by Refracted Moments™ on Flickr under Creative Commons License.