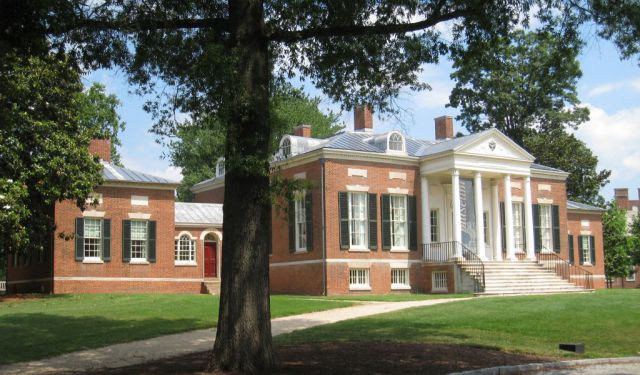 In just a few hours on your next trip to Baltimore, you can get a unique flavor of the history of the city at its great museums. There's Edgar Allan Poe House, the birthplace of American railroading at B & O Railroad Museum and celebrity dentures at the National Museum of Dentistry.
How it works: Download the app "GPSmyCity: Walks in 1K+ Cities" from iTunes App Store or Google Play to your mobile phone or tablet. The app turns your mobile device into a personal tour guide and its built-in GPS navigation functions guide you from one tour stop to next. The app works offline, so no data plan is needed when traveling abroad.

The Edgar Allan Poe House and Museum, located at 203 Amity St. in Baltimore is the former home of American writer Edgar Allan Poe in the 1830s. Now open as a museum, the small unassuming structure is a typical row home, and also houses the Edgar Allan Poe Society of Baltimore. It was designated a National Historic Landmark in 1972. Due to a loss of a subsidy from the city of Baltimore, the Museum may soon have to close its doors.

The Poe House is a 2½ story two-bay brick structure with a gabled metal roof. The front door is on the left side of the west elevation, at the top of a wood stoop. The house is flanked on the north by a contiguous building. A single gabled dormer is centered in the west roof. To the rear a two story ell projects from the south side of the main block. The house sits on the western edge of an active low-income housing project in the west Baltimore neighborhood of Poppleton.

The house is entered through the front living room, with a dining room to the rear and two steps down. From the dining room narrow stairs lead to the dirt-floored basement and the second floor. Two bedrooms occupy the second floor, and stairs lead to a small attic or garret, which may have been occupied by Poe. The house retains the majority of its original woodwork.

Image by Midnightdreary on Wikimedia under Creative Commons License.
Sight description based on wikipedia
2

The B&O Railroad Museum is a museum exhibiting historic railroad equipment in Baltimore, originally named the Baltimore & Ohio Transportation Museum when it opened on July 4, 1953. It has been called one of the most significant collections of railroad treasures in the world and has the largest collection of 19th-century locomotives in the U.S. The museum is located in the Baltimore and Ohio Railroad's old Mount Clare Station and adjacent roundhouse, part of the B&O's sprawling Mount Clare Shops site begun in 1829, the oldest railroad manufacturing complex in the United States.

The collection includes 250 pieces of railroad rolling stock, 15,000 artifacts, 5000 cubic feet (140 m³) of archival material, four significant 19th-century buildings, including the historic roundhouse, and a mile of track, considered the most historic mile of railroad track in the United States. Train rides are offered on the mile of track on Wednesday through Sunday from April through December and weekends in January. In 2002, the museum had 160,000 visitors annually.

The museum also features an outdoor G-scale layout, an indoor HO scale model, and a wooden model train that children will enjoy climbing on. From Thanksgiving through the New Year, local model railroad groups set up large layouts on the roundhouse floor and in select locations on the grounds of the museum. A museum store offers toys, books, DVDs and other railroad-related items.

Image by JGHowes on Wikimedia under Creative Commons License.
Sight description based on wikipedia
3

The Dr. Samuel D. Harris National Museum of Dentistry - located in Baltimore and opened in 1996—preserves and exhibits the history of dentistry in United States and throughout the world. Situated on the campus of the University of Maryland, Baltimore, home of the world's first dental school, it exhibits numerous artifacts concerning dentistry throughout the ages as well as exhibits on oral health and dentistry professionals. Highlights of the collection include George Washington's not-so-wooden dentures, Queen Victoria's dental instruments, and the world's only Tooth Jukebox.

The museum has also been honored by receiving congressional designation as the nation’s official dental museum (2003) and is an affiliate of the Smithsonian Institution.

Operation hours: by appointment only
Image by brewbooks on Flickr under Creative Commons License.
Sight description based on wikipedia
4

The Walters Art Museum, located in Baltimore, Maryland's Mount Vernon neighborhood, is a public art museum founded in 1934. The museum's collection was amassed substantially by two men, William Thompson Walters (1819–1894), who began serious collecting when he moved to Paris at the outbreak of the American Civil War, and his son Henry Walters (1848–1931), who refined the collection and rehoused it in a palazzo building on Charles Street which opened in 1909. Upon his death, Henry Walters bequeathed the collection of over 22,000 works and the original Charles Street palazzo building to the city of Baltimore, “for the benefit of the public.” The collection touches masterworks of ancient Egypt, Greek sculpture and Roman sarcophagi, medieval ivories, illuminated manuscripts, Renaissance bronzes, Old Master and 19th-century paintings, Chinese ceramics and bronzes, and Art Deco jewelry.

In 2000, the Walters Art Gallery changed its name to the Walters Art Museum to reflect its image as a large public institution. The following year, the museum reopened its largest building after a dramatic three-year renovation.

Starting Sunday, October 1, 2006, the Baltimore Museum of Art and the Walters Art Museum began having free admission year-round as a result of grants given by Baltimore City and Baltimore County. In 2012 the museum released nearly 20,000 of its own images of the collections on a Creative Commons license, and collaborated in their upload to Wikimedia Commons.

The Baltimore Civil War Museum is operated by the Maryland Historical Society. This museum has exhibits that describe the most volatile times in American history. It provides information about the Civil War and slaves' escape through the Underground Railroad. It's also a great place to learn more about the state of Maryland and its pivotal position in US history.

The Frederick Douglass-Isaac Myers Museum & Maritime Park is an important part of African American heritage as well as maritime history. It offers wonderful views of the Inner Harbor, and includes a large space for permanent and temporary galleries and learning centers. The building itself used to be owned by Isaac Myers, an African American who was a leader and founder of Cheasapeake Railway. You can learn more about him inside the museum.