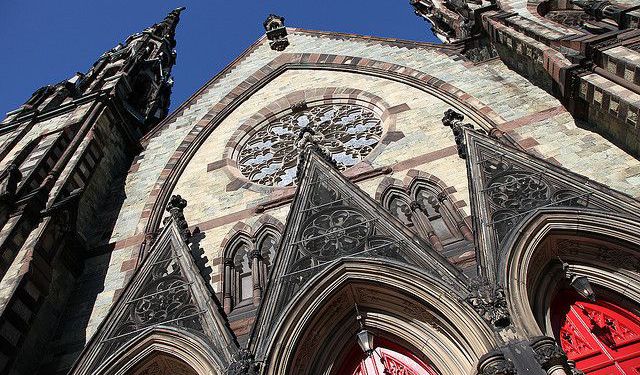 Baltimore has many beautiful places of worship, including several buildings listed as National Historic Landmarks. A number of different faiths are represented including Presbyterian, Methodist, Unitarian, Episcopal, Lutheran and Roman Catholic. Take our Places of Worship tour to see the most impressive churches in the city, which come in all different styles including Gothic revival, Norman-Gothic, Tudor-Gothic, 12th Century Italian, Romanesque elements, neoclassical, classical and more.
Image Courtesy of Flickr and hsuyo.
How it works: Download the app "GPSmyCity: Walks in 1K+ Cities" from iTunes App Store or Google Play to your mobile phone or tablet. The app turns your mobile device into a personal tour guide and its built-in GPS navigation functions guide you from one tour stop to next. The app works offline, so no data plan is needed when traveling abroad.

The First & Franklin Street Presbyterian Church is a rectangular building in Gothic revival style. Its exterior is made of beautiful rose colored Brunswick freestone, while the interior is magnificent in both style and design, especially the charming and grandiose triple ceiling. Baltimore's oldest Presbyterian church, it was established in 1761.
Image Courtesy of Flickr and Baltimore Heritage.
2

The Mount Vernon Place United was established in 1872. This historic United Methodist church was built in a Norman-Gothic style. It's considered by American Institute of Architects as the most important architectural structure in Baltimore, and is listed on the National Register of Historic Places. All are welcome for Sunday worship each week at 11am.
Image Courtesy of Flickr and eli.pousson.
3

Image Courtesy of Wikimedia and E. H. Pickering.
Sight description based on Wikipedia.
4

The Franklin Street Presbyterian Church and Parsonage was built in 1847. It was designed by architect Robert Cary Long, Jr in a Tudor Gothic style. The front features two 60 foot flanking octagonal towers are also crenelated and have louvered belfry openings and stained glass Gothic-arched windows. The parsonage has walls of brick, heavy Tudor-Gothic window hoods, and battlements atop the roof and was built in 1857. No longer used by a Presbyterian congregation, the church and parsonage were listed on the National Register of Historic Places on November 5, 1971. They are included within the Cathedral Hill Historic District and the Baltimore National Heritage Area.
Image Courtesy of Wikimedia and Smallbones.
Sight description based on Wikipedia.
5

5) Basilica of the Assumption (must see)


Image Courtesy of Wikimedia and Basilica1.
Sight description based on Wikipedia.
6

The St. Alphonsus Catholic Church was designed by architect Robert Cary Long in 1845 in a German Neo-Gothic style. It served the city's German community for 72 years. It's considered by followers to be an important religious site because of the saints who have come to pray here.
Image Courtesy of Flickr and Derek & Kristi.
7

The present church was designed by renowned architect Richard Upjohn, with an eclectic juxtaposition of 12th-century Italian elements on the exterior and Romanesque elements on the interior. The exterior facade features two bas-reliefs, executed by the Italian sculptor Antonio Capellano that were originally part of the façade of the previous church. Other elements from the 1817 structure include the walls of the Federal period building, a stained glass window of the risen Christ over the entrance, a marble baptismal font designed by Maximillian Godefroy, and the Bishop’s chair given to St. Paul’s in 1815.
Image Courtesy of Wikimedia and Smallbones.
Sight description based on Wikipedia.
8

Zion Lutheran Church, also known as the Zion Church of the City of Baltimore (formerly known as the German Lutheran Reformed Church), is a historic Lutheran church located in Baltimore, Maryland, United States. The congregation was founded in 1755 in order to serve the needs of Lutheran immigrants from Germany, as well as Germans from Pennsylvania who moved to Baltimore. It has a bilingual congregation that provides sermons in both German and English. In 1762 the congregation built its first church on Fish Street (later East Fayette Street). It was replaced by a bigger building, the current Zion Church on North Gay Street, erected from 1807 to 1808 in a Georgian/Federal-era style. An additional expansion of the church to the west along East Lexington Street to North Holliday Street composed of an "Adlersaal" (Parish House), bell tower, parsonage and a enclosed garden designed of Hanseatic North German architecture was constructed under Rev. Julius K. Hoffman in 1912-1913. In the late 1920s, the entire block south of the church was razed to form a monumental square (known as "War Memorial Plaza" or "City Hall Plaza") opposite the Baltimore City Hall of 1875 on the western side and construction at the eastern end of the War Memorial Building with an auditorium, historical exhibit area and veterans organizations offices. On the south side of the church buildings facing the plaza, a new headquarters for the Baltimore City Fire Department was constructed in a Georgian-Federal style complementing the original Zion Church around the corner.
Image Courtesy of Flickr and sneakerdog.
Sight description based on Wikipedia.
9

St. Vincent de Paul Church is a historic Roman Catholic church located at 120 N. Front Street, Baltimore. The church was dedicated in 1841 and is "the oldest Catholic parish church in continuous use in Baltimore."

The church building itself is neoclassical style with brick walls painted white to give it the appearance of wood. Inside there are cast iron columns for support. While the interior has been remodeled several times, the exterior of the church has never been altered.

The church features a slender Georgian-style brick tower, painted white, which rises to a height of 150 feet above the narthex and contrasts sharply with its surroundings. The tower rests on an octagonal base and supports three successive indented tiers (one octagonal and two cylindrical), capped by a copper-sheathed dome and twelve-foot cross.
Image Courtesy of Wikimedia and Concord.
Sight description based on Wikipedia.
10

The Saint Leo Roman Catholic Church was built in 1880, and has been on the Register of National Historic Places since 1983. Its architecture combines both classical and Romanesque styles. There is a beautiful large rose window in the main façade.
Image Courtesy of Flickr and jrozwado.