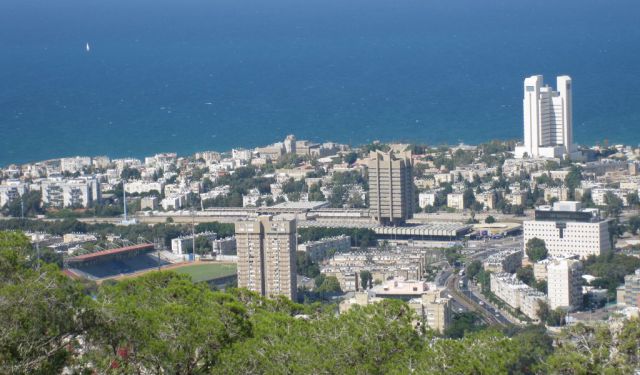 Image by Deror avi on Wikimedia under Creative Commons License.

One of Haifa’s oldest neighborhoods, Bat Galim is located in one of the most picturesque areas of the city. First settled in the 1920s, the neighborhood extends from the bottom of Mount Carmel to the Bat Galim Bay. Popular for walking tours, the area is home to many famous landmarks, such as the Rambam Medical Center, the National Maritime Museum and Elijah's Cave. Take this tour to see the best of the Bat Galim neighborhood.
How it works: Download the app "GPSmyCity: Walks in 1K+ Cities" from iTunes App Store or Google Play to your mobile phone or tablet. The app turns your mobile device into a personal tour guide and its built-in GPS navigation functions guide you from one tour stop to next. The app works offline, so no data plan is needed when traveling abroad.

Established in 1953, the National Maritime Museum has the largest collection of its kind in all of Israel. The museum wonderful exhibits include a collection of ancient ship models and a collection of scientific instruments. Here you can also see the first color navigational maps as well as a unique coin collection.

Why You Should Visit:
Wonderful place for everyone that grew up on adventure books (pirates, whalers, explorers), with plenty of great activities for kids as well.
Ancient anchors several thousand years old, Greek statues, Roman mosaics, amphoras from the seabed, and even a battering ram – the best preserved in the entire world!

Tip:
Be sure to see the museum's Pirate section as it is unusual to have this information presented visually, outside of film.


Image by Bukvoed on Wikimedia under Creative Commons License.
2

Elijah’s Cave is one of the most popular landmarks in Haifa and the surrounding region. Located just at the bottom of Mount Carmel, the cave is believed to have served as the home of the prophet Elijah, who in the 9th century BC was hiding from the King Ahab and his wife Jezebel. This Holy place has a special area for visitors to place prayer notes.

Why You Should Visit:
This spot played a role in three major faiths and is an active, prayerful and sacred site.
Worth going to for the location and spectacular view (Elijah sure had good taste) if nothing else!

Tip:
Make sure to have head covering for women visitors and cap for the men (there may be some loaners) if you go inside.

The Bahai Cemetery is located in between two famous Haifa museums - The National Maritime Museum and the Clandestine Immigration and Naval Museum. It is the burial site for members of the extensive Bahai community, one of the predominant communities of the city. On the same site you’ll find other important buildings of Bahai Faith, such as the Mausoleum of the Báb.
Image by Ori~ on Wikimedia under Creative Commons License.
4

Clandestine Immigration and Naval Museum (also called: The National Israeli Museum of the Sea) is an Israel navy museum located in Haifa. The museum covers the maritime history of Israel – from clandestine immigration during the British Mandate for Palestine through the history of the Israeli navy since its inception to the present. The museum is named after David HaCohen, one of the leaders of the Jewish community. It was established by Colonel Yoske Coral and opened to the public in 1969. The museum is run by the Israeli Ministry of Defense.

Why You Should Visit:
Not the slickest, glossiest museum you'll go to, but it's quite compelling, with some really fantastic stories and items that bring the stories to life.
You get to board the actual ship that carried many Jews to Palestine and see what cramped and nearly impossible conditions they lived under.
If you're a history buff, or if Israel has a special place in your heart, you will love learning about this naval museum.

The Old Casino building is located just on the shoreline in the Bat Galim area of Haifa. Despite its name, it was never home to any gambling but was an entertainment center for rich locals. Constructed during the period of British Mandate, this landmark building also attracted many British officers in its heyday.
Image by אבישי טייכר on Wikimedia under Creative Commons License.
6

The famous Bat Galim Beach is considered one of the best places for windsurfing in the whole Mediterranean region. This unique place offers good conditions for windsurfing almost all year round, due to strong winds and great waves. This is also a great place for sunbathing and swimming.
Image by josh.ev9 on Flickr under Creative Commons License.
7

The Haifa Bat Galim Railway Station is a passenger railway station on the north-south coastal railway line which serves the city of Haifa. Located on the southern edge of the Bat Galim neighborhood, the station was built in 1975 along with the Haifa Bat Galim Central Bus Station on the same site. This large transport center is a main hub for the area, with a useful pedestrian tunnel that links the railway station, bus station and the HaHagana Boulevard.
Image by David King on Wikimedia under Creative Commons License.
Sight description based on wikipedia
8

Established in 1938, the Rambam Health Care Campus is the largest medical center in northern Israel. It is named after the 12th Century physician-philosopher Rabbi Moshe Ben-Maimon (Maimonides), known in short as Rambam. This multidisciplinary medical center admits 75,000 patients every year, and another 500,000 are treated in its outpatient clinics and medical institutes. Adjacent to the hospital is the Technion's medical school. Bauhaus architect Erich Mendelsohn was commissioned to design the building on a half-moon shaped headland at the foot of Mount Carmel, northwest of Haifa Port. After the establishment of the State of Israel in 1948, the hospital was renamed for Rambam.
Image by Golf Bravo on Wikimedia under Creative Commons License.
Sight description based on wikipedia
9

Located near Saint Gabriel church, the Haifa War Cemetery was originally part of the German cemetery founded here in 1918. Today it is called ‘British War Cemetery’, and here lie British soldiers who gave their lives on the territory of Israel during World War II.
Image by Ori~ on Wikimedia under Creative Commons License.
10

The Church of Saint Gabriel was built in 1930 by talented architect Gabriel Faud Saad. This modest, beautiful little Catholic church was open to the community until 1948. Though it is has been closed for many years, it remains still one of the most popular landmarks in the Bat Galim area.
Image by Padres Hana on Wikimedia under Creative Commons License.