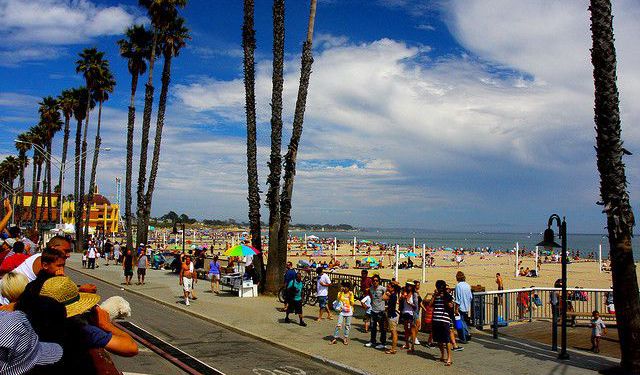 Image by the_tahoe_guy on Flickr under Creative Commons License.

Santa Cruz is home to many beautiful and unique beaches. You will find the major part of the tourists and locals on the sunny beaches, some are surfing, some are enjoying an ice-cream on the Boardwalk, everybody has fun here. Take this amazing tour to discover the best attractions along the beaches of Santa Cruz.
How it works: Download the app "GPSmyCity: Walks in 1K+ Cities" from iTunes App Store or Google Play to your mobile phone or tablet. The app turns your mobile device into a personal tour guide and its built-in GPS navigation functions guide you from one tour stop to next. The app works offline, so no data plan is needed when traveling abroad.

Image by Latha B on Flickr under Creative Commons License.
Sight description based on wikipedia
2

Located on the famous Santa Cruz Beach Boardwalk, this center provides entertainment for family, friends and kids. Historically, the building was the location of the Water Carnival and had a huge indoor pool, but in 1963 it was transformed into a mini golf course. The upstairs Captain's Game Deck is loaded with pool tables, hockey, arcade games, snacks, foosball and cold beer, and downstairs is the place for video games and pinball machines. If you are just a tourist of Santa Cruz, make sure to go upstairs and visit the gallery with old pictures and displays of what Neptune's used to be.
Image by wonderyort on Flickr under Creative Commons License.
3

Located on the left side of the entrance to the Santa Cruz Wharf, the Ideal Bar and Grill is ideal through its inside and outside dining and its great views of Monterey Bay, West Cliff and the Boardwalk. Ideal also has an espresso bar, restaurant and cafe where you can enjoy cappuccino, fresh croissants or even Mexican food. They have everything and the food style is American with a Hawaiian twist. It is a great place to meet out of town for a drink, outstanding food, low prices, excellent customer service and beautiful views of the beach and boardwalk; keeps you feeling warm and safe.
Image by Floyd Jasinski on Flickr under Creative Commons License.
5

Built in 1914, the Santa Cruz Wharf is famous for its restaurants, gift shops, fishing, dining and boat tours that cater mostly to tourists. The scenic Santa Cruz wharf is the best place for enjoying events and the most popular attraction is the seals. Rent a fishing pole, learn to surf, sail, visit the local artist shop or just enjoy shopping at many boutiques and fresh fish markets. They can also arrange for pier fishing and whale watching from the wharf. Santa Cruz Wharf is the best seal viewing area and the best place to enjoy seafood while taking in the ocean view.
Image by mariko on Flickr under Creative Commons License.
Sight description based on wikipedia
6

6) The Surfer Statue (must see)

Located not far from Surfing Museum, the Surfer Statue represents a surfer with a surf board behind it; it is a famous location in this town consecrated to all the surfers from California. The memorial represents the surfing spirit of the town and the protected Monterey Bay shelter. The iron statue is a great spot for locals and tourists to watch top surfers catching waves. Definitely one of the best attractions for those who seek adventure.
Image by Marc_Smith on Flickr under Creative Commons License.
7

The Santa Cruz Surfing Museum is a museum which documents the history of surfing, with collections dating back to the earliest years of surfing on mainland United States. Located in the Mark Abbott Memorial Lighthouse at Lighthouse Point on West Cliff Drive, the Santa Cruz Surfing Museum opened its doors in June 1986 as the first surfing museum in the world. The lighthouse was built in 1967 as a memorial to surfer Mark Abott, who died while surfing at the nearby Pleasure Point surf break.

Introduced in 1885 by three Hawaiian princes who surfed the mouth of the San Lorenzo River on plank boards, surfing has permeated every facet of the Santa Cruz community. A plaque was dedicated to the princes: David Kawānanakoa, and Jonah Kūhiō Kalanianaʻole in April 2010.

Examples of surfboards from each era are on display, from the huge hollow paddle boards and redwood planks made and ridden in the 1930s and 1940s to examples of early foam and fiberglass boards, and speedy short boards used to create radical new surf moves beginning in the 1970s.

The museum contains the current Santa Cruz Light, marking Point Santa Cruz on the west side of Santa Cruz Harbor. The light was allocated funding by congress in 1852, but disputes over the owner of the land meant that construction did not proceed until 1868.

Located along West Cliff Drive, Lighthouse Beach is home to California's first surfing museum and a wonderful spot for our tour; it is relaxing and fun. Being a protected beach, it is a good region for those who love lakes and it has amazing landscapes for your viewing happiness as well as great spots to watch crazy surfers. This area is popular for tourists and locals because of the beautiful birds, Monarch butterflies and a spot for "Caroling Under the Stars," organized each Christmas. Lighthouse Field State Beach is splendid enough to spend your vacation here.
Image by Yogma on Flickr under Creative Commons License.