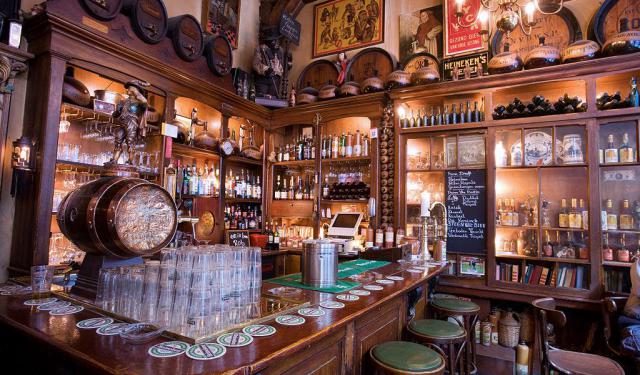 Image by saigneurdeguerre on Flickr under Creative Commons License.

Beer is an important part of Germany's culture. German beer is considered among the best beer in the world due to the German Beer Purity Law, which says that the only ingredients that can be used for producing beer are water, hops and barley. In Germany there is a wide variety of beer specialties. One of them, Kolsch beer, is brewed in Cologne. Take this tour to visit the most popular beerhouses in Cologne.
How it works: Download the app "GPSmyCity: Walks in 1K+ Cities" from iTunes App Store or Google Play to your mobile phone or tablet. The app turns your mobile device into a personal tour guide and its built-in GPS navigation functions guide you from one tour stop to next. The app works offline, so no data plan is needed when traveling abroad.

Situated on the north side of the famous Cologne Cathedral, Gaffel am Dom is one of the most popular breweries and it sells Gaffel Kolsch beer. The brewery also sells a large variety of German sausages. Gaffel am Dom boasts with a cozy design, which in 2008 was renovated to its original appearance.
Image by TKSCHD on Flickr under Creative Commons License.
2

Founded by Peter Josef Früh over 100 years ago, the Fruh Brauhaus is considered one of the best breweries in Cologne. The Fruh Brauhaus also boasts a large diversity of dishes, prepared especially to be served with beer. The brewery's Kolsch lets you discover the art of traditional brewing and serving beer.
Image by Pat Scullion on Flickr under Creative Commons License.
3

The Sion Brauhaus is one of Cologne's most popular beerhouses. As a traditional brewery of Cologne, the Sion Brauhaus serves Kolsch beer. The place is a comfortable one with 600 seats and a terrace. The beerhouse also hosts conferences and meetings of different types.
Image by abrocke on Flickr under Creative Commons License.
4

Peters Brauhaus is one of the remaining breweries still producing Kolsch in Cologne. The beerhouse is a large one, with rooms of different sizes and shapes, tables which are pine-topped, and walls decorated with beer-related panels. The beerhouse moves the beer quickly enough so that it can be served cold at their terrace too.
Image by Stephen J. Mason on Flickr under Creative Commons License.
5

Sunner im Walfisch is a cozy brewery located not far from the Pfaffen brewery. The place offers a large variety of Cologne specialties and of course the German Kolsch. The Sunner im Walfisch has an impressive design, due to its high ceiling, which creates a pleasant ambiance.
Image by Matthew Black on Flickr under Creative Commons License.
6

Opened 150 years ago, Brewery zur Malzmühle is one of the oldest brewhouses of Cologne. The beerhouse is popular for its Mühlen Kölsch and also for the art of handmade brewing, which today is still practiced. The brewery has also a shop in its building, which sells bottles, crates and kegs of Mühlen Kölsch.
Image by davehoutx1 on Flickr under Creative Commons License.

The Museums of Cologne

Cologne is an important city in Germany with French influence that makes it a major cultural center in the entire Central Europe. It is the home of more than 30 museums and hundreds of galleries. Exhibitions vary from ancient Roman archaeology to modern graphics and sculpture.