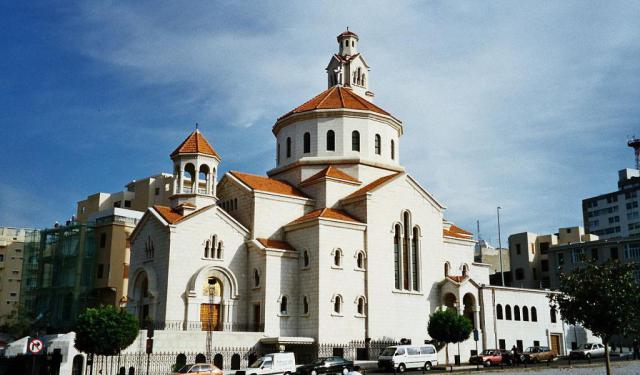 Image by Jari Kurittu on Wikimedia under Creative Commons License.

Beirut is a city of diverse religions; Christians and Muslims are both present. Churches and mosques are some of the major attractions of Beirut due to their architectural beauty, magnificent designs and historical significance. Most of these places of worship were damaged during the Civil War, but were restored and re-opened in 2000. Make sure to discover these beautiful spiritual places, whilst in Beirut.
How it works: Download the app "GPSmyCity: Walks in 1K+ Cities" from iTunes App Store or Google Play to your mobile phone or tablet. The app turns your mobile device into a personal tour guide and its built-in GPS navigation functions guide you from one tour stop to next. The app works offline, so no data plan is needed when traveling abroad.

The National Evangelical Church of Beirut (NEC) is the first native Arabic Protestant congregation in the Middle East. Established in the Lebanese capital in 1848 by Congregational and Presbyterian American missionaries, the NEC is the oldest and the largest of nine congregations situated outside Beirut. In 1870, the first Evangelical Church was built to house the Arabic and English speaking congregations. During the next hundred years, the church was the center for all the activities and celebrations of both communities. Then, during the Lebanese Civil War (1975-1990), it was totally destroyed except for the bell tower and its congregation consequently dispersed. Since its reconstruction in 1998, the National Evangelical Church of Beirut is standing once again in the heart of Beirut's Central District, re-gathering its parishioners into its fold, with its prayer services presided over by Rev. Dr. Habib Badr, as well as with its many socio-cultural and educational activities.
Image by Pascal Zoghbi on Wikimedia under Creative Commons License.
Sight description based on wikipedia
2

The Maghen Abraham Synagogue is the oldest synagogue in Beirut. Located in the former Jewish district of Wadi Abu Jamil it was abandoned after Israeli shelling destroyed the synagogue during the Lebanese Civil War.

The synagogue was abandoned after Israeli shells hit the building, leaving rubble and debris strewn across the floor. Two marble tablets representing the Ten Commandments and a marble Star of David were also shattered.

Emir Munzer Mosque (also known as An-Naoufara Mosque) was built by Emir Mounzer Ibn Suleiman Al-Tanoukhi in the year 1620. There are eight Roman granite columns in its yard. The architectural style is traditional Lebanese, even though it was constructed during the Ottoman period.
Image by Daniel Lakey on Flickr under Creative Commons License.
4

The Al-Omari Mosque used to be the Crusader Cathedral. It was turned into a Mosque by the Mamlukes in the year 1291. People from all over the world come to visit this beautiful Mosque. Though damaged during the Civil War, the building was later restored and re-opened.
Image by Aboluay on Wikimedia under Creative Commons License.
5

It is located opposite the Municipal Building in Beirut. The Mosque was built by Emir Mansour Assaf (1572-1580) at the site of a Byzantine Church of Holy Savior. Emir Assaf Mosque survived the Civil War. It is a popular local attraction and landmark.
Image by Aouni Tahech on Flickr under Creative Commons License.
6

St Elias Greek Catholic Church was built in 1863. It is one of the major attractions of the city of Beirut. The church has a fascinating interior design. Its main attraction is the marble iconostasis. The architecture is neo-classical.
Image by FredMikeRudy on Flickr under Creative Commons License.
7

The Orthodox Cathedral was built in 1767, which makes it the oldest working church in Beirut. The Cathedral suffered during the Civil War like other churches did; the wall decorations were lost. It was restored and re-opened in 2000. The church boasts of an ancient gilded icon of Saint George, which is one of the reasons why so many pilgrims from different confessions come here.
Image by Vladanr on Wikimedia under Creative Commons License.
8

8) The Maronite Cathedral of Saint George

Saint George Maronite Cathedral is the cathedral of the Maronite Archdiocese. Its construction, with a Neoclassical facade, interior and plan inspired by the Basilica di Santa Maria Maggiore, began in 1884 and ended in 1894.

The cathedral was heavily hit and shelled during the Lebanese civil war and was plundered and defaced. A number of works of art that were looted have since been recovered, including the famous painting by Delacroix representing Saint George, the patron saint of the cathedral and of the Archdiocese of the city of Beirut.

The cathedral was restored after the end of the hostilities and was re-inaugurated by the Maronite Patriarch Nasrallah Boutros Sfeir on 24 April 2000.

Image by indalo under Creative Commons License.
Sight description based on wikipedia
9

The Mohammad Al-Amin Mosque is a Sunni mosque located in Martyrs' Square in downtown Beirut. It was built between 2002 and 2007 by late Lebanese Prime Minister Rafik Hariri, who is buried in its cemetery. It was inaugurated by his son Saad Hariri on October 17, 2008. According to architect, Azmi Fakhuri, the blue-domed mosque is of Ottoman inspiration, copying the Sultan Ahmed Mosque in Istanbul. Beirut is the most religiously diverse city of Lebanon and in all of the Middle East, with Christians and Muslims both having a significant presence.
Image by indalo under Creative Commons License.
Sight description based on wikipedia
10

St Joseph Church is located on Gourand street in Beirut. It was built as a Franciscan convent in the late nineteenth century. The church is a great example of traditional Lebanese architecture. There is a beautiful Crucifix of S. Damiano Assisi inside the church.
Image by Daniel Lakey on Flickr under Creative Commons License.