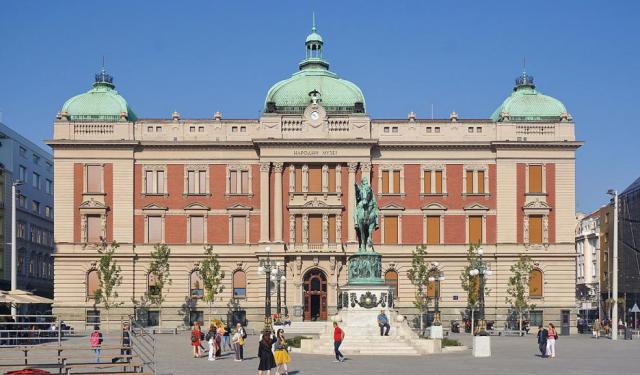 Image by Simon Legner on Wikimedia under Creative Commons License.

The number of Belgrade museums has gradually increased so that today there is truly a variety of spots with expositions for everyone's taste. A very nice museum that may be of a particular interest to you is the military museum. Equally fascinating could be the ethnographic museum established in 1901. We also suggest stopping at the Nikola Tesla Museum and Narodni Muzej (National Museum). Here is a list of museums you may want to visit on your trip to Belgrade.
How it works: Download the app "GPSmyCity: Walks in 1K+ Cities" from iTunes App Store or Google Play to your mobile phone or tablet. The app turns your mobile device into a personal tour guide and its built-in GPS navigation functions guide you from one tour stop to next. The app works offline, so no data plan is needed when traveling abroad.

The Military Museum (Serbian: Vojni Muzej) in Belgrade was founded in 1878. The museum has over 3000 ancient and modern items. These include Roman swords and helmets, Greek helmets and daggers, Serbian heavy knight's armor, axes, shields, helmets, crossbows, armored gloves, as well as Western medieval weapons. There are also more modern guns, firearms, and elements of soldier's uniforms and equipment. Dioramas, plaques, and displays illustrate the use and historical context of the museum's collection. Recent exhibits address NATO actions against Serbia in the 1990's, including the use of cluster bombs, depleted uranium, and graphite bombs, some of which may have violated international law. A well-known exhibit features parts of a US F-117 stealth aircraft which was downed by Serbian anti-aircraft gunners.

Image by Miroslav Cika on Wikimedia under Creative Commons License.
Sight description based on wikipedia
2

The Museum of Pedagogy is the one of a kind museum in Serbia and the Balkans, set to preserve from oblivion the historic ideals of Serbian culture. Established back in 1896, it has since accumulated and maintained teaching aids. The museum is entirely dedicated to basic school education and covers major pedagogical and historical aspects related to schooling and teaching.
Image by Milica Buha on Wikimedia under Creative Commons License.
3

The Ethnographic Museum of Belgrade is housed in a building constructed in 1934, which it has occupied since 1951. The museum documents and preserves artifacts related to the Serbian and Yugoslavian ethnography, such as folk dresses, textiles, carpets, and handwork tools. Among other facilities, the museum has a library and a foyer for themed meetings and artistic events. Back in the early 20th century, the museum held many exhibitions in various European countries.

Image by BoskoM on Wikimedia under Creative Commons License.
4

4) Museum of Vuk and Dositej

The Museum of Vuk and Dositej is one of the most important memorial museums in Belgrade. Founded in 1949, it documents the life, work and legacy of Vuk Stefanović Karadžić (1787–1864), the reformer of the Serbian language, and Dositej Obradović (1742–1811), a writer who was the country's first Minister of Education. The museum provides insight into Serbian culture and, in particular, its revival at the time of the First Uprising against the Ottoman Empire. Since 1979, the museum has been governed by the National Museum of Serbia.

Image by Lumen roma on Wikimedia under Creative Commons License.
Sight description based on wikipedia
5

The National Museum is the largest and oldest museum in Serbia. The museum was established on May 10, 1844. Since it was founded, its collection has grown to over 400,000 objects, including many foreign masterpieces. Currently, the museum is closed for renovation.

The National Museum building was declared a Monument of Culture of Great Importance in 1979.

On January 25, 2012, after ten years of the National Museum of Serbia being closed to the public, Vladimir Bogdanović of the leading Serbian newspaper/website Press wrote an article called A decade of cultural genocide against the Serbs, commenting on the need and importance of a working national museum.

The Nikola Tesla Museum is a scientific museum, one of its kind in terms of preserving the heritage of Nikola Tesla, the world's famous inventor. Its permanent exhibition was arranged in 1955. From time to time there have been some modifications, but the basic concept of it has remained the same. Alongside a memorial exhibition documenting Tesla's life, the museum offers an interactive display with 3D models of Tesla's inventions. Periodically, there are themed exhibitions of documents, photographs and other materials, outlining certain periods of Tesla's work and life.

Operation hours: Tuesday - Sunday: 9:45 am - 8 pm.
Image by LukaP on Wikimedia under Creative Commons License.
Sight description based on wikipedia
7

The Museum of Natural History (Serbian: Prirodnjački Muzej) was founded on 19 December 1895, and is one of Serbia's oldest specialized scientific institutions. It holds nearly 900,000 items presented in various collections: mineral, rock, hunting trophy, paleontological, zoological and botanical. The museum publishes its own bulletin, "Glasnik", and contains a library, founded in 1903, with over 20,000 books and printed documents. The museum's gallery is at Mali Kalemegdan 1, which is part of the Kalemegdan district of Belgrade, while the museum itself is located on Njegoševa Street.

Operation hours: Tuesday - Sunday: 10 am - 6 pm.
Image by Boksi on Wikimedia under Creative Commons License.
Sight description based on wikipedia