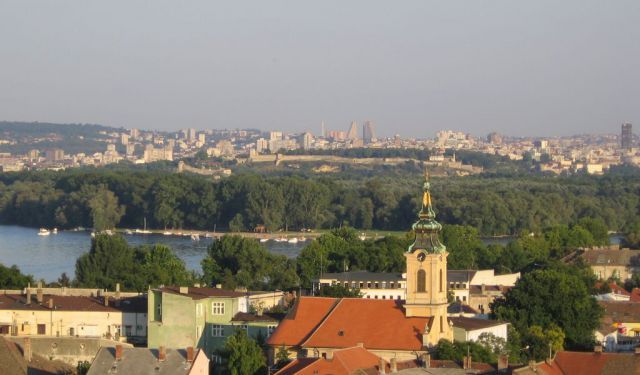 Image by Amazonite on Wikimedia under Creative Commons License.

Multi-confessional in reality, Belgrade is very Eastern Orthodox by tradition, which is seen in the many Christian temples and churches found in the city. The most notable of them are the Temple of St. Sava, St. Mark's Church, Sveta Ružica, and the Church of St. Archangel Michael. Whether a worshiper or a tourist, follow this tour to explore the Christian sights of Belgrade.
How it works: Download the app "GPSmyCity: Walks in 1K+ Cities" from iTunes App Store or Google Play to your mobile phone or tablet. The app turns your mobile device into a personal tour guide and its built-in GPS navigation functions guide you from one tour stop to next. The app works offline, so no data plan is needed when traveling abroad.

The Ružica (Rose) Church is enclosed within the Kalemegdan Fortress. A church of the same name occupied this site at the time of Stefan Lazarević, and was demolished in 1521 by the invading Turks. The current church's building housed a gunpowder shop in the 18th century, and was then converted into a military church some time between 1867 and 1869. Badly damaged during the First World War, the church was renovated in 1925. Its iconostasis was carved by Kosta Todorović; the icons were painted by Rafailo Momčilović. The church's walls are adorned with paintings by Russian artist Andrej Bicenko.
Image by Tadija on Wikimedia under Creative Commons License.
Sight description based on wikipedia
2

This cathedral church was built between 1837 and 1840 by order of Prince Miloš Obrenović, to the design of Adam Friedrich Kwerfeld, a builder from Pančevo. Featuring the style of classicism with late Baroque elements, the church boasts richly decorated interior with the gold-plated carved iconostasis, created by sculptor Dimitrije Petrović. All the icons on its iconostasis, thrones, choirs and pulpits, as well as those on the walls and arches were painted by Dimitrije Avramović, one of the most distinguished Serbian painters of the 19th century. As a special value, the church holds the relics of Serbian Saints - King Uroš and Despot Stefan Štiljanović, as well as the heads of Serbian rulers from the Obrenović dynasty (Miloš, Mihailo and Milan).
Image by Ulrich Latzenhofer on Wikimedia under Creative Commons License.
Sight description based on wikipedia
3

The Serbian Orthodox Church, founded by the Archbishop Saint Sava, was recognized as autocephalous by Constantinople in 1219. The status of the Serbian Orthodox Church grew along with the growth in size and prestige of the medieval Kingdom of Serbia. After King Stefan Dušan assumed the imperial title of tsar, the Archbishopric of Peć was correspondingly raised to the rank of Patriarchate in 1346. In the century that followed, the Serbian Church achieved its greatest power and prestige. In the 14th century Serbian Orthodox clergy had the title of Protos at Mount Athos. In 1459, the Ottoman Empire conquered Serbia and made much of the former kingdom a "pashaluk". Although some Serbs converted to Islam, most of them retained their adherence to the Serbian Orthodox Church. The Church itself continued to exist throughout the Ottoman period, though not without some disruption. After the death of Patriarch Arsenios II in 1463, a successor was not elected.
Image by Djordje Stakić on Wikimedia under Creative Commons License.
Sight description based on wikipedia
4

4) Church of Alexander of Neva

The original church of Alexander of Neva (the Russian Saint Alexander Nevsky) in Belgrade was built in 1877. It served until 1891, upon which was expanded. The construction plan was masterminded by architect Elizabeth Nacic. World War I postponed the work, so it was completed only in 1928-29. The new church marble iconostasis was a gift from King Alexander of Serbia in 1930. The icons were painted the same year by a Russian painter.
Image by Lumen roma on Wikimedia under Creative Commons License.
5

The Church of Holy Apostle and Evangelist Mark, otherwise known as St. Mark's Church, is located in the center of Belgrade in Tašmajdan Park. It is one of the largest churches in the country. It was built between the two world wars, 1931-1940, and its interior is still not fully completed. A Christian place of worship has existed continuously in what is today Tašmajdan Park from at least the nineteenth century. The original St. Mark's Church, built in the days of Belgrade Metropolitan Petar Jovanović (1833-1859) and Prince Miloš Obrenović (1835-1836), stood in almost the same location, just slightly south of the present building. At a time when Turkish troops were still quartered in the city and the present-day Orthodox Cathedral (Saborna Crkva) was built of wood, this was a great spiritual sight for Belgrade. The patron endower of the church was Lazar Panća, a merchant originally from the village of Katranica in Southern Serbia, who died in Belgrade in 1831.
Image by Ranko on Wikimedia under Creative Commons License.
Sight description based on wikipedia
6

6) Cathedral of Saint Sava (must see)

The Cathedral of Saint Sava (Serbian: Hram Svetog Save) is an Orthodox church in Belgrade and the largest Orthodox church building in the world. It is dedicated to Saint Sava, the founder of the Serbian Orthodox Church and an important figure in medieval Serbia. It is built on the Vračar plateau, the location where Sava's remains are thought to have been burned in 1595 by the Ottoman Empire's Sinan Pasha. From its location, the cathedral dominates Belgrade's cityscape, and is perhaps the most monumental structure in the city. It was built exclusively by public subscription. Standing nearby is the parish home, as soon will be the planned patriarchal building. Saint Sava's is not a cathedral in an ecclesiastical sense, as it is not the seat of a bishop (the seat of the Metropolitan Bishop of Belgrade is St. Michael's Cathedral).
Image by PetarM on Wikimedia under Creative Commons License.
Sight description based on wikipedia