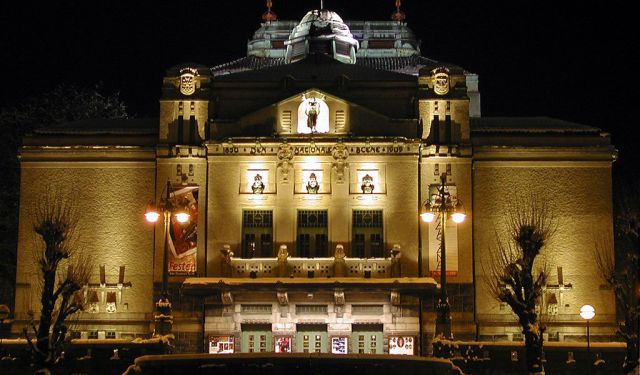 Image by Svein-Magne Tunli on Wikimedia under Creative Commons License.

Bergen is a city with an old rich culture. It has plenty of venues like theatres, cinemas, museums, galleries, concert halls and others. Music and art are popular here and the city has a vivid cultural scene. Take this walking tour to learn more about Bergen'a culture.
How it works: Download the app "GPSmyCity: Walks in 1K+ Cities" from iTunes App Store or Google Play to your mobile phone or tablet. The app turns your mobile device into a personal tour guide and its built-in GPS navigation functions guide you from one tour stop to next. The app works offline, so no data plan is needed when traveling abroad.

The Bergen International Culture Center is part of the Bergen Kommune Culture Department. It was inaugurated in 1993 and is located in the center of the city. The center's purpose is to raise the public awareness of the rich local ethnic background. About 70 organizations maintain ties with this cultural center.
Image by Joongi Kim on Flickr under Creative Commons License.
2

The Grieg Hall is a 1,500 seat concert hall in Bergen. It has been the home of the Bergen Philharmonic Orchestra since the hall's completion in 1978. It hosted the Eurovision Song Contest in 1986, and is the host of the annual Norwegian Brass Band Championship competition, which is held in mid-winter. The hall is named after Bergen-born composer Edvard Grieg, who was a music director of the Bergen Philharmonic Orchestra from 1880 until 1882. The Grieg Hall recording studio is also famous within the black metal community, as several of the most important Norwegian black metal albums were recorded there, with Pytten as sound technician.
Image by Nina Aldin Thune on Wikimedia under Creative Commons License.
Sight description based on wikipedia
3

Det Akademiske Kvarter is a student house in Bergen. The house is run by about 400 volunteer students. Kvarteret hosts a huge number of happenings each year, ranging from juggling shows to concerts. In addition to hosting cultural events, it offers volunteers experience as sound technicians, bartenders, photographers and system administrators, to mention just a few. The students who work here primarily come from the University of Bergen, but also from Norges Handelshøyskole and Høgskolen i Bergen. Kvarteret just opened after a 3-year closure while expanding.
Image by Torstein Aldin Thune on Wikimedia under Creative Commons License.
Sight description based on wikipedia
4

Bergen Cinema is located close to the center of the city. It consists of two buildings situated near each other - Magnus Barfot and Konsertpaleet. Films here are run in their original language with Norwegian subtitles. The cinema complex has 13 screens.
Image by Svein Sveinsson on Flickr under Creative Commons License.
5

BIT Teatergarasjen (BIT) are a producer and co-producer of international contemporary theatre and dance in Norway. They emphasize projects that stimulate international co-production and co-operations between different fields of art. BIT was established as a festival in 1983/-84, and changed into an all-year theatre in 1990. The program consists approximately of 50% theatre productions and 50% dance productions. BIT is one of the main producers and co-producers of international contemporary theatre and dance in Norway. BIT co-operates with theatres and producers in several European countries. It has no artistic crew employed, but works mostly with established companies. BIT's artistic director is Sven Birkeland and its managing director is Mette Helgesen.
Image by Harms-no on Wikimedia under Creative Commons License.
Sight description based on wikipedia