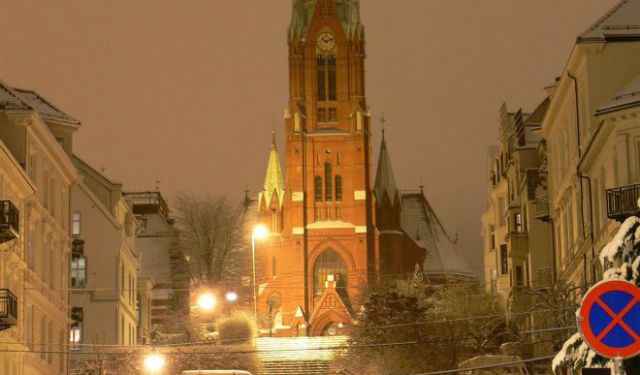 Image by Georgi Genov on Wikimedia under Creative Commons License.

Over the centuries of Bergen's existence, many places of worship have been built here to meet the requirements of the continuously growing religious population. Some of the churches are as old as the city itself, and date back to the 11th century, thus representing true architectural and spiritual heritage.
How it works: Download the app "GPSmyCity: Walks in 1K+ Cities" from iTunes App Store or Google Play to your mobile phone or tablet. The app turns your mobile device into a personal tour guide and its built-in GPS navigation functions guide you from one tour stop to next. The app works offline, so no data plan is needed when traveling abroad.

St Mary's Church is the only remaining of the twelve churches and three monasteries built in Bergen between its foundation during the reign of Olav Kyrre (1066–93, traditionally 1070) and the end of the twelfth century. St Mary's Church is likely to have been built by craftsmen from Scania, then part of Denmark. The church's style is remiscient of that of Lund Cathedral in Scania. St Mary's Church is a two-towered, three-naved, mainly Romanesque style church. The eastern part of the choir shows some Gothic influence reminiscent of the Haakon's Hall, likely caused by the reconstruction after the 1248 fire. The church is constructed mainly in soapstone, the oldest parts being built of the highest quality soapstone. Shale is used sporadically. At least three different types of soapstone is used, and it is likely that the stone comes from several different quarries in the district.
Image by Morten Dreier on Wikimedia under Creative Commons License.
2

Korskirken is a cruciform church in Bergen. Located close to the Fish Market, it dates back to the second half of the 12th century. The church originally had two towers, one of which was destroyed by fire in the 16th century and was never rebuilt.
Image by Nina Aldin Thune on Wikimedia under Creative Commons License.
3

Bergen Cathedral is the seat of the Diocese of Bjørgvin. Located in the city centre of Bergen, the first recorded reference to it is dated 1181. After the fires of 1623 and 1640, Bergen Cathedral received its current general appearance. The steeple on the nave was torn down, and the current tower was built. During the renovation in the 1880s by architect Christian Christie, the Rococo interior was replaced to give the interiors back their former medieval appearance. A cannonball from the 1665 Battle of Vågen between the English and Dutch fleets remains embedded in the cathedral's exterior wall.
Image by Morten Dreier on Wikimedia under Creative Commons License.
4

Nonneseter is a former abbey in Bergen. The building dates back to the 12th century, and has been partially destroyed by fires. The most important structure on the site that has survived many disasters is the Nonneseter Chapel. It features a truly impressive architectural design.
Image by Nina Aldin Thune on Wikimedia under Creative Commons License.
5

St. Paul's is a Catholic church in Bergen. Its construction started in the 19th century but moved on very slowly due to financial problems. At the beginning of the 20th century the building housed a hospital, which was then shut down. Today the church is a place of worship for the many Catholics of Bergen; it also houses a school.
Image by Sveter on Wikimedia under Creative Commons License.
6

St John's was built in the second half of the 19th century. It is the largest church in the city. The church is cruciform and was built in Gothic Revival Style. Its tower stands 61 meters tall, making it the highest in Bergen.
Image by Sveter on Wikimedia under Creative Commons License.
7

Nykirken is an old cruciform church in Bergen. It was built in the 17th century but had to be reconstructed several times because of fire damage. The latest reconstruction happened in the second half of the 20th century, following the destruction in World War II. During that reconstruction the church acquired a spire.
Image by Mortendreier on Wikimedia under Creative Commons License.