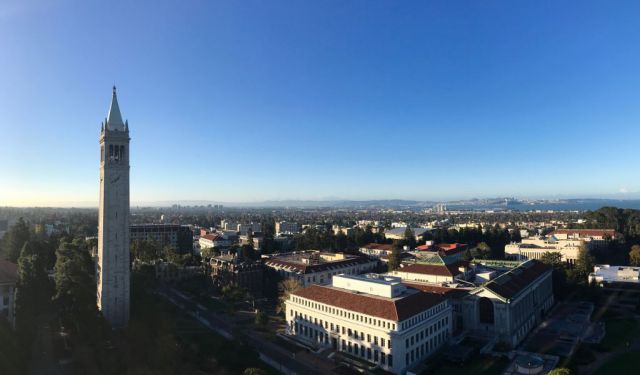 Image by Zpwilliams on Wikimedia under Creative Commons License.

Berkeley is renowned for a number of listed historic sights; among them churches, private homes, public buildings and other historically important edifices reflecting the town's architectural beauty. Primarily, though, the town is famous for being home to the University of California, Berkeley Campus. As a student place, it also abounds in restaurants, bookstores and clothing shops, not to mention numerous street vendors occupying the sidewalks of Telegraph Avenue, Berkeley's major thoroughfare.
How it works: Download the app "GPSmyCity: Walks in 1K+ Cities" from iTunes App Store or Google Play to your mobile phone or tablet. The app turns your mobile device into a personal tour guide and its built-in GPS navigation functions guide you from one tour stop to next. The app works offline, so no data plan is needed when traveling abroad.

Completed in 1909, the Old City Hall has a long history. Designed by Bakewell and Brown in a French Renaissance style, it is one of Berkeley's eight official city landmarks and is also listed in the National Register of Historic Places.
Image by Sanfranman59 on Wikimedia under Creative Commons License.
2

Berkeley Community Theater is a theater located in Berkeley, California, on the campus of Berkeley High School. The theater is used by Berkeley High School and the Berkeley Unified School District. The theater building also holds the Florence Schwimley Little Theater, a smaller theater that is often used for Berkeley High School music and theater performances. The Art Deco-style theater has 3,491 seats, including a balcony section. A large stage is extended by an orchestra pit that can be raised or lowered.
Image by Daniella Thompson on Wikimedia under Creative Commons License.
Sight description based on wikipedia
3

The Tupper and Reed Building was erected in 1906 to house John Tupper and Lawrence Reed's music store. Located on Shattuck Ave, this building was designed by William Raymond Yelland in his storybook house style. Built from brick and wood, it features balconies, a fireplace, impressive adornments and an iron cutout of this landmark building’s name.
Image by Sanfranman59 on Wikimedia under Creative Commons License.
4

St. Mark's Episcopal Church, designed by the founder of Burton Architecture David Burton, was established in 1877. A significant part of the Berkeley community, its design and warm colors make it a pleasant place to visit and an outstanding landmark.
Image by uzvards on Flickr under Creative Commons License.
5

Telegraph Avenue is a street that begins, at its southernmost point, in the midst of the historic downtown district of Oakland, California, United States, and ends, at its northernmost point, at the southern edge of the University of California campus in Berkeley, California. It is approximately 4.5 miles (7 km) in length. Among some Berkeley residents, especially University of California students, Telegraph refers mainly to a four-block section just south of the university, from Bancroft Way (which borders the campus) to Dwight Way. As a center of campus and community life, this section of Telegraph Avenue is home to many restaurants, bookstores, and clothing shops, along with street vendors occupying its wide sidewalks. Here Telegraph Avenue attracts a diverse audience of visitors, including college students, tourists, artists, street punks, eccentrics, and the homeless.
Image by BrokenSphere on Wikimedia under Creative Commons License.
Sight description based on wikipedia
6

Sather Gate is a prominent landmark separating Sproul Plaza from the bridge over Strawberry Creek, leading to the center of the University of California, Berkeley campus.

The gate was donated by Jane K. Sather, a benefactor of the university, in memory of her late husband Peder Sather, a trustee of the College of California, which later became the University of California. It is California Historical Landmark and in the National Register of Historic Places.

Originally, the gate served as the terminus of Telegraph Avenue, and marked the University's south entrance. (The circle in front of the gate served as a turning point for the trolleys coming from Oakland.) The University later expanded further south of Strawberry Creek, and the gate is now well separated from Berkeley's city streets by Sproul Plaza.

Image by Falcorian on Wikimedia under Creative Commons License.
Sight description based on wikipedia
7

Wheeler Hall is a building on the campus of the University of California. Home to the English department, it was named for the philologist and university president Benjamin Ide Wheeler.

The building was opened in 1917. It houses the largest lecture hall on the Berkeley campus.

The building was the site of many of the Free Speech Movement protests in the 1960s and is a focal point of the Berkeley campus. In recent history, it has been the place for many university protests and the subject of several building takeovers.

South Hall, built in 1873, is the oldest building on the University of California, Berkeley campus and the only remaining building of the original campus. South Hall was originally the counterpart of North Hall, which no longer exists, but was located where the Bancroft Library currently stands.

The first physics laboratory in the United States was hosted in South Hall in 1879. It also has been home to the College of Agriculture, a business school, and a temporary museum for the state geological survey. The University Herbarium was housed in South Hall from 1890 till 1897. It currently houses the UC Berkeley School of Information. When Wheeler Hall was planned, the entrance of South Hall was removed from the west side and added on the east side entrance.

According to legend, the rooftop scene of Mary Poppins was filmed at South Hall, although this has been shown to be false.

Campus tour guides often point out a small stone bear in the architecture of South Hall, above the entrance, in the third circle from the left, claiming it is the smallest bear statue on campus.

Sather Tower is a campanile (bell and clock tower) on the University of California, Berkeley campus. It is more commonly known as The Campanile due to its resemblance to the Campanile di San Marco in Venice, and serves as UC Berkeley's most recognizable symbol.

It was completed in 1914 and first opened to the public in 1917. The tower stands 307 feet (93.6 m) tall, making it the third tallest bell and clock-tower in the world. It was designed by John Galen Howard, founder of the College of Environmental Design, and it marks a secondary axis in his original Beaux-Arts campus plan. Since then, it has been a major point of orientation in almost every campus master plan. The tower has seven floors, with an observation deck on the eighth floor. Some floors are used to store fossils.

Memorial Glade is a green space located at the core of the university campus. It is home to a variety of trees, including a grove of trident maples. Memorial Glade is a popular place for students to relax between classes and offers a great view of many other campus landmarks.
Image by Gku on Wikimedia under Creative Commons License.
11

11) University of California Museum of Paleontology (must see)

The museum is within the Valley Life Sciences Building (VLSB), designed by Arthur Brown Jr. Its collections are primarily intended for research and are thus not accessible to the public. A limited number of fossils from the collection is on display in the VLSB. Although located on the Berkeley campus, the museum is the primary locality for storing fossils collected statewide. The original fossils, around which the current collection has grown, were those gathered as part of the California Geological Survey from 1860-1867.

Eucalyptus Grove contains the tallest of these hardwood trees in North America. Planted in 1882, in California they actually grow healthier than in Australia, their native location. The grove has been a significant part of the university’s landscape heritage, adding a refreshing fragrance to the air.
Image by John-Morgan on Flickr under Creative Commons License.
13

Wellman Hall, located between Giannini and Hilgard Halls, was built in a Classical Revival style. This hall is distinguished by its circular entrance, which is like a tower. Its facade is made of granite, which along with all the granite on the campus, was taken from the Sierra Nevada Mountains. Serving as an agricultural hall, Wellman Hall was listed in the National Register of Historic Places in 1982.
Image by Sanfranman59 on Wikimedia under Creative Commons License.
14

Along with Giannini and Wellman Halls, Hilgard Hall is a former component of the Agriculture Trio. Built in a Classical Revival style, it is decorated with agricultural motifs such as scythes and sheaves of wheat. Its red roof tiles and soft red columnar friezes make Hilgard Hall a beautiful landmark.
Image by Sanfranman59 on Wikimedia under Creative Commons License.
15

Also known as Thornburg Village, Normandy Village is a Berkeley landmark home to unique apartment buildings designed by Jack Wood Thornburg. Its former architect was William Raymond Yelland, known for his storybook design. Erected in 1927, each building has its own history. Today, Normandy Village is designated a City of Berkeley Landmark.
Image by Ken Osborn on Flickr under Creative Commons License.