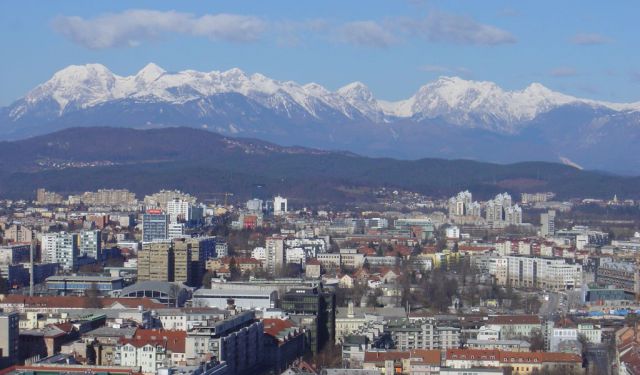 Predominantly residential, Bežigrad is a district of Ljubljana bordered by the southern rail line, the Kamnik rail line, the highway loop and Šmartinska Cesta to the east. Take this tour to observe the life of locals and explore some outstanding architectural sights off the beaten tourist track.
How it works: Download the app "GPSmyCity: Walks in 1K+ Cities" from iTunes App Store or Google Play to your mobile phone or tablet. The app turns your mobile device into a personal tour guide and its built-in GPS navigation functions guide you from one tour stop to next. The app works offline, so no data plan is needed when traveling abroad.

Navje, formerly known as St. Christopher's Cemetery, is a memorial park in Bežigrad district, right behind the Ljubljana railway station. Between the early 18th century and the 1930s, the area was used as a central cemetery of Ljubljana. In 1936, a new cemetery was established, called Žale, and most of the graves were moved there. A small portion of the old cemetery was transformed into a "pantheon" of famous Slovenians. The memorial park was designed by architects Jože Plečnik and Ivo Spinčič. After World War II, the park was largely neglected and renovation works commenced only in the 1990s.

Image by Ziga on Wikimedia under Creative Commons License.
Sight description based on wikipedia
2

The Slovenian Youth Theater was founded in Ljubljana in 1955 as the first professional theater for children and youth in Slovenia. The building hosting the theater is known as Akademski Kolegij, an unfinished work by renowned architect Plečnik.
Image by Steve Snodgrass on Flickr under Creative Commons License.
3

The Ljubljana Exhibition and Convention Center is a limited liability company which organizes domestic and international fairs, among other events, and is located in Ljubljana's Bežigrad district. The key mission of the Center is to facilitate contact between exhibitors and viewers. The building was designed by architect Ilija Arnautović and completed in 1955. Over the years, the Center has hosted various events, such as Boat Fair, Tourism and Leisure Show, Gastronomic Expo & Ice-cream Fair, Wine Fair, Automobile Show, Nature and Wellness Fair, etc.

Image by Ziga on Wikimedia under Creative Commons License.
Sight description based on wikipedia
4

The Slovenian Railway Museum is tasked with acquiring, preserving and supplying knowledge about Slovenian railway history. When the railwayman and woman of Slovenia elected to establish a museum of their own, they chose for its location the former locomotive shed at Ljubljana Siska. In its formative years, historic vehicles were temporarily displayed only in the 'roundhouse', a semicircular shed forming the centrepiece of the depot. This shed itself had been listed as part of the cultural heritage.

In 1996, the year that marked the 150th anniversary of the advent of railways in Slovenia, the Museum of the Slovenian Railways presented to the public a permanent display of its most important railway artefacts. This was housed in the former railway training school in Kurilniška Street, close by the main site of the museum. The building, however, was old and in a ruinous state. With its demolition in 2002, the display had to be closed to the public for the duration. It reopened on a newly acquired site next to the roundhouse in 2004. As before, the display introduces visitors to the main spheres of railway activity. Aided by its maps and illustrations, visitors can trace the whole development of Slovenia's railway network.

Image by Ajznponar on Wikimedia under Creative Commons License.
Sight description based on wikipedia
5

Hranilniška Ulica, or the Savings Bank Street, is one of the oldest streets in Ljubljana. Built in the 1880s, it has retained much of its architectural and historic character. The street is particularly noted for its heritage buildings.
Image by chandras on Flickr under Creative Commons License.
6

Bežigrad Gymnasium is a coeducational state secondary school for students aged between 15 and 19. Famous for its education quality and eminent alumni, the institution is regarded as one of the best grammar schools in Slovenia. It was founded in 1596 as a Jesuit educational institution and initially was located in the center of Ljubljana, the then capital of the Duchy of Carniola. Until 1889, it was the only grammar school in the city. That year, the Poljane Grammar School was founded and the old institution was renamed to "The First Gymnasium of Ljubljana". In 1936, it was moved to its current location in the Bežigrad district. It soon became known among locals as the "Bežigrad Gymnasium". In 1990, this name was officially adopted.

Bežigrad Stadium, also known as the Bežigrad Central Stadium, is a multi-purpose stadium in Ljubljana. It has been used predominantly for football matches, and is the home of NK Olimpija. The stadium was built in 1928 for the Catholic youth sport association Orel. It was designed by architect Jože Plečnik. Depeche Mode played here in 2006, followed by British metal band Iron Maiden, performed in July 2007. The stadium also hosted two notable concerts by Slovenian band Siddharta.