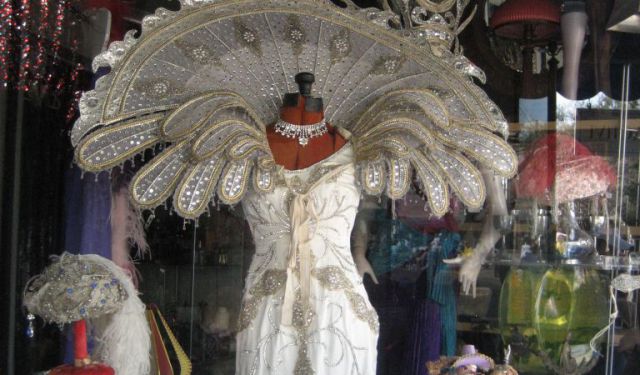 Image by Infrogmation on Wikimedia under Creative Commons License.

Among all the other activities that New Orleans has to offer, shopping is probably one of the most popular. Antiques, art, one of a kind jewelry, New Orleans has it all. This tour will take you to the biggest and most prominent shopping spots in New Orleans.
How it works: Download the app "GPSmyCity: Walks in 1K+ Cities" from iTunes App Store or Google Play to your mobile phone or tablet. The app turns your mobile device into a personal tour guide and its built-in GPS navigation functions guide you from one tour stop to next. The app works offline, so no data plan is needed when traveling abroad.

Whether you are a collector or an art enthusiast, you will definitely love the Le Mieux Galleries, as you'll find here the works of Gulf Coast artists from Louisiana to Florida. Also here you will find the masterpieces of the late New Orleans abstract artist Paul Ninas.

2) The Outlet Collection at Riverwalk (must see)

The Outlet Collection at Riverwalk, until 2014 Riverwalk Marketplace, is an outlet mall located in the Central Business District of New Orleans. It is located along the Mississippi River waterfront, stretching from the base of Canal Street, upriver to the New Orleans Morial Convention Center.

The mall closed for a few months after Hurricane Katrina, due to extensive wind and looting damage. It reopened in early December 2005, in hopes that Christmas shopping would jump-start the area's recovery. Only a small number of shops were able to open at first. Additional businesses slowly opened over the next several years, eventually bringing the mall back to near 100% occupancy.

In 2014, the mall closed temporarily and underwent renovations. It reopened in late spring 2014 as The Outlet Collection at Riverwalk, and became the nation's first downtown outlet center, with shops which include a Coach, Inc., outlet and Neiman-Marcus Last Call Studio outlet. Outside the mall is the Spanish Plaza that is a setting for frequent outdoor concerts and special events.

Why You Should Visit:
Stroll and see items while listening to street jazzz. The merchants are friendly and true NOLA characters.
They offer tables and chairs outside where you can overlook the water and see all the barges & ships coming and going! Plenty of food spots with a variety of choices.


Image by Infrogmation on Wikimedia under Creative Commons License.
3

Canal Street is a famous street in New Orleans and, at 170 feet, one of the widest in the United States. Located in the French Quarter, this street served as a cultural dividing line for the Creoles and the new American residents.

The name of the street comes from a canal, that was never built, that would connect the Mississippi River and Lake Pontchartrain. Canal Street is the starting point for many of the major avenues and streets that run through the French Quarter. It is also a location for the many parades which occur during Mardi Gras.

Canal Street was a major social spot for the locals and also a most important shopping center. Major department stores such as Karuss’s, Godchaux's, Gus Mayer, Sears, and DJ Holmes lined the streets. Today stores like Saks Fifth Avenue, Georgiou, Adrienne Vittadini, and Bananna Republic are a few of favorite shopping centers.

Although many of the old department stores are now gone, Canal Street still has many hotels, souvenir shops, and restaurants that visitors and residents enjoy. The street is still a major transportation hub. A recommend must-do is to ride one of the many streetcars that run up and down the street and to follow-up with lunch or dinner at the Canal Street Restaurant.
Image by Lyndi&Jason on Flickr under Creative Commons License.
4

Angela King Gallery represents a contemporary art gallery. Here you will find: paintings, prints, and sculptures, as well as the works of Peter Max, Ernest Trova, Leroy Neiman, M.L. Snowden, and many others.
Image by David Paul Ohmer on Flickr under Creative Commons License.
5

Once a brewery, this building is now an upscale mall filled with both local shops and national chains, along with a food court and a balcony that overlooks the Mississippi River.

The Old French Market was a major food market for 180 years in New Orleans. People came from far and wide to enjoy the delicious and fresh foods, aroma, and atmosphere. It is one of the oldest public market buildings in America. The original market was located at the Café du Monde site near Jackson Square and was constructed by the Spanish during colonial times to provide a safe and clean place to purchase food. In 1811, a new building was constructed only to be destroyed by a hurricane the next year. The current building was rebuilt in 1813 and survives to this day, albeit with several modifications.

Often called Halle des Boucheries, or the Meat Market, by the locals, the shopping center was the only place where meat could be legally be purchased. The French Market became so popular that it eventually contained a vegetable market, fruit market, a dry goods emporium, and a coffee stand. The market almost came to an end in the 1970s when the City removed most of the produce from the site. The French Market Corporation rebounded by illustrating its glorious past while opening clothing stores, gift shops, and restaurants. One of the best features of the market is the flea market that is open daily from 7 am to 7 pm where clothing, jewelry, arts, crafts, and other items are sold.

Tip:
Though it is filled with many of the usual market fare from around the world, there are local artists in this market as well, so make sure you look for them. Their wares are reasonably priced and are great souvenirs! Just make sure you bring cash as not all of the booths accept cards.

For most of the people living in New Orleans, the Central Business District is just a crowded area home to skyscrapers, malls and casinos. However the district is also home to a large number of heritage sites, including some well-known museums. The tour below takes in the cultural side of the Business District.

Dating back to the 19th century, Garden District in New Orleans is famous for its heritage mansions and cottages. Along with the heritage sites you will discover several great specialty shops. Take the tour below and discover the beauty and unique atmosphere of the Garden District.

Being a multicultural city, New Orleans provided an ideal setting for the practice of Voodoo. Some people get scared to death by the mystical rituals, others get easily tempted by the idea of achieving anything they want by the means of spells and incantations, but most are just curious to know what Voodoo is. If you'd like to find out by yourself, don't miss the chance to go on the tour...  view more