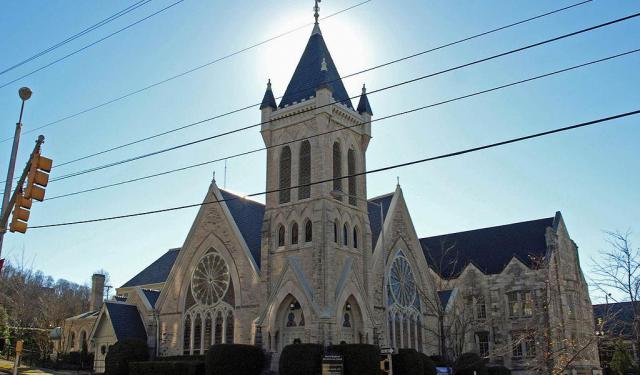 Image by Chris Pruitt on Wikimedia under Creative Commons License.

When in Birmingham, one can easily notice the “abundance” of religious venues concentrated in the very heart of the city and also in the outskirts. Churches here are of various denominations and have a varied service schedule. Besides this, churches in Birmingham are fine representations of religious architecture. Take this tour and check out the exquisite churches that brought fame to their city.
How it works: Download the app "GPSmyCity: Walks in 1K+ Cities" from iTunes App Store or Google Play to your mobile phone or tablet. The app turns your mobile device into a personal tour guide and its built-in GPS navigation functions guide you from one tour stop to next. The app works offline, so no data plan is needed when traveling abroad.

The present building, a "modified Romanesque and Byzantine design" by the prominent black architect Wallace Rayfield, was constructed in 1911 by the local black contractor T.C. Windham. The church is still in operation and is a central landmark in the Birmingham Civil Rights District. In 1993, a team of surveyors for the Historic American Buildings Survey executed measured drawings of the church for archival in the Library of Congress. It was designated as a National Historic Landmark in 2006. As part of the Birmingham Civil Rights District, Sixteenth Street Baptist Church receives more than 200,000 visitors annually.

Image by John Morse on Wikimedia under Creative Commons License.
Sight description based on wikipedia
2

The First United Methodist Church is the religious venue which, since 1872, has brought light and hope to Birmingham. The church’s membership resides not only in one community; it is a blooming organization, gathering members who live even an hour away from the church. The First United Methodist Church’s family welcomes everyone!
Image by acnatta on Flickr under Creative Commons License.
3

3) Cathedral Church of the Advent

The Cathedral Church of the Advent in Birmingham is the mother church of the Episcopal Diocese of Alabama. The parish church of the Advent was established in 1872, one year after the founding of the city of Birmingham, and was one of the first churches built in the new city. The first building on this site was completed in 1873, but was soon after destroyed by fire. The present structure, was occupied in 1883, with completion of the tower and portico in 1885.

The Cathedral is known for its historical location on Twentieth Street near Linn Park, as well as for the reputation of its music program. The Church of the Advent became a cathedral, when the Diocese of Alabama sanctioned it as its seat. A major project to preserve the sandstone exterior of the Cathedral was undertaken between 1999 and 2005. Also in 2005, the cathedral choir was named "Best Church Choir" by readers of the Birmingham News. Today, the Church of the Advent comprises nearly 4000 members, making it one of the 10 largest Episcopal churches in the United States. The current Dean of the Cathedral is the Very Reverend Frank F. Limehouse, III.

Image by Curtis Palmer on Wikimedia under Creative Commons License.
Sight description based on wikipedia
4

This stunning church, located in the very heart of the city, has an incredulous architecture, a dashing red entrance and a massive tower. Aside from being a precious landmark, it is first and foremost a church with certain goals. It is a church that seeks to bring happiness to people and show that each of us has the ability to do something good for the world in which we live.
Image by alabamahoosier on Flickr under Creative Commons License.
5

The Cathedral of St. Paul is a 19th century American Neo-Gothic structure; its foundation stone was laid in 1890 and it was completed three years later. It is a spectacular building, featuring a statue of Christ and one of Saint Paul at the entrance. This red brick structure, adorned with white limestone, forms a unique landmark of Birmingham. The church holds baptisms, marriages and funerals; one can come to confession from Monday to Friday at 11:30am.
Image by Gaagaagiw on Wikimedia under Creative Commons License.

Birmingham is a city that has quite a number of museums, specializing in different fields. Whether it is art, sports, medicine, history or music, Birmingham has it all. While visiting the city’s museums you will learn many interesting facts about personalities who left their mark on Birmingham’s history. Take the following self-guided tour and check out the city’s most outstanding museums.

Even a relatively young city, such as Alabama's Birmingham, has a lot to offer a first-time visitor in terms of history and culture. There are quite a few venues in the city - museums, galleries, etc. – fit to satisfy one's cultural eagerness and help one have a good time. Take this orientation walk and explore Birmingham's most notable attractions.