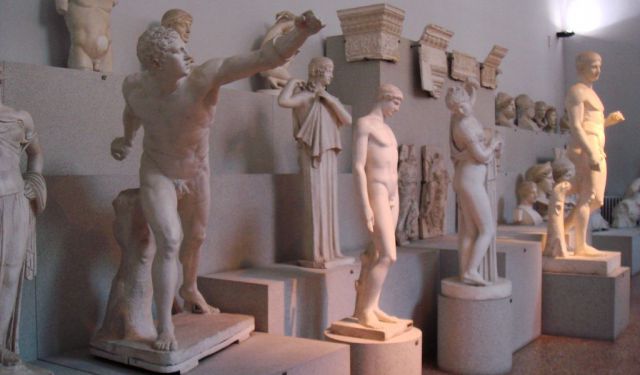 Image by Stefano Bolognini on Wikimedia under Creative Commons License.

Bologna, a very old and beautiful Italian city, offers many museums, some of them located in beautiful palaces built centuries ago. Take this self-guided tour to discover the most fascinating museums in Bologna.
How it works: Download the app "GPSmyCity: Walks in 1K+ Cities" from iTunes App Store or Google Play to your mobile phone or tablet. The app turns your mobile device into a personal tour guide and its built-in GPS navigation functions guide you from one tour stop to next. The app works offline, so no data plan is needed when traveling abroad.

The Archaeological Museum is the most popular and interesting museum in Bologna. It houses one of Italy's best Egyptian collections, including mummies and treasures from ancient Egypt, as well as artwork from the Roman Empire and many precious sculptures.

Image by Stefano Bolognini on Wikimedia under Creative Commons License.
2

2) International Museum and Library of Music

The Civico Museo Bibliografico Musicale, founded in 1959 to hold the Comune di Bologna’s collection of musical objects, was renamed International Museum and Library of Music in 2004 with the opening of the museum’s site, the Palazzo Sanguinetti, in the historic center of Bologna.

The institute is currently divided into two sites: an ample selection of volumes, paintings, and musical instruments is on display in the museum halls in Strada Maggiore 34 (Palazzo Sanguinetti), while the majority of bibliographic material is accessible in Piazza Rossini 2 (the ex-Convent of San Giacomo) in rooms attached to the G.B. Martini Conservatory of Music. The first floor of the Palazzo is home to the nine rooms of the exhibition, which illustrates about six centuries of the history of European music. There are over one hundred paintings of famous people from the music world, which are a part of the picture gallery started by Padre Giovanni Battista Martini, more than eighty antique musical instruments, and a large selection of valuable historical documents, such as treatises, volumes, opera libretti, letters, manuscripts, original musical scores, etc. The musical instruments displayed in the rooms of the museum originate from the collections of two important Bolognese institutions: the Museo Civico Medievale and the Civico Museo Bibliografico Musicale.

Image by Jdk on Wikimedia under Creative Commons License.
Sight description based on wikipedia
3

The Museum of Zoology is a unique museum containing one of Italy’s most important collections. Established in 1860, its extensive collection of animal specimens date from the 16th to the 18th centuries. In the same building are also located the Museum of Comparative Anatomy and that of Anthropology.

The University Museums are educational attractions which include the Obstetric Museum, Naval Museum, Military Museum and others. They are located in Palazzo Poggi, a palace on the grounds of Bologna University.
Image by Pellegrino Tibaldi on Wikimedia under Creative Commons License.
5

Torre della Specola, built in 1721, served as an astronomical observatory tower for students of the Institute of Sciences. Located on the grounds of Bologna University, today it houses the Astronomical Museum. Its design is representative of Bologna's Medieval style.
Image by Bdesaw on Wikimedia under Creative Commons License.
6

The National Art Gallery of Bologna (Pinacoteca Nazionale di Bologna) is a museum in Bologna. It is located in the former Saint Ignatius Jesuit novitiate of the city's University district, and inside the same building that houses the Academy of Fine Arts.

The museum offers a wide collection of Emilian paintings from the 13th to the 18th century and other fundamental works by artists who were in some way related to the city. The gallery's first nucleus of works came from the acquisition in 1762 by monsignor Francesco Zambeccari of eight early 15th-century altarpieces, salvaged from the demolition of Saint Mary Magdalene's church. In 1997 the Gallery was complety renovated to comply the European standards, and it is one of the best known Italian art galleries, internationally known and appreciated for its space dedicated exclusively to temporary exhibitions and for its educational activities.

7) Museum of Mineralogy (must see)

The Museum of Mineralogy, located on one of the most beautiful squares in Bologna, is an interesting place to visit, displaying unique items such as meteorites, precious stones, other rare stones, minerals and much more.
Image by Hannes Grobe on Wikimedia under Creative Commons License.
8

The Luigi Cattaneo Wax Museum is one of the many University Museums. It is not a wax museum of celebrities, as one might think. This museum displays models of human organs, including diseased ones, as it is dedicated to educating visitors.
Image by Lucarelli on Wikimedia under Creative Commons License.