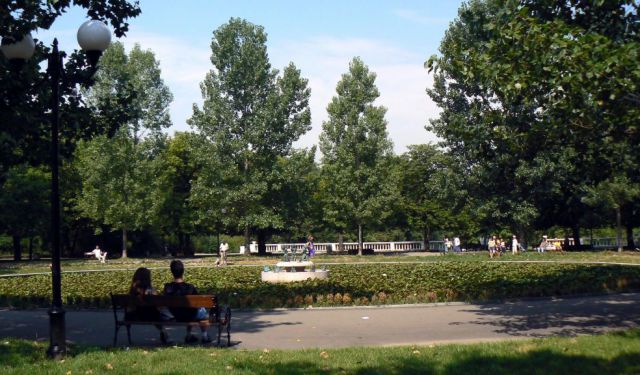 Borisova Gardina is the oldest and most famous park in Sofia. Established in 1884, the park was named after Bulgarian Tsar Boris III. Take our tour to explore the sights within the garden and find out more about this top Bulgarian landmark.
How it works: Download the app "GPSmyCity: Walks in 1K+ Cities" from iTunes App Store or Google Play to your mobile phone or tablet. The app turns your mobile device into a personal tour guide and its built-in GPS navigation functions guide you from one tour stop to next. The app works offline, so no data plan is needed when traveling abroad.

Vasil Levski National Stadium, named after Bulgarian national hero Vasil Levski, is one of Bulgaria's largest sports venues and the country's second largest stadium. The stadium has 43,230 seats and is located in the centre of Sofia, on the territory of the city's oldest and most famous park - the Borisovata gradina.

Vasil Levski National Stadium was officially opened in 1953 and reconstructed in 1966 and 2002. The Bulgaria national football team's home matches and the Bulgarian Cup finals are held at the venue, as well as athletics competitions. It was also used as the home venue for Levski Sofia's Champions League games. The stadium offers also judo, artistic gymnastics, basketball, boxing, aerobics, fencing and table tennis halls, as well as a general physical training hall, two conference halls and three restaurants. It hosted the 1957 European basketball championship.

Image by Bjoertvedt on Wikimedia under Creative Commons License.
Sight description based on wikipedia
2

Ariana (Bulgarian: Ариана) is the name of a medium-sized artificial lake in Knyaz Boris's Garden in Sofia. It is "B"-shaped, 175 m long and 75 m wide, with a small island at its narrowest point. It is located at the northern most corner of the park, in the city centre, between the Eagles' Bridge and the national stadium.

The lake was constructed in the late 19th Century and has since been a focal point for leisurly walks by Sofianites. Water wheels and rowing boats have been a feature, and in winter it was frequently known to freeze over and for people to ice-skate on its surface. In the mid-20th century, a casino was built on the island. In the early 1990s, the municipal government ceased caring for the lake, which dried up and remained empty and disused for nearly two decades. In 2007, the lake and its vicinity were renovated and once more began to be a place of leisure.

Image by Aryadne on Wikimedia under Creative Commons License.
Sight description based on wikipedia
3

Eagles' Bridge (Bulgarian: Орлов мост, Orlov most) is a bridge over the Perlovska River in the centre of Sofia. It gives the name to the important and busy juncture at which it is located. The name of the bridge itself comes from the four statues of eagles on it, which are, symbolically, its protectors and patrons.

The bridge and juncture are located in the immediate proximity of the Vasil Levski National Stadium, the Monument to the Soviet Army and the park Borisova gradina. For the traffic entering Sofia from the east by Tsarigrad Road, Eagles' Bridge is the first juncture and the point from where the city centre is accessed. The bridge was constructed in 1891 by Czech architect Václav Prošek, his brother Jozef and his cousins Bohdan and Jiří, who also designed and built together the similar but lion-themed Lavov Most in 1889.

Image by Bin im Garten on Wikimedia under Creative Commons License.
Sight description based on wikipedia
4

The Mound of Brotherhood, or Bratska Mogila, is a monument within the Borisova Garden that commemorates all those who fought against fascism. Standing 42 meters tall, this obelisk has a statue depicting armed combatants at its base.
Image by Dimitǎr Boevski on Wikimedia under Creative Commons License.
5

The Borisova Gradina TV Tower or the Old TV Tower is a 106-metre tall (including the aerial) TV tower in the garden Borisova Gradina in Sofia. It is known as the tower used for the first Bulgarian National Television broadcasts in 1959.

The tower was designed by architect Lyuben Podponev, engineer A. Voynov and technologist Georgi Kopkanov. Construction began in December 1958 and the tower was officially opened on 26 December 1959. It has an area of 144 m², 14 floors and three platforms. In 1962 the Borisova Gradina TV Tower was the place from which the first Bulgarian VHF radio broadcast (of the Bulgarian National Radio's Programme 1) was realized. Since 1985 the newer Vitosha Mountain TV Tower has mainly been used for television and radio broadcasting in and around Sofia and the Old TV Tower largely remains as a historic landmark.
Image by Nenko Lazarov on Wikimedia under Creative Commons License.
Sight description based on wikipedia
6

The Sofia Seminary of St John of Rila, located in Sofia, is the main seminary of the Bulgarian Orthodox Church and an ecclesiastical institution of higher education. Founded in 1874 as the Samokov Theological School in the Sts. Peter and Paul Monastery in Lyaskovets, it later moved to the capital of Bulgaria as the city council donated a lot for the construction of a separate seminary building.

The Sofia Seminary's construction began in 1902, when Knyaz Ferdinand of Bulgaria laid the foundation stone together with the chairman of the Holy Synod, Metropolitan Simeon of Varna and Veliki Preslav, in the presence of ministers and other influential figures. The complex, designed by Austro-Hungarian architect Friedrich Grünanger, who united Eclecticism with elements of traditional Byzantine architecture, was completed towards the end of 1902 and inaugurated on 20 January 1903. The Seminary Church of St John of Rila, a one-naved cross-domed basilica, was opened on 26 October 1904, St Demetrius' Day.
Image by MrPanyGoff on Wikimedia under Creative Commons License.
Sight description based on wikipedia