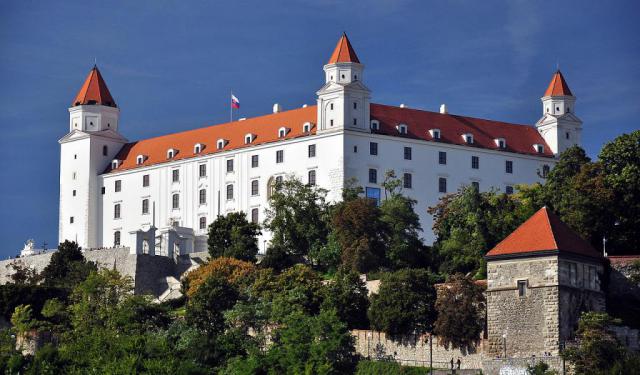 Image by LMih on Wikimedia under Creative Commons License.

The historic center of the largest city in Slovakia is rich in majestic palaces and great mansions. The majority of Bratislava palaces are designed in a Baroque style, and they have a great history related to famous figures like Napoleon and composer Johann Hummel. Don't miss the chance to experience the luxurious life lived not so long ago by emperors and nobility.
How it works: Download the app "GPSmyCity: Walks in 1K+ Cities" from iTunes App Store or Google Play to your mobile phone or tablet. The app turns your mobile device into a personal tour guide and its built-in GPS navigation functions guide you from one tour stop to next. The app works offline, so no data plan is needed when traveling abroad.

Bratislava Castle is the huge rectangular fortress with four corner towers, standing atop a rocky hill directly above the river Danube right in the middle of Bratislava. Strategically positioned to ensure safe passageway between the Carpathians and the Alps, for many centuries it had guarded crossing over the Danube at the intersection of the old central European trade routes – most notably the amber route – running from the Rhine River valley and the Baltic Sea down to the Balkans and the Adriatic Sea. In good weather the Castle allows outstanding view of not only Bratislava, but also the neighboring Austria and Hungary. Many legends are associated with the Castle, which has found place in the historical and cultural heritage of both Hungarians and Germans, due to its connection to Hungary and the Hapsburg monarchy.
Image by Christopher Walker on Wikimedia under Creative Commons License.
2

The Palace of Erdödy, located in Bratislava, Slovakia was built in 1770 by Mathew Walch. The facility originally comprised four houses, which were initially occupied by Count George Leopold Erdödy, the head of the Hungarian Royal Chamber, and his family. The Erdödy family were decedents of Hungarian nobility with their genealogical lines dating back as far as the 14th century. The grand structure was converted during the 19th century into a palace for the son of Count George Leopold Erdödy, Jan Nepomuk Erdödy. Originally, the building was erected with three floors and a fourth floor was added to it at the beginning of the 20th century. It has four wings and an immense central courtyard. The rooms have vaulted ceilings with rococo stucco. Over the years, the structure has been the home of Hungarian nobility, a concert hall and a government facility. The building is a tremendous example of rococo style, which is acknowledged for its florid embellishments. Today, the palace houses a selection of high-end cafes, restaurants, shops and boutiques amidst the historic sites of the town. Visitors to the municipality will appreciate spending the day exploring the many amazing buildings and varied architectural elements which make this place exceptional.
Image by Wizzard on Wikimedia under Creative Commons License.
3

Pálffy Palace is located in the Old Town portion of Bratislava, Slovakia. Built originally for Count Leopold Pálffy, Count of Pozsony County and a Major General in the armed forces of Empress Maria Theresa, the palace is a good example of a Baroque piece of architecture. Over the years, archeological digs have unearthed indications of a Gothic structure, which once stood on the grounds of the palace, along with Roman and Celtic artifacts. The palace has had many uses, since it was first constructed as a home for Count Leopold Pálffy. It has been a government mint, the location of one of Wolfgang Amadeus Mozart’s early concerts and the site of the Austrian embassy. Along with the embassy, which is currently housed on the grounds of the palace, visitors will want to spend time visiting the on-site gallery, which displays a rich collection of the original paintings of Dutch and Flemish masters from the 17th and 18th centuries including, Rembrandt and Rubens. The Old Town section of the town of Bratislava is characterized by a wide range of high-end shopping, boutiques, cafes and restaurants. Tourists will relish spending the day taking a walking tour of the region, while planning time to revel in some of the local flavors at one of the marvelous local eateries.
Image by Krokodyl on Wikimedia under Creative Commons License.
4

The Palace of Zichy, or Ziciho Palac as you say in Slovak, represents a beautiful example of fine architecture from the end of the 18th century. It's situated in the historic center of Bratislava and designed in Neo-Classical style. The Palace was built in 1775 for Count Franz Zichy, who was the master of great composer Heinrich Marschner. This composer served as a teacher for the count's family. Now, the Palace of Zichy serves as a hall for wedding ceremonies.
Image by Wizzard on Wikimedia under Creative Commons License.
5

Leopold de Pauli’s Palace was built by architect Franz K.Romisch for Leopold de Pauli in 1775-1776. The palace halls resounded with the brilliant and unforgettable music of Ferenz Liszt, who performed there in 1820. The Palace also features an amazing garden, where you can find a beautiful musical pavilion designed in Rococo style. Today, the music pavilion and the palace itself are owned by the University Library.
Image by Dguendel on Wikimedia under Creative Commons License.
6

Miestodržiteľský palác (Vice Governor's palace in Bratislava) is an old and historically important building, located in the capital of Slovakia, Bratislava. It stands in the main square of Old Town and was owned by the city of Bratislava until it was bought by the state in the 18th century, for the purpose of housing the vice governor's council. After WWII, the building was used by many institutions until the Velvet Revolution in 1989. At present, it's owned by the Slovak Republic Government office and it serves as one of the many representative buildings of the Slovak capital.
Image by Wizzard on Wikimedia under Creative Commons License.
Sight description based on wikipedia
7

Primate's Palace (or Primacialny palac as they call it) was created between 1778 and 1781 by architect Melchior Hefele for the Archbishop of Bratislava József Batthyány. The palace is famous for its Hall of Mirrors that has hosted many historic events over the centuries, including the signing of the fourth Peace of Pressburg in 1805 after the Battle of Austerlitz which effectively ended the War of the Third Coalition.
Image by Elin on Wikimedia under Creative Commons License.
8

The Grassalkovich Palace is the residence of the Slovakian president. This palace represents a mixture of Rococo and late Baroque styles and was built by architect Anton Mayerhofer in 1760 for the Hungarian nobleman, Count Antal Grassalkovich, the vassal of Habsburg Empress Maria Theresa. The palace was intended primarily as an entertainment venue and had hosted many balls and musical parties throughout its history thrown by the Habsburg royals; eventually it became a popular center of musical life in Pressburg and saw many celebrities of the day, including composer Joseph Haydn himself premiering here some of his works. In September 1996, the palace underwent reconstruction and was turned into a presidential office. The adjacent garden, containing the statue of Bratislava-born composer Jan Nepomuk Hummel, has been made a public park.
Image by Juraj Kubica on Wikimedia under Creative Commons License.
Sight description based on wikipedia
9

Used mainly as a government office, the Summer Archbishop’s Palace was originally built in the 1600s for the prelates of Esztergom. A striking English garden is one of the exceptional features attached to this structure. The current building was constructed under the direction of Archbishop František Barkóczy by architect F.A. Hillebrandt. The facility emulates all of the grandeur expected of a Baroque palace. Together with its Rococo décor, the space is a wonderful example of architecture from this time period. Following the Napoleonic war, the structure was used as a military hospital, with the main room being split in two sections and filled with beds to care for the wounded. In the present day, the building is home to the Slovakian Ministry of Foreign Affairs. Only two of the exquisite art pieces from the original structure remain, which were located in the palace’s chapel, a fresco and an altar. The palace is not open to the public, for the exception of one special day each year known as Doors Open Days. On this day, guided tours are provided, which include very specific portions of the building including, the green room, mirror room and the pink room, along with the chapel and the conference room.
Image by Pudelek on Wikimedia under Creative Commons License.
Sight description based on wikipedia