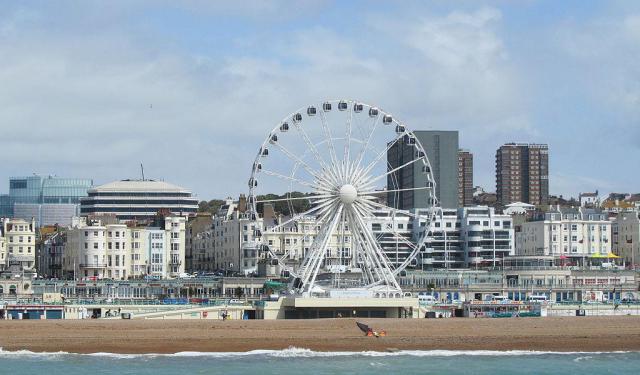 Image by Jvhertum on Wikimedia under Creative Commons License.

Just an hour or so train ride down south from London, Brighton is the most popular tourist destination overlooking the English Channel. Alongside some typical of any seaside resort attractions, such as Brighton Pier with its waterfront amusements and vibrant nightlife, there are quite a few unique landmarks attesting to the city's rich historic and cultural heritage. This orientation walk will introduce you to the most notable of them!
How it works: Download the app "GPSmyCity: Walks in 1K+ Cities" from iTunes App Store or Google Play to your mobile phone or tablet. The app turns your mobile device into a personal tour guide and its built-in GPS navigation functions guide you from one tour stop to next. The app works offline, so no data plan is needed when traveling abroad.

The Royal Pavilion is a former royal residence located in Brighton. It was built in three campaigns, beginning in 1787, as a seaside retreat for George, Prince of Wales, from 1811 Prince Regent. It is often referred to as the Brighton Pavilion. It is built in the Indo-Saracenic style prevalent in India for most of the 19th century, with the most extravagant chinoiserie interiors ever executed in the British Isles. The palace looks rather striking in the middle of Brighton, having a very Indian appearance on the outside. However, the fanciful interior design, primarily by Frederick Crace and the little-known decorative painter Robert Jones, is heavily influenced by both Chinese and Indian fashion (with Mughal and Islamic architectural elements). It is a prime example of the exoticism that was an alternative to more classicizing the mainstream taste in the Regency style.
Image by Jim Linwood on Flickr under Creative Commons License.
Sight description based on wikipedia
2

The original chapel was a stuccoed building in a broadly Classical style, with rounded sash windows and a pediment with the Prince's coat of arms. A row of Doric columns flanked the entrance. Inside there were galleries on each wall, supported by decorated columns. The gallery above the altar contained the organ, and there was a tall, highly decorated pulpit. The alterations of 1876–1877 removed the gallery above the altar and added a chancel, separated from the nave by an iron rood screen, new pulpit and lectern. The main weekly service at the Chapel Royal is held on Sundays at 11:00am. Other services are held on Saturdays, Tuesdays and Thursdays. There has been a long musical tradition at the chapel; concerts have been held right from the beginning, and continue to be a regular feature, usually on Tuesdays.

Image by The Voice of Hassocks on Wikimedia under Creative Commons License.
Sight description based on wikipedia
3

Brighton Square is situated in the heart of Brighton's historic Lanes. It houses twenty one shops and restaurants, where you will find a widely diverse selection of goods and services. Enjoy a unique and lively shopping experience without the hassle of a crowded mall!
Image by DaveBleasdale on Flickr under Creative Commons License.
4

The Lanes is another popular destination for shopping in Brighton. Situated in the heart of the town, it is home to a number of independent shops and boutiques, where you can find antiques, jewellery, interior design, furniture, arts objects, famous brands and much, much more!
Image by Anosmia on Flickr under Creative Commons License.
5

North Laine is one of the most prominent shopping districts in Brighton. This active area is endowed with over 320 shops. Whether you are looking for fashionable clothing, trendy fashion, nice gifts, fine arts, antiques or retro objects, you'll find it here in North Laine.
Image by Simon Carey on Wikimedia under Creative Commons License.
6

The Theatre Royal is a theatre in Brighton, presenting a range of West End and touring musicals and plays, along with performances of opera and ballet and a Christmas pantomime. In 1806, the Prince of Wales gave Royal Assent for the theatre to be built and it opened on June 27, 1807, with a performance of William Shakespeare's Hamlet. Since 1999, the theatre has been owned by the Ambassador Theatre Group. In 2007, the theatre celebrated its 200th anniversary with a visit from Queen Elizabeth II who renamed a box after herself.
Image by Jim on Wikimedia under Creative Commons License.
Sight description based on wikipedia
7

Brighton Museum & Art Gallery is a free-to-view municipally-owned public museum and art gallery in the city of Brighton and Hove in the South East of England. It is part of "Royal Pavilion & Museums, Brighton and Hove".

The building which houses the collection is part of the Royal Pavilion Estate and was originally built for the Prince of Wales, later George IV and completed in 1805. In September 1851 it was announced that part of the Pavilion was to be appropriated for annual art exhibitions and two months later the first of these was held. The local talent to which it was confined included Frederick Nash and Copley Fielding. The room devoted to the exhibition was the original South Gallery, now the First Conference Room, but later the exhibitions even spread to the Great Kitchen. The museum and art gallery occupied its current situation in the building in 1902.

Image by The Voice of Hassocks on Wikimedia under Creative Commons License.
Sight description based on wikipedia
8

8) Sallis Benney Theatre and University of Brighton Gallery (must see)

Located in the centre of Brighton at the Grand Parade Campus, Sallis Benney Theatre and University of Brighton Gallery is a prominent cultural venue in which to explore visual and performing arts, including Brighton Festival performances, fashion shows, exhibitions, etc. Exhibitions are free and open to the public from Monday to Saturday.
Image by Simon Carey on Wikimedia under Creative Commons License.
9

Situated in the heart of the city, Victoria Gardens is one of the most beautiful and popular public parks in Brighton. Named after the great Queen Victoria, one of the greatest and longest-serving British monarchs, it houses the sculpture of the Queen and is a prominent attraction.
Image by Simon Carey on Wikimedia under Creative Commons License.
10

Brighton War Memorial is another prominent attraction, located in the same area. This memorial was built in honour of the 2597 men and 3 women who lost their lives during the 1st World War. In the center of its quadratic pool, you will see a small fountain.
Image by James Darwin on Flickr under Creative Commons License.
11

The Victoria Fountain is situated near the Marlborough House in the beautiful Old Steine area. It was inaugurated for the 27th birthday of Queen Victoria on May 25, 1846. The fountain represents two big bronze bowls. The lower one is supported by three huge fishes.
Image by Dominicos on Wikimedia under Creative Commons License.
12

Brighton’s Sea Life Centre is located near the Brighton Pier and is an excellent place for family entertainment! With its vast collection of displays, it will tell you a lot of interesting and useful information about the marine world. Learn more about aquatic life and enjoy Brighton’s Sea Life Centre!
Image by mickie collins on Wikimedia under Creative Commons License.
13

The West Pier was its rival but was closed in 1975 and was subsequently severely damaged by fires and storms, with the remaining iron structure being partially demolished in 2010. Work began on the Palace Pier in 1891 and it opened in May 1899 after costing a record £27,000 to build. This was Brighton's third pier. A concert hall opened two years later, and by 1911 this had become a theater. The pier features prominently in the 1971 film, Carry On at Your Convenience, and it is frequently shown iconically to "set" film and television features in Brighton, for example in scenes in Mirrormask, The Persuaders, the Doctor Who serial The Leisure Hive (1980), the 1979 film Quadrophenia.
Image by Colin Gregory Palmer on Wikimedia under Creative Commons License.
Sight description based on wikipedia