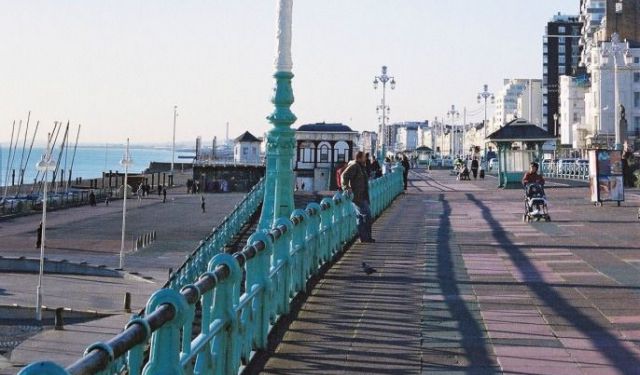 Image by Vox Humana 8' on Wikimedia under Creative Commons License.

Initially a little fishing village on the south coast of England, Brighton was transformed into a prominent seaside resort. Brighton seafront offers its beautiful seaside, housing two museums, the old carousel, piers, souvenir shops, cafes and the famous Artist Quarter. This walking tour will take you to the most interesting places on Brighton's seafront.
How it works: Download the app "GPSmyCity: Walks in 1K+ Cities" from iTunes App Store or Google Play to your mobile phone or tablet. The app turns your mobile device into a personal tour guide and its built-in GPS navigation functions guide you from one tour stop to next. The app works offline, so no data plan is needed when traveling abroad.

Seafront Image is a Brighton Fishing Museum’s Shop that can be found opposite the Fishing Museum. Here you can glance through and purchase some unique images of the Brighton seafront from local photographer Robert Leighton; perfect souvenirs, cards and fine art canvases.

Image by Annie Mole on Flickr under Creative Commons License.
2

The Brighton Fishing Museum is located in the Fishing Quarter, the heart of Brighton seafront. It will teach you about the rich history of the fishing community in Brighton through film, photography, paintings and memorabilia of Brighton seafront life. The museum is open every day and admission is free.

Image by Alex Gunningham on Flickr under Creative Commons License.
3

Next to the Old Penny Arcade Museum on Brighton seafront, you will find old carousel. With its numerous, beautiful animal figures and splendid décor, it attracts a lot of tourists and locals. If you are walking with kids, you certainly shouldn’t miss this place!
Image by Elsie esq. on Flickr under Creative Commons License.
4

Next to the prominent Brighton Pier you will find another pier, which is home to a large circular sculpture of a doughnut, officially called The Big Green Bagel. It is a present from the Mayor of Naples and is known in Brighton as the "Seasick Doughnut".
Image by Kelly McCarthy on Wikimedia under Creative Commons License.
6

The West Pier was its rival but was closed in 1975 and was subsequently severely damaged by fires and storms, with the remaining iron structure being partially demolished in 2010. Work began on the Palace Pier in 1891 and it opened in May 1899 after costing a record £27,000 to build. This was Brighton's third pier. A concert hall opened two years later, and by 1911 this had become a theater. The pier features prominently in the 1971 film, Carry On at Your Convenience, and it is frequently shown iconically to "set" film and television features in Brighton, for example in scenes in Mirrormask, The Persuaders, the Doctor Who serial The Leisure Hive (1980), the 1979 film Quadrophenia.

Image by Colin Gregory Palmer on Wikimedia under Creative Commons License.
Sight description based on wikipedia
7

The West Pier is a pier in Brighton. It was built in 1866 by Eugenius Birch and has been closed and deteriorating since 1975, awaiting renovation, although after two fires and several storms, little is left in situ. It was Brighton's second pier, joining The Royal Suspension Chain Pier of 1823, and it is one of only two Grade I listed piers in the UK, the other being Clevedon Pier.

A concert hall was added in 1916 and a new top-deck entrance in 1932. In 1965 the pier was bought by a company that owned some seafront hotels and entertainment venues. They had ambitions for the pier but as maintenance costs increased the pier was closed in 1975 when Brighton Corporation declined to buy it and the pier passed into the hands of the Crown Estates Commissioners. A trust was formed to save the pier and in 1984 they bought it for a nominal sum. On 23 June 2004 high winds caused the middle of the pier to collapse completely. Despite all these setbacks, the West Pier Trust remained adamant that they would soon begin full restoration work.