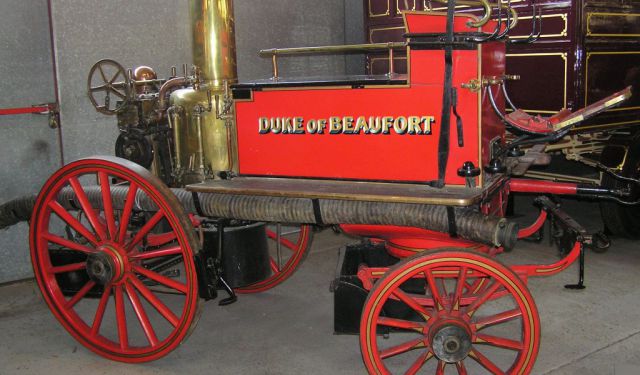 Image by Arpingstone on Wikimedia under Creative Commons License.

From time immemorial Bristol has been known as an historic port with stunning architectural masterpieces and a rich cultural heritage. The city features an incredible range of museums highlighting the most important periods of British history. Take this walking tour to visit some of Bristol's museums.
How it works: Download the app "GPSmyCity: Walks in 1K+ Cities" from iTunes App Store or Google Play to your mobile phone or tablet. The app turns your mobile device into a personal tour guide and its built-in GPS navigation functions guide you from one tour stop to next. The app works offline, so no data plan is needed when traveling abroad.

SS Great Britain was an advanced passenger steamship designed by Isambard Kingdom Brunel for the Great Western Steamship Company's transatlantic service between Bristol and New York. While other ships had previously been built of iron or equipped with a screw propeller, Great Britain was the first to combine these features in a large ocean-going ship.

She was the first iron steamer to cross the Atlantic, which she did in 1845, in the time of 14 days. When launched in 1843, Great Britain was by far the largest vessel afloat. However, her protracted construction and high cost had left her owners in a difficult financial position, and they were forced out of business in 1846 after the ship was stranded by a navigational error. Sold for salvage and repaired, Great Britain carried thousands of immigrants to Australia until converted to sail in 1881. Three years later, the vessel was retired to the Falkland Islands where she was used as a warehouse, quarantine ship and coal hulk until scuttled in 1937. In 1970, Great Britain was returned to the Bristol dry dock where she was first built. Now listed as part of the National Historic Fleet, Core Collection, the vessel is an award-winning visitor attraction and museum ship in Bristol Harbour, with between 150,000–170,000 visitors annually.

Image by Canis Major on Flickr under Creative Commons License.
Sight description based on wikipedia
2

M Shed is located on Prince's Wharf beside the Floating Harbour in a dockside transit shed. The museum's name is derived from the way that the port identified each of its sheds. M Shed is home to displays of 3,000 Bristol artifacts and stories, showing Bristol's role in the slave trade and items on transport, people, and the arts. The museum opened in June 2011, with exhibits exploring life and work in the city. In its first year, 700,000 people visited the new museum. Normally moored in front of the museum is a collection of historic vessels, which include the Pyronaut, a 1934 fire-boat, and two tugboats: John King built as a diesel tug in 1935 and Mayflower, the world's oldest surviving steam tug built in 1861.

There is a shop, learning space and cafe and admission is free. On the quayside outside the museum are four electrically powered cargo cranes built in 1951 by Stothert & Pitt. A short distance to the west is a much older crane, the sole surviving operational example of a Fairbairn steam crane. Built in 1878, also by Stothert & Pitt, it was in regular use until 1973 loading and unloading ships and railway wagons with loads up to 35 tons. It has been restored and is in working order, operating on some bank holidays and the Bristol Harbour Festival. Bristol Harbour Railway offers train rides along the quayside on bank holidays, using restored steam locomotives and rolling stock.

There are three main galleries: Bristol Places, Bristol People and Bristol Life, each telling a story of Bristol, and containing a mixture of media. Among the 3,000 exhibits of material on display are models of Nick Park’s Oscar-winning animated duo Wallace and Gromit, a 10m long mural by local graffiti artists, and pink spray painted record decks (1980) courtesy of Massive Attack, the trip hop trio from Bristol. The band’s experimental sound would play a big part in the formation of the city’s club scene in the 1980s and 1990s. On display are newspaper clippings from the city’s landmark political episodes, including a triumphant moment for the fight against racial prejudice in 1963 when a group of West Indian workers led a bus boycott after the city Omnibus Company refused to recruit black workers. The dispute was championed by Labour socialist Tony Benn and would help contribute to a decrease in racial discrimination in Britain. A centerpiece of the galleries is a huge mural entitled Window on Bristol, painted by local artists Andy Council and Luke Palmer. It depicts Bristol's buildings in the form of a huge graffiti-esque dinosaur.

****Banksy Walk*****
Grim Reaper. One of the most infamous of Banksy's works was originally painted on the side of the Thekla Social boat moored in Bristol harbour. the decision was taken in August 2014 to remove the work to protect it from damage and wear and it is now on display in Bristol's M Shed.
***PH****


Image by Adrian pingstone on Wikimedia under Creative Commons License.
Sight description based on wikipedia
3

We The Curious is "an idea and a place for everybody", and its aim is "to create a culture of curiosity". It features over 250 interactive exhibits over two floors, and members of the public and school groups can also engage with the Live Science Team over programming in the kitchen, studio and on live lab. The place was recently renovated and quite a lot of new facilities were added, so there is something there to capture every imagination. Add in a cafe with lots of seating places, as well as an indoor picnic area if you'd rather bring your own food.

We The Curious is also home of the UK's first 3D planetarium, hosting 30-minute shows that are highly recommended for science and astronomy enthusiasts, as well as families and groups of friends for a unique night out.

4) The Georgian House Museum (must see)

The Georgian House is a historic building at 7 Great George Street, Bristol. It is open to the public and has been a branch of Bristol City Museum and Art Gallery since it was presented to the city as a museum in 1937. The Georgian House is a well preserved example of a typical late 18th century town house. It was built around 1790 for John Pinney a successful sugar merchant, and is believed to be the house where the poets William Wordsworth and Samuel Taylor Coleridge first met. It was also home to Pinney's slave, Pero, after whom Pero's Bridge at Bristol Harbour is named. It contains some of the original furniture and fittings, such as the bureau-bookcase in the study and a rare cold water plunge bath, and has been used as a location for the BBC TV series A Respectable Trade, which was adapted from the book by Philippa Gregory, about the slave trade.
Image by Linda Bailey on Wikimedia under Creative Commons License.
Sight description based on wikipedia
5

This museum contains a collection of natural history exhibits, among them a saber-toothed tiger skeleton and other models of extinct species. The building itself is a piece of history, having been built in 1925.
Image by robinvanmourik on Flickr under Creative Commons License.
6

The Bristol City Museum and Art Gallery is a large museum and art gallery in Bristol. It is run by the city council with no entrance fee.

The museum includes sections on natural history as well as local, national and international archaeology. The art gallery contains works from all periods, including many by internationally famous artists, as well a collection of modern paintings of Bristol.

The highlight of the museum is the Banksy sculpture, Paint Pot Angel, which stands in the Museum’s sculpture hall and is on permanent display. In true Banksy style, the sculpture features an angel covered by a can of pink paint. It has become an iconic piece of Banksy's work, attracting thousands of Banksy fans from all over the world each year.

The Royal West of England Academy (RWA) is an art gallery where Queens Road meets Whiteladies Road, in Bristol. The Academy was the first art gallery in Bristol. Its foundation was financed by a bequest of £2000 in the will of Ellen Sharples in 1849, and a group of artists in Bristol, known as the Bristol Society of Artists. These were mostly landscape painters. In 1844, when the Bristol Academy for the Promotion of Fine Arts was founded, the Bristol Society of Artists was incorporated into it. At this time the President and committee was predominantly its patrons, rather than its artists. In 1913 King George V granted the Academy its Royal title, with the reigning monarch as its Patron, and by 1914 a major extension to the front of the building, including the dome and Walter Crane lunettes, was completed. Immediately after the war ended the Council applied for the release of the galleries but was informed that they would be occupied by the Inland Revenue until further notice. It was not until 1950 that the building was returned to its original function, after the intervention of the then Prime Minister, Clement Attlee. During the 1950's the Royal West of England Academy Schools became the West of England College of Art. This moved to the Bower Ashton campus in 1966, where it was then absorbed by the University of the West of England (School of Visual Studies).
Image by Linda Bailey on Wikimedia under Creative Commons License.
Sight description based on wikipedia