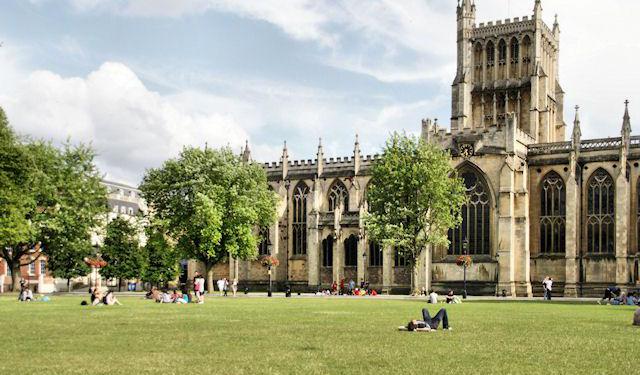 The walls of the religious buildings contain many centuries of history. Bristol boasts churches established in the 13th through the 18th centuries. At the time of the Victorian and Edwardian reign, churches provided not only a place of worship but also educational and welfare services. Take this walking tour around Bristol to see the rich heritage of its churches and cathedrals.
Image Courtesy of Wikimedia and Pierre Terre.
How it works: Download the app "GPSmyCity: Walks in 1K+ Cities" from iTunes App Store or Google Play to your mobile phone or tablet. The app turns your mobile device into a personal tour guide and its built-in GPS navigation functions guide you from one tour stop to next. The app works offline, so no data plan is needed when traveling abroad.

Bristol Cathedral is a Church of England cathedral that was founded in 1140. The original church, St. Augustine's Abby, was completed in 1148, though little of this structure remains in place.

Among the many notable features of Bristol Cathedral are the stained glass windows. Many of the windows were replaced in the 1800s though some were replaced after the Bristol Blitz during World War II and other features date as far back as the 14th century.

The cathedral has a number of monuments, most of which are dedicated to abbots and bishops. Also of interest to most tourists is the organ, which was built in 1685 by Renatus Harris.

Visitors are welcome to tour the cathedral during its open hours. It is open from noon to 1 PM Tuesday through Saturday and during daily prayer, Eucharist and evensong.

It was built as the chapel to the adjacent Gaunt's Hospital, now demolished, founded in 1220. Except for the west front, the church has been enclosed by later adjacent buildings, although the tower is still visible. The church contains some fine late gothic features and a collection of continental stained glass. The church contains several chest tombs. Two of these, in the south aisle chapel, are of knights which may be the church's founders, Maurice de Gaunt and Robert de Gournay. There are more for other members of the Berkeley family, to which the founders were related. The chest tomb with effigy of Miles Salley(d.1516), Bishop of Llandaff from 1500, is in the chancel, to the south side of the altar.
Image Courtesy of Wikimedia and NotFromUtrecht.
Sight description based on Wikipedia.
3

The site was on the banks of the River Frome, which was diverted at around this time to create Bristol Harbour. The clerestory was repaired after a storm in 1703. The aisle and east windows were restored in 1873. The tower measures approximately 18 ft by 20 ft at its base, and rises to a total height of 152 ft. It originally contained six bells but these have been replaced over the years and the number increased to twelve. The tower is typical of Somerset churches, but with the addition of a "Gloucestershire crown" of arcaded battlements, pinnacles and open-work arcading. The 15th-century brass eagle lectern and the iron sword rest by William Edney of about 1710 were moved to St Stephen's from St Nicholas church, which was damaged in the Bristol Blitz.
Image Courtesy of Wikimedia and Tim Green.
Sight description based on Wikipedia.
4

The church is very narrow as it is built into and alongside the city walls. Consequently it is also known as St John's on the Wall. Beneath the church is a vaulted crypt, which was dedicated to the Holy Cross. A conduit has supplied water from Brandon Hill since 1374, and the course of the pipe is marked in places by small plaques set into the pavements. Among the monuments in the church are those of Walter Frampton (died 1357), thrice Mayor of Bristol and a great benefactor of the church, and a brass commemorating Thomas Rowley (died c. 1478).
Image Courtesy of Wikimedia and NotFromUtrecht.
Sight description based on Wikipedia.
5

St Nicholas is a church in St Nicholas Street, Bristol. The first church was founded before 1154, with a chancel extending over the south gate of the city. The gate and old church were demolished to make way for the rebuilding of Bristol Bridge and the church was rebuilt in 1762-9. Part of the old church and town wall survives in the 14th century crypt. The interior was destroyed by bombing in the Bristol Blitz of 1940 and rebuilt in 1974-5 as a church museum, which has now closed and the building is used by the city council as offices.

The building still holds statues of King Edward I and King Edward III which were removed from Arno's Court Triumphal Arch. The original statues were taken from Bristol's Lawfords' Gate that was demolished around 1760. Other statues are 13th century figures from Bristol's Newgate representing Robert, the builder of Bristol Castle, and Geoffrey de Montbray, bishop of Coutances, builder of the fortified walls of Bristol. They were moved to the church, due to their deteriorating condition, in 1898.
Image Courtesy of Wikimedia and William Avery.
Sight description based on Wikipedia.
6

The church was built and beautified by Bristol's wealthy merchants, who paid to have masses sung for their souls and many of whom are commemorated there. Parts of the church date to the beginning of the 12th century. Although its plan dates from an earlier period, much of the church as it now stands was built between 1292 and 1370, with the south aisle and transept in the Decorated Gothic of the 13th century and the greater part of the building in the late 14th century Perpendicular. St Mary Redcliffe is cruciform in plan, with a chapel extending to the east of the chancel, and a large tower placed asymmetrically to the north of the west front. There is a rectangular 13th century porch on either side of the nave, that on the north side having been extended with a more elaborate polygonal outer porch in the 14th century.
Image Courtesy of Wikimedia and Zhurakovskyi.
Sight description based on Wikipedia.