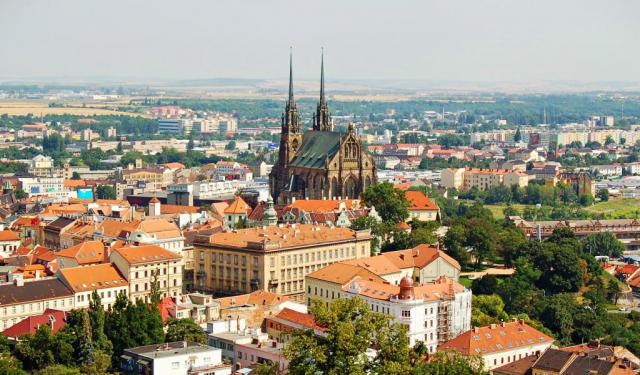 Image by CivArmy on Wikimedia under Creative Commons License.

The second largest city in the Czech Republic, Brno is also the second most visited after Prague. Founded in the 14th century, it boasts a rich collection of medieval architecture, including the Špilberk Castle complex housing a city museum, park and a former prison with vaulted tunnels. On this walk you will get a chance to explore the city's most notable architectural and historic landmarks.
How it works: Download the app "GPSmyCity: Walks in 1K+ Cities" from iTunes App Store or Google Play to your mobile phone or tablet. The app turns your mobile device into a personal tour guide and its built-in GPS navigation functions guide you from one tour stop to next. The app works offline, so no data plan is needed when traveling abroad.

The Zelný Trh (The Vegetable Market Square) is situated in the heart of the city of Brno. The square was established in 13th century before the city itself. It is considered to be the largest square in the historical part of the town. It is always lively and teeming with people. The market's specialties are: vegetables, fruits and flower decorations.
Image by Kirk on Wikimedia under Creative Commons License.
3

The Moravské Zemské Muzeum (The Moravian Museum) was constituted in July 1817 by a legal order of Emperor Francis I. It is the second oldest and largest museum in the Czech Republic. Some of its departments are scattered all over the city and they include history of music, history of literature, history of theatre, archaeology, geology, paleontology, mineralogy and petrography and entomology. Its collections contain beyond 6 million articles that are representative of different domains in science.

Image by Kirk on Wikimedia under Creative Commons License.
4

The Reduta Theatre (Czech: Divadlo Reduta) is a theatre situated in Brno. Known in the 18th century as the Taverna Theatre, it served as a venue for theatrical performances presented mainly in German and Italian. In 1767, Wolfgang Amadeus Mozart performed with his sister in a concert there.

After a series of extensive fires in 1785 and 1786, the city council decided to rebuild the theatre in the neoclassical architectural style, with a new two-story main hall. The reconstructed theatre, now named the Reduta Theatre, presented mainly German plays, with performances in Czech held only infrequently. The last devastating fire in 1870 caused the theatre to close again, after which the building was used as the city market hall. In 1918, following the establishment of the new Czechoslovak state, the activities of the theatre were again restored. In the 1950s, the building was redesigned according to the plans of architects Bohuslav and Kamil Fuchs. Up to the 1990s, the theatre served as a stage for Czech operettas. The last reconstruction was completed in 2005. The project was awarded the Grand Prix in a competition held by the Czech Chamber of Architects. As of 2010, the theatre is a part of the National Theatre in Brno. Reduta has no permanent ensemble. Now part of the National Theatre in Brno, it is the oldest theatre in Central Europe.

Image by Petr Šmerkl on Wikimedia under Creative Commons License.
Sight description based on wikipedia
5

The Kašna Parnas (The Parnas Fountain) dominates the Zelny Trh Square with its beauty designed by the famous Viennese architect JB Fischer von Erlach between the years 1691 and 1695. In the middle of the fountain there is an artificially made rocky cliff with a towering figure of Europe, in a triumphal pose on a conquered dragon.
Image by David Novák on Wikimedia under Creative Commons License.
6

The Old Town hall is the oldest secular building in Brno. The origins of the building go back to 1240, the city administration was situated here until 1935. The tower provides the best views of Zleny Trh and the Spillberk Castle, and it is easy to climb due to the wide staircase. There are also a few old photos and maps of the town to look at too.
Image by Harold on Wikimedia under Creative Commons License.
7

Masarykova street is the main shopping street in Brno, named after the first president of Czechoslovakia. At the same time, it represents one of the most famous and oldest streets of Brno, and it was used in different trades starting in the 14th century. Today, the street is home to top, prestigious shops and boutiques.
Image by I.Sáček, senior on Wikimedia under Creative Commons License.
8

Měnínská Brána is the only preserved city gate of Brno located on Měnínská Street not so far from Náměstí Svobody (Freedom Square). Its roots go back to the 13th century, when it was part of city walls. In 1970, the place had been adjusted for exhibition purposes. At the present time, the building is managed by the Brno City Museum.
Image by Kirk on Wikimedia under Creative Commons License.
9

Mahen Theatre (Mahenovo divadlo) is a Czech theatre situated in the city of Brno. The founding stone was laid on July 18, 1881. It was built in a combination of Neo-renaissance, Neo-baroque and Neoclassical architectural styles. Initially, Mahen Theatre was a German opera house, and it was called Deutsches Stadttheater (German City Theatre). In 1918, following World War I, it passed into the hands of the newly founded Czechoslovak state. It was renamed Divadlo na Hradbách (Theatre on the Wall) and the first dramatical advisor became the novelist and playwright Jiří Mahen, after whom the theatre has been named as of 1965. Since 1965, the theatre has served as the home stage of the dramatical ensemble of the National Theatre in Brno. Mahen Theatre, built as German Deutsches Stadttheater in 1882, was one of the first public buildings in the world lit entirely by electric light.
Image by Avfedorenko on Wikimedia under Creative Commons License.
Sight description based on wikipedia
10

Náměstí Svobody (The Freedom Square) is regarded as an imaginary center of the city. It has been mentioned in the city records for the first time in the 13th century with the name Forum Inferius. In Medieval times there were rich burghers and nobles that built homes around it and thus increased the importance of the square. In 1901, a tram line was built over the square; only a part of the track which led from the northern direction is preserved until now.
Image by Millenium187 on Wikimedia under Creative Commons License.
11

The St. James' Church (Kostel Svatého Jakuba) is a late Gothic architectural masterpiece and church in Brno. Its history dates back to the early 13th century. The church is the tomb of the famous defender of Brno - Louise de Raduit Souches. The church's ceiling is known for its numerous guild features, crests of noble families and various monograms. The holy building was declared a national cultural monument in 1995.
Image by Jiří Sedláček on Wikimedia under Creative Commons License.
12

Moravská Galerie (The Moravian Gallery) is the second biggest museum of art located in the Czech Republic. It was constituted by the fusion of two older institutions. Governor's Palace, Pražák Palace and Museum of Decorative Arts are the three main components of the Gallery. Starting in 1963, it was host to the Mezinárodní bienále grafického design (International Biennale of Graphic Design).
Image by Dezidor on Wikimedia under Creative Commons License.
13

The New Town Hall is a building complex located in front of the Dominican Square and it is also the site were city administration resides. The complex is of great historic and architectural importance to the city of Brno. Some of the buildings from the complex are very old and are closely tied in to the development of the city.
Image by Dezidor on Wikimedia under Creative Commons License.
14

Špilberk Park is considered to be one of the largest green spots of Brno. It boasts a great variety of trees and plants. Here, we also find the Špilberk Castle and The Memorial to Italian Carbonari. It is a very popular place among the locals as it is a perfect spot for relaxation.
Image by Semmi on Flickr under Creative Commons License.
15

Špilberk Castle is an old castle on the hilltop in Brno, Southern Moravia. It began to be built as early as the first half of the 13th century by the Přemyslid kings and complete by King Ottokar II of Bohemia. From a major royal castle established around the mid-13th century, and the seat of the Moravian margraves in the mid-14th century, it was gradually turned into a huge baroque fortress considered the heaviest prison in the Austro-Hungarian empire, and then into barracks. This prison had always been part of the Špilberk fortress.

Špilberk entered public consciousness as a centre of tribulation and oppression on two more occasions; firstly, during the First World War when, together with military prisoners, civilian objectors to the Austro-Hungarian regime were imprisoned here, and secondly in the first year of the Nazi occupation of Czechoslovakia. The Czechoslovak army left Špilberk in 1959, putting to a definite end its military era. The following year, Špilberk became the seat of the Brno City Museum.
Image by Pavel Ševela on Wikimedia under Creative Commons License.
Sight description based on wikipedia