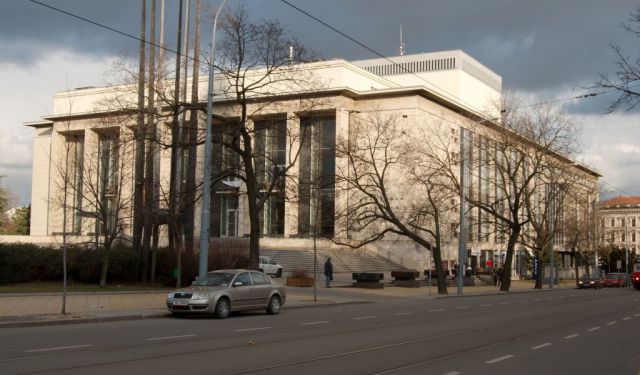 Image by Kirk on Wikimedia under Creative Commons License.

The capital of the Moravian region is known for having a reach cultural scene that has played an important part in shaping the region's image and its artistic values. The city of Brno boasts a large number of theaters, libraries, experimental art studios and many more. Take this tour to discover the cultural hot spots of Brno.
How it works: Download the app "GPSmyCity: Walks in 1K+ Cities" from iTunes App Store or Google Play to your mobile phone or tablet. The app turns your mobile device into a personal tour guide and its built-in GPS navigation functions guide you from one tour stop to next. The app works offline, so no data plan is needed when traveling abroad.

The Concert Hall of Brno is located in the notable architectural building, Besední Dům. This performance venue is also the home of Brno's Philharmonic Orchestra, one of the most respected European classical orchestras. The Hall organizes different cultural events in cooperation with the city's cultural department and takes an active part in the music scene of Brno.
Image by TZ on Wikimedia under Creative Commons License.
2

The Center for Experimental Theatre (Centrum Experimentálního Divadla) is an umbrella organization that comprises three theatres from Brno: Theatre Goose on a String (Divadlo Husa na Provázku), Ha Theatre (Ha Divadlo) and Theatre at the Table (Divadlo U Stolu). Its aim is to promote the artistic values through theatrical performances, art galleries and cultural projects. The venue is very popular among theatre enthusiasts.
Image by Disco Cat on Flickr under Creative Commons License.
3

Galerie TIC is the ultimate source of cultural knowledge of Brno. The institution is the place where you'll find the latest news about upcoming festivals, shows and openings. Also on its premises there are different cultural activities such as expositions, art galleries, photo galleries, book openings and signings, art film premières and many more.

Image by Pitel on Flickr under Creative Commons License.
4

Mahen Library in Brno is one the biggest public libraries in the Moravian region. It also ranks second in the libraries of the Czech Republic. The library opened its doors for readers in 1921. It was named after Jiri Mahen, a Czech poet who has largely contributed to the establishment of the institution. Nowadays, the library comprises thousands of books and works of many great poets and writers.
Image by Lukáš Malý on Wikimedia under Creative Commons License.
5

Mahen Theatre (Mahenovo divadlo) is a Czech theatre situated in the city of Brno. The founding stone was laid on July 18, 1881. It was built in a combination of Neo-renaissance, Neo-baroque and Neoclassical architectural styles. Initially, Mahen Theatre was a German opera house, and it was called Deutsches Stadttheater (German City Theatre). In 1918, following World War I, it passed into the hands of the newly founded Czechoslovak state. It was renamed Divadlo na Hradbách (Theatre on the Wall) and the first dramatical advisor became the novelist and playwright Jiří Mahen, after whom the theatre has been named as of 1965. Since 1965, the theatre has served as the home stage of the dramatical ensemble of the National Theatre in Brno. Mahen Theatre, built as German Deutsches Stadttheater in 1882, was one of the first public buildings in the world lit entirely by electric light.
Image by Avfedorenko on Wikimedia under Creative Commons License.
Sight description based on wikipedia
6

Janáček Theatre (Czech: Janáčkovo divadlo) is a theatre situated in the city of Brno. It is a part of the National Theatre in Brno. It was built from 1960 to 1965, and opened in October 1965. During its existence, the theatre has premiered around 20 operas and ballet performances.

The building of Janáček Theatre, the youngest of the buildings of National Theatre in Brno, was planned from the early 20th century. From 1910 to 1957, seven architectural competitions were held to find the best design and project of the building. Around 150 architects participated in the competitions, among them several notable exponents of Czech arts and architecture: Bohuslav Fuchs, Josef Gočár, Vlastislav Hofman, Josef Chochol, Pavel Janák, Jan Kotěra and others. The proposed designs span a wide range of architectural styles documenting the history and development of the Czech architecture in the first half of the 20th century. The styles include historicism, Art Nouveau, Cubism, modernism, Functionalism, Socialist realism and classicising Neofunctionalism.

Image by Petr Šmerkl, Wikipedia on Wikimedia under Creative Commons License.
Sight description based on wikipedia
7

The Puppet Theatre Radost (Divadlo Radost) was established in the late 1950's by Vladimír Matoušek. During this whole period, the theatre had always proven to be interesting, funny and entertaining, and it is still continues to be. Its audience varies from young to old, and they are treated performances with puppets and marionettes.
Image by jaime.silva on Flickr under Creative Commons License.