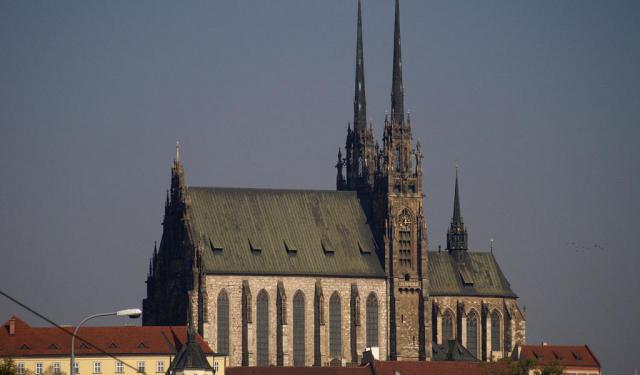 Image by JRodSilva on Wikimedia under Creative Commons License.

Religion has always played an important role in the lives of the Czech people. The large number of holy buildings in and outside Brno bear testimony to this fact. Some of them, such as Cathedral of Saint Peter, are quite imposing, and others, such as St. Johns' Church, are very traditional. Take this tour to explore the holy buildings of the capital of the Moravian region.
How it works: Download the app "GPSmyCity: Walks in 1K+ Cities" from iTunes App Store or Google Play to your mobile phone or tablet. The app turns your mobile device into a personal tour guide and its built-in GPS navigation functions guide you from one tour stop to next. The app works offline, so no data plan is needed when traveling abroad.

2) Church of the Holy Cross

The Church of the Holy Cross (Kostel Nalezení Svatého Kříže) is located on the Capuchin Square in downtown Brno. The holy building has been erected by the order of Capuchins in the 17th century in order to meet the needs of a growing number of followers of the order. The church was built in Baroque style and has a simple design. The main attraction of the church is the "Crypto Capuccinorum" (Capuchin crypt).
Image by Kirk on Wikimedia under Creative Commons License.
3

The Church of Saint Mary Magdalene (Kostel Svaté Máří Magdalény) was built in the 15th century on the site where a Jewish synagogue once stood. The city's records show that the synagogue had been occupied by force by the Franciscans and converted into the present church. The Franciscans have also gave it a new Romanesque touch and an adjacent tower.
Image by Jiří Sedláček on Wikimedia under Creative Commons License.
4

St. Johns' Church (Kostel Svatých Janů) is a Roman Catholic cathedral built by the Minorire order in the 13th century in the historical centre of Brno. Over the centuries, the church has undergone some major improvements, from Gothic to Baroque style and also a new chapel (Loreto Chapel) has been added to the construction. The church is popular among the locals due to its traditional baptizing and other interesting traditions.
Image by Fredericus on Wikimedia under Creative Commons License.
5

St. Michael's Church (Kostel Svatého Michala) is yet another church in Brno built by the Dominican Order in the 13th century. It is located on the Dominican square, thus making it very accessible and very visited by locals and tourists. After the swedish attack in 1645, it got a new Baroque appearance with the help of architect Jan Baptist Erna. The service is held regularly and everyone is welcome for daily prayers.
Image by Tibor Kádek on Wikimedia under Creative Commons License.
6

The Assumption of Virgin Mary Church (Kostel Nanebevzetí Panny Marie) is one of the 3 Jesuit churches that the Jesuit order has built in Brno. This church is also associated with the name of the Jesuit college, which played an important part in the history of the city by providing knowledge to the local peasants free of charge. The construction is one of the earliest Baroque buildings in Brno.
Image by Podzemnik on Wikimedia under Creative Commons License.
7

The St. James' Church (Kostel Svatého Jakuba) is a late Gothic architectural masterpiece and church in Brno. Its history dates back to the early 13th century. The church is the tomb of the famous defender of Brno - Louise de Raduit Souches. The church's ceiling is known for its numerous guild features, crests of noble families and various monograms. The holy building was declared a national cultural monument in 1995.
Image by Jiří Sedláček on Wikimedia under Creative Commons License.
8

The St. Thomas' Church (Kostel Svatého Tomáše) was established by Jan Jindřich, a Czech prince, and was originally an Augustinian monastery. This holy building is also the burial place of some great sovereigns such as Margrave Jobst. The building has changed its architectural design over the years, and its current Baroque appearance dates from the 17th century.
Image by Kirk on Wikimedia under Creative Commons License.