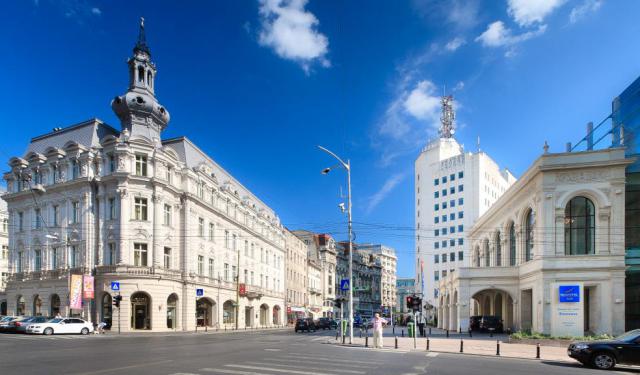 Image by Alstyle on Wikimedia under Creative Commons License.

Secluded from all the hustle and bustle of the city, rich in vegetation and alleys, Bucharest's parks are the places where you can relax and stay in harmony with the nature. Bucharest has plenty of parks with historic monuments and beautiful lakes that make it famous among other European cities. Take this tour to the most amazing parks of the Romanian capital.
How it works: Download the app "GPSmyCity: Walks in 1K+ Cities" from iTunes App Store or Google Play to your mobile phone or tablet. The app turns your mobile device into a personal tour guide and its built-in GPS navigation functions guide you from one tour stop to next. The app works offline, so no data plan is needed when traveling abroad.

Cişmigiu Gardens (Romanian: Parcul Cişmigiu) is a public park near the centre of Bucharest, featuring 17 hectares of green space surrounding an artificial lake. Its creation was an important moment in the history of Bucharest.

Established in 1847, at the time when Bucharest was still the capital of Wallachia, this is oldest and the largest park in the city. It was laid out on a site formerly known as Lacul lui Dura Neguţătorul ("Lake of Dura the Merchant"), or simply Dura. The pool it replaced had been a popular fishing ground from as early as the 17th century, and was inhabited by mallard colonies. Part of the present-day gardens was occupied by vineyard, which was planted around a water source: the latter had been tapped during the bubonic plague epidemic of 1795, when the two sons of Prince Alexander Mourousis took refuge in the largely uninhabited area.

The decision to replace the lake was taken in 1846, during a period of Imperial Russian administration introduced by Regulamentul Organic. It was based on an earlier proposal made by Russian governor Pavel Kiselyov in 1830, and various small-scale works had first been undertaken in 1837. The initiative, countersigned by Prince Gheorghe Bibescu, was part of a series of major public works, and the plan of the park itself dates back to 1844. On February 27, 1845, the area passed into public ownership by a princely decree. In 1843, Bibescu called on experts in horticulture and planning to join in the effort to restructure the city gardens; as a result, two citizens of the German Confederation, the horticulturist Wilhelm Friedrich Carl Meyer and his assistant, the gardener Franz Hörer, arrived in Bucharest, where their first work involved the floral arrangements on each side of Şoseaua Kiseleff. They were to become involved in redesigning the entire Dura area: Meyer was responsible for setting up the new lanes for planting new floral species, as well as for setting up a romantic landscape with rocks leading down to the lake.

The word “cişmigiu” is of Turkish origin: ceşme is a public fountain and cişmigiu (or cişmegiu) used to be a person responsible for building and maintaining public fountains. The name replaced older references to Dura, and was coined by the public because, at the time, the administrator of Bucharest fountains was living on the park grounds.

Cişmigiu continued to be developed by Meyer long after its official inauguration: in 1870, the horticulturist laid out a plan to redesign the lanes, to introduce an artesian aquifer, and to create a kiosk for an orchestra. He also proposed to have gondolas carrying visitors over the lake. By 1851, new species of trees were brought in: chestnuts from Gorj County, walnuts from Dâmboviţa County, and other plants from places such as Vienna and Braşov. At the same time, the lanes were reinforced with debris from the ruins of Curtea Nouă and Zlătari area.


Image by Mastermindsro on Wikimedia under Creative Commons License.
Sight description based on wikipedia
2

Being one of the largest parks in Bucharest, Izvorul Park is also one of the country’s main music venues. Located south of the city centre, the park represents a huge green area surrounded by broad boulevards that make it a suitable location for hosting concerts by international superstars, the likes of Madonna, Depeche Mode, Bryan Adams, etc.

The Palace of the Parliament, largest administrative building in Europe, stands in the middle of Izvorul Park, and was designed and almost fully completed under the Ceauşescu regime as the seat of political and administrative power.

Don't miss the opportunity to take a walk in this truly outstanding place.
Image by Quadell on Wikimedia under Creative Commons License.
3

Being the newest park in Bucharest, Venus Park is situated in a close proximity to the National Opera House. It is an ideal place for children and those who seek an oasis of peace by the water - the Dambovita river.

At the end of the nineteenth century, the land between the current Mircea Vulcanescu street, Dambovita embankment and Kogalniceanu Square were owned by Marghioala Procopoaia, daughter of colonel Canusis. Pocopoaiei Garden was very popular in those days. After her death in 1892, much of the land was taken over by the government in order to build a new railway station. The project never materialized, however, and in 1935 the Department of Law was built in its place.

Between 1928 and 1953 the site was occupied by the home stadium of the renowned local football club Venus Bucuresti.

In 1953, it became a military zone and all the buildings, including the cozy stadium, were demolished. In 1953 the building of the current National Opera was raised with a holding capacity of 2,200 seats.

Throughout 1880-1883, a total of 12 bridges were built over the Dambovita river, seven of them made of stone and the other five of iron.

Today, Venus Park is endowed with amusement machines for children and fitness devices for adults. Here visitors can exercise for free. Special attention should be paid to the osier fence that separates different areas in the park, as well as out of the ground roots of trees. During the night the park is lit by spotlights mounted in the ground.
Image by André Karwath on Wikimedia under Creative Commons License.
4

Eroilor Park is one of the best maintained parks in Bucharest, due to its privileged location in the city, close to the center and one minute away from Opera Square. The area is almost mythical because the blue sky above is reflected not in the water but in the gloss of the blue painted asphalt.

The area saw a remarkable development after the 1920s when the beautiful villas were built around, and providing the area with a peculiar shade. Eroilor Park is enclosed within the triangle formed by Dr. Rainer Street, Eroilor Sanitari Boulevard (Medical Heroes Boulevard) and the Independence Embankment. Apart from greenery, the area is marked by the presence of the Medical Heroes Monument. It is dedicated to doctors, medical assistants and nurses who participated in the First World War. The statuary group was inaugurated in 1932, four years after its creator, Raffaello Romanelli, had died.
Image by doljenco florian under Creative Commons License.
5

The Bucharest Botanical Garden, now named after its founder Dimitrie Brândză, is located in the Cotroceni neighbourhood of Bucharest. It has a surface of 17.5 hectares (including 4,000 m² of greenhouses), and accommodates more than 10,000 species of plants.

The first botanical garden in Bucharest was founded in 1860, near the Medicine Faculty [presently known as Carol Davila University of Medicine and Pharmacy], by Carol Davila. Its first director was botanist Ulrich Hoffmann, succeeded six years later by Dimitrie Grecescu. The garden was eventually moved to its current location in 1884 by Dimitrie Brândză, a Romanian botanist, assisted by Belgian landscape architect Fuchs. The garden was opened in 1891, after the greenhouses construction was complete. During World War I, the garden was used by German occupation forces and suffered great damage. In World War II it was hit by Anglo-American bombardments.

The garden houses the Botanical Museum located in the Brâncovenesc style building, by the entrance gate; it features more than 5,000 plant species, including 1,000 exotic ones.
Image by Miehs under Creative Commons License.
Sight description based on wikipedia
6

Small, cozy and truly relaxing, Rominceanu Park is deservedly regarded by locals as an oasis of tranquility. Sided by Military Academy and old villas among 5 storey apartment blocks, the park includes a small amusement place, a fountain surrounded by benches and lush vegetation. There are also a few tables where you can sit and play chess or cards, and a ping-pong table.
Image by Ovidiu Anca under Creative Commons License.