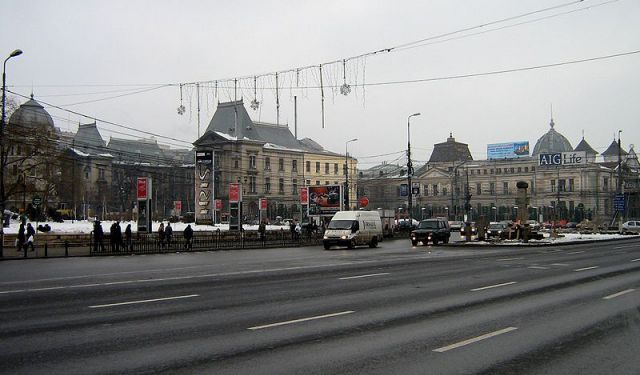 Image by Gabriel on Wikimedia under Creative Commons License.

Bucharest is a city where life centres around its numerous squares, from Charles de Gaulle Square in the north to Piața Unirii in the south. Each of these amazing squares has a lot to offer their visitors. Take this tour of Bucharest's main squares and explore Revolution Square, Victory Square, and many others listed herein.
How it works: Download the app "GPSmyCity: Walks in 1K+ Cities" from iTunes App Store or Google Play to your mobile phone or tablet. The app turns your mobile device into a personal tour guide and its built-in GPS navigation functions guide you from one tour stop to next. The app works offline, so no data plan is needed when traveling abroad.

Piaţa Constituţiei (Romanian for Constitution Square), also known as Palace Square, is one of the largest squares in the center of Bucharest, Romania. It lies in front of the Palace of the Parliament (largest building in Europe) and is bisected by Bulevardul Unirii (Union Boulevard) and Bulevardul Libertăţii (Liberty Boulevard). The square is one of the best open air venues for concerts and other public events (parades, etc) in Bucharest. Each year, there is a New Year's Party organized by the city mayor. World-class performers, such as AC/DC, Shakira, Leonard Cohen, Bon Jovi, The Prodigy, Judas Priest and Sting, have played in Piaţa Constituţiei. Lady Gaga performed here to a sold out crowd of 22,000 people on August 16, 2012 during her Born This Way Ball Tour.
Image by Simon Laird on Wikimedia under Creative Commons License.
Sight description based on wikipedia
2

Piaţa Unirii (English: Unity Square) is one of the largest squares in central Bucharest, located at the junction of Sectors 1, 2, 3, and 4. It is crossed by Bulevardul Unirii and was originally built, during the Communist era, as the Victory of Socialism Boulevard, but then renamed after the Romanian Revolution of 1989.

The square is a significant transport hub, containing the Piaţa Unirii metro station and a major interchange for RATB buses; there is also a tram terminal near the southwest corner. The Unirea Shopping Center, Cocor department store, and a large taxi stop are located on the east side of this square, while the Hanul lui Manuc hotel is on the north side, near the northeast corner. In the centre of the square is a small park with fountains which are particularly popular with commuters and passers-by in the torrid summer months. There were plans, at some point, to build in this place the Romanian National Salvation Cathedral, but the idea proved technically impossible, due to the busy underground environment, and had little support with the locals; thence the location was changed.

Image by Cristian Adrian on Wikimedia under Creative Commons License.
Sight description based on wikipedia
3

University Square (Romanian: Piaţa Universităţii) is located in downtown Bucharest, near the University of Bucharest.

There are four statues in University Square, standing in front of the University, depicting Ion Heliade Rădulescu (1879), Michael the Brave (1874), Gheorghe Lazăr (1889) and Spiru Haret (1932). The square was the site of the 1990 Golaniad, a peaceful student protest against ex-communists in the Romanian government. The demonstration ended violently when miners from Jiu Valley were called in by then president Ion Iliescu to restore order in Bucharest. The Ion Luca Caragiale Bucharest National Theatre and the Intercontinental Hotel (one of the tallest buildings in Bucharest) are also located near University Square.

Image by seisdeagosto on Wikimedia under Creative Commons License.
Sight description based on wikipedia
4

Revolution Square (Romanian: Piaţa Revoluţiei) is a square in central Bucharest, on Calea Victoriei. Initially known as Piaţa Palatului (Palace Square), until 1989, it was renamed following the 1989 Romanian Revolution.

The former Royal Palace (currently, the National Museum of Art of Romania), the Athenaeum, the Athénée Palace Hotel, the University of Bucharest Library, and the Memorial of Rebirth are all located here. The square also holds the building of the former Central Committee of the Romanian Communist Party (from where Nicolae Ceauşescu and his wife fled by helicopter on December 22, 1989). In 1990, the building became the seat of the Senate and since 2006 has accommodated the Ministry of the Interior and Administrative Reform.

Prior to 1948, an equestrian statue of King Carol I of Romania stood there. Created in 1930 by the Croatian-American sculptor Ivan Meštrović, the statue was destroyed in 1948 by the Communists, who never paid damages to the sculptor. In 2005, the Romanian Minister of Culture decided to recreate the destroyed statue from a model that was kept by Meštrović's family. In 2007, the Bucharest City Hall assigned the project to sculptor Florin Codre, set to create a new statue of Carol inspired by Meštrović's model (most consider it plagiarism).

In August 1968 and December 1989, the square was the site of two mass meetings which represented, accordingly, the apogee and the nadir of Ceauşescu's regime. The 1968 moment marked the highest point in Ceauşescu's popularity, when he openly condemned the invasion of Czechoslovakia and started pursuing the policy of independence from Kremlin. The 1989 meeting was meant to emulate the 1968 assembly and was presented by the official media as a "spontaneous movement of support for Ceauşescu", erupting in the popular revolt which led to the end of his regime.

Image by Dennis Jarvis on Flickr under Creative Commons License.
Sight description based on wikipedia
5

Piaţa Romană (Roman Square) is a major traffic intersection in Sector 1, central Bucharest. There are two major boulevards crossing the square, Lascăr Catargiu Boulevard (which runs northwest towards Piaţa Victoriei) and Magheru Boulevard (which runs south by southeast towards University Square). The two roads coincide geographically with the Bucharest Metro Line M2. The square is served by the Piaţa Romană metro station, on Magheru Boulevard. Dacia Boulevard runs roughly east-west through the square. Between 1997 and 2010, Piaţa Romană featured a Capitoline Wolf statue, a symbol of Latin culture. The statue has since been relocated to I.C. Brătianu Boulevard. The main building of the Academy of Economic Studies is located to the north of the square. Piaţa Romană is referenced to in the songs "Piaţa Romană nr. 9" by Nicu Alifantis and "Odă" by Omul cu şobolani.
Image by Mihai Petre on Wikimedia under Creative Commons License.
Sight description based on wikipedia
6

The headquarters of the Romanian Government (named Victoria Palace, after the square) is located here. Right across is the Grigore Antipa Bucharest Natural History Museum. There are plans to replace the parking lot opposite Victoria Palace with a statue of Maxim Pandelescu, general in the Romanian Army during World War II and notorious anti-communist guerrilla leader.
Image by Gabriel on Wikimedia under Creative Commons License.
Sight description based on wikipedia
7

Quito Square is located in the center of Bucharest, near Victory Square, right in the middle of Paris Street. The square is famous for the Monument of the Air located in it. This is the work of sculptor F. L. Gove (1937) that represents our planet Earth supported by the wings of four eagles and symbolizes a flight.
Image by Andrei Stroe on Wikimedia under Creative Commons License.
Sight description based on wikipedia
8

In the centre of the square stands Paul Neagu's Crucea Mileniului (Millennium Cross), built in the 1990s. In September 2006, on the occasion of the Francophonie Summit in Bucharest, the statue of Charles de Gaulle was unveiled. Sculpted by Mircea Spătaru, it stands 4.6 metres high and was financed by the Romanian government.

Herăstrău Park is located to the northwest of the square; Arcul de Triumf is located in its own square a few hundred metres to the west, on Constantin Prezan Boulevard; while Piaţa Victoriei, where the Romanian Government headquarters is situated, is located south, at the end of Aviatorilor Boulevard. The state-owned Romanian Television headquarters is located some 100 meters to the southeast, on Calea Dorobanţilor. The Primăverii neighbourhood, which used to include the houses of the Communist nomenklatura, is located to the northeast. Charles de Gaulle Plaza, an office building inaugurated in 2004, is located in the southeastern part of the square. Right beneath is the Aviatorilor metro station.

The square was originally known as Piaţa Jianu, after Iancu Jianu, a haiduc (brigand) and folk hero who fought together with Tudor Vladimirescu in the 1821 Wallachian Revolution. In 1940 it was renamed Piaţa Adolf Hitler, but the original name was restored shortly after 23 August 1944, when Romania joined the Allies and turned against the Axis Powers. However, following the Soviet occupation of Romania, in 1948 the name was changed to Piaţa Generalissim I. V. Stalin, lasting until the early 1960s, when Romania began to assert a more independent foreign policy towards the Soviet Union. A statue of Stalin stood in the square from 1951 until the summer of 1962, when four tanks and twelve bulldozers removed it from its place during a night. The square was subsequently renamed Piaţa Aviatorilor, Aviators' Square. The final change of the name happened in the late 1990s, when the square was named after Charles de Gaulle, leader of the Free French Forces and the first president of the Fifth French Republic.
Image by Biruitorul on Wikimedia under Creative Commons License.
Sight description based on wikipedia