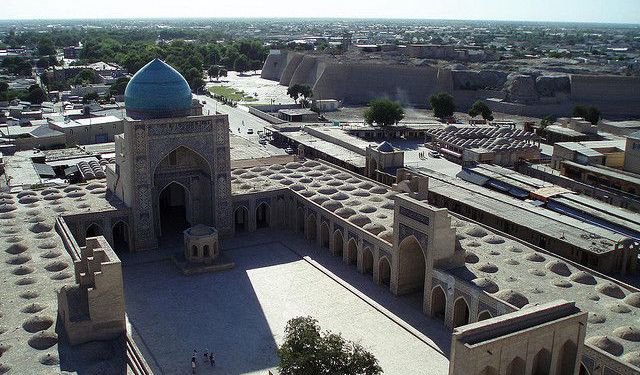 Image by zongo69 on Flickr under Creative Commons License.

Bukhara is a very important place for the Islam faith, having been at the center of the Muslim world during the golden age of the Samanids. Many mosques here date back centuries, with deep traditions and magnificent architecture. Thanks to its many mosques and madrasas, the historic center of Bukhara is a UNESCO World Heritage Site. Take our tour to see the most captivating mosques in the city.
How it works: Download the app "GPSmyCity: Walks in 1K+ Cities" from iTunes App Store or Google Play to your mobile phone or tablet. The app turns your mobile device into a personal tour guide and its built-in GPS navigation functions guide you from one tour stop to next. The app works offline, so no data plan is needed when traveling abroad.

Before a synagogue was built, Jews once shared part of the Magak-i-Attari mosque with Muslims. It is not known if both used the building at the same time or not. Before the Arab conquest there was a bazaar on this site – it was a market for idols, potions, spices and perfumes. There was also formerly a Temple of the Moon (Mokh) close to this place. In Narshakhi’s 10th Century history of Bukhara, he writes that the mosque was named Magak-i-Attari (“mosque in the pit”) because even then half of the building was concealed by rising soil levels.
Image by zongo69 on Flickr under Creative Commons License.
Sight description based on wikipedia
2

Image by Ipaat on Wikimedia under Creative Commons License.
Sight description based on wikipedia
3

Kalyan Mosque (Maedjid-i kalyan), arguably completed in 1514, is equal with Bibi-Khanym Mosque in Samarkand in size. Although they are of the same type of building, they are absolutely different in terms of art of building. The roofing (of 288 domes) of the galleries encircling the courtyard of Kalyan Mosque rests on 208 pillars. The courtyard ends up with a portal to the main chamber with a cruciform hall, topped with a massive blue cupola on a mosaic drum.
Image by Piero d'Houin on Wikimedia under Creative Commons License.
Sight description based on wikipedia
4

The Bolo-Khaouz Mosque is located opposite The Ark. It was erected in 1718 as a place of worship for emirs. Like many mosques in Bukhara, Bolo-Khaouz has a pool attached to it. The complex features a winter mosque, a summer mosque (built later, in 1917), a minaret and a pool. Look out for the beautiful ornamented ceiling and wooden columns of the summer mosque.
Image by upyernoz on Flickr under Creative Commons License.
5

The Balyand Mosque dates from the 16th Century. Encompassing both a winter and summer mosque, the complex’s name (meaning “high”) derives from the high stone area upon which it stands. Notice the distinctive interior of the winter mosque, which has a remarkable ornamented ceiling.
Image by Geoffrey Krause on Flickr under Creative Commons License.
6

The Namazgokh Mosque in southern Bukhara was built by Arslan-khan III in the 12th Century. It was only used for worships twice a year on religious holidays. Subsequently the building had to be rebuilt in the 14th Century and again in the 16th Century.
Image by Geoffrey Krause on Flickr under Creative Commons License.